A great idea and technical expertise will only get you so far with a startup if your government doesn’t support entrepreneurship.

To kick off Global Entrepreneurship Week, the event’s organizers and the Kauffman Foundation released the results of a global policy survey that looked at similarities and differences among entrepreneurs around the world and at how supportive their governments are of entrepreneurship.

“For governments to be smarter about how they help, they need better data, research, and analysis to identify and respond to the real barriers to startups and scale-ups,” said Global Entrepreneurship Week President Jonathan Ortmans. “This annual GEW Policy Survey is a small step toward asking entrepreneurs for their views on how these policymakers can be smarter in smoothing the path for nascent entrepreneurs and early stage firms.”

The reality is that governments must be active supporters and even participants in helping entrepreneurs turn their ideas into a reality. The goal of the policy survey was to begin gathering and publishing a standardized set of information that can inform government policies.

The 2,779 people surveyed were asked to indicate their experience on a scale of 1 to 7, with 4 being neutral. Overall, the survey’s respondents had a slightly negative entrepreneurial experience. 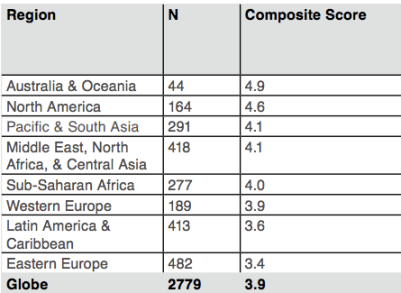 The average score was 3.9, with Australia and Oceania earning the highest composite score of 4.6, followed by North America with 4.6. Eastern Europe ranked last on the regional list, with a score of 3.4

The survey prompted people to indicate their level of agreement with 12 “entrepreneurship statements” (listed below) which asked about regulations and access to various types of resources.

Answers showed that the most common obstacles to starting a business are courts not resolving disagreements, tax laws, incompetent and dishonest business regulators, a lack of intellectual property regulations, and limited access to funding.

The regulatory environment clearly plays a significant role in supporting and promoting entrepreneurs, and these are some of the biggest challenges facing burgeoning startup markets like Brazil and Russia.

Canada was the only nation that ranked 8 or higher for every statement. Interestingly, Qatar ranked first for five statements, and between second and fourth for four. Nine of Egypt’s scores were in the top 10, which is a similar rank distribution to the U.S..

As Internet penetration increases around the world, so has interest in startups. The Internet creates powerful opportunities for entrepreneurs and governments to make money, solve problems, and move their economy forward.

Furthermore it is easier than ever to get an online business up and running. There are now scores of online resources for people wanting to acquire technical and business skills and for those who want to connect with mentors, fellow entrepreneurs, and investors around the world.

It is not enough to come up with an innovative idea and have technical prowess. If your country has extortive tax laws or a culture that doesn’t support entrepreneurial ideals (like creative-thinking, risk-taking, and acceptance of failure), if there is corruption, or if starting a business is extremely complicated, a majority of people will be deterred from doing it.