A little orange box that started in South Africa is now making it’s up across the continent.

Nomanini is a social enterprise company that sells a “business in a box.” The portable orange device is called Lula, and works as a digital vending machine for selling prepaid vouchers for mobile airtime, electricity, water, and insurance.

Today the company announced that it is entering Kenya through a partnership with Bambakenya — a local airtime provider. Bambakenya purchased 20 terminals as part of a pilot program and will use an army of Lula devices to expand its distribution. Nomanini said this is the first step in a larger plan for geographic expansion, and it is also looking at business partnerships with Zambia, Nigeria, and Tanzania to fuel growth. 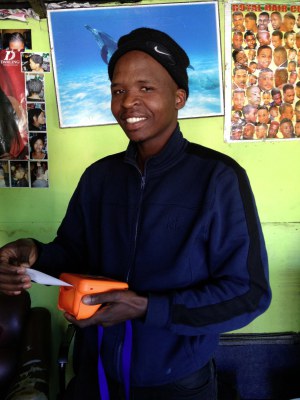 The World Bank described Africa’s financial services as “inadequate, inaccessible.” There is not a strong banking infrastructure and most people do not have computers, Internet access, or smartphones. Mobile payments is exploding as a result — Informa Telecoms & Media forecast that the number of mobile subscriptions in Africa will reach 1 billion before the end of 2015. Paying bills by purchasing scratch cards with mobile prepaid services is popular in Africa because it doesn’t require Internet access or a bank account to transact.

However reaching consumers remains a challenge. Vouchers are traditionally sold in stores, and Nomanini’s founder Vahid Monadjem saw an opportunity to improve access and distribution by giving people tools to sell on-the-go.

“There are about 200,000 minibus taxis driving around South Africa serving 20 million commuters everyday,” Monadjem told VentureBeat. “It occurred to me that the sale of prepaid vouchers could more efficient if we developed a solution that could be distributed to people on minibus taxis. Not only would you be providing a really important service for people living at the base of the [economic] pyramid who need these central services, but you would also be giving a massive sector the benefit of additional income.”

Owners can sell the vouchers anywhere, in minibuses, their homes, or even just walking around on the street. They deposit their earnings into a Nomanini account to reload the terminal and earn a commission on all of their sales. The terminal costs about $200 and is “built like a truck” to endure whatever Africa can throw at it. People use it to supplement their income. In December 2012, 40,000 people bought airtime through Lula.

Nomanini was founded in South Africa in 2011, and Monadjem said the company had received significant interest from people all over Africa. Forming local partnerships, like the one with Bambakenya, also enhances Nomanini’s distribution abilities because the company has allies on the ground  in new markets who are also invested in marketing the device.