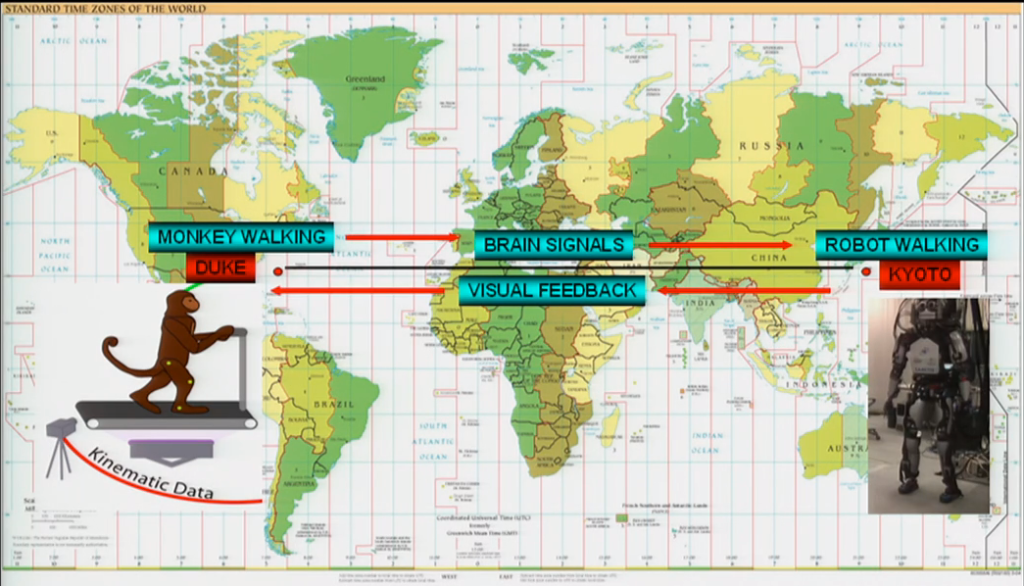 “This is the complete liberation of the brain from the physical constraints of the body,” brain-machine interface scientist Miguel Nicolelis says in a recent TED talk.

Nicolelis is a pioneer in neuroprosthetics and brain-machine interfaces at Duke University. He’s helped develop technology to “listen” to the brain, to individual neurons and groups of neurons. He and his team can detect when neurons are firing and find patterns in “brain symphonies” that he can then hook into machines. The result is that an animal — like Aurora, his monkey — can learn to control a virtual avatars and real-world machines with no physical contact. 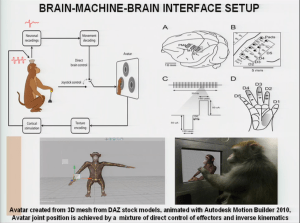 Above: The brain-machine interface

In 2003, working with Aurora, Nicolelis discovered that the monkey could teach herself to move a virtual hand on a screen in order to get a physical reward — a few drops of orange juice.

“The model of herself that Aurora had in her mind has been expanded to get one more arm,” Nicolelis says.

Expanding on that, Nicolelis had her control a monkey avatar on a screen, which worked by sending feedback directly to her brain “without the interference of the skin” when Aurora was touching or moving things. But more recently, Nicolesis “took this to the limit” by having a monkey run on a treadmill at Duke University in Durham, N.C., and control a robot in Kyoto, Japan.

“What happens here is that the brain activity that generated the movement in the monkey were transmitted to Japan and made this robot walk, while footage of this walking was sent back to Duke so that the monkey could see the legs of this robot walking in front of her, so she could be rewarded not by what her body was doing, but by every correct step of the robot on the other side of the planet.”

The meaning of this, according to Nicolesis?

“Our sense of self does not end at end of the cells of our bodies, but it ends at the last layer of the electrons of the tool that we’re commanding with our brains.” 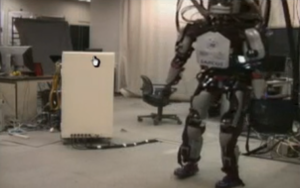 Above: And the robot walks!

The long-term goal? To restore the ability for people — quadriplegics and paraplegics — to control their own limbs again by bypassing the break in their spinal cord, and sending their brains’ commands to a “new body,” a robotic exoskeleton. It’s called the Walk Again project, and scientists in Europe, America, and Japan are working on it.

Perhaps, one day, we won’t even need the exoskeleton.

After all, as Nicolesis’ grandmother told him, “Impossible is just the possible that someone has not put enough effort to come true.”