He and the rest of the Mark One team have finally built a “smart cup” — the Vessyl — to identify, analyze, and track the liquids and beverages you consume from it.

When you pour a beverage into the Vessyl, it displays a few keys statistics about the content, such as what it is, calorie count, protein content, and so on. It does so with tiny (fingernail-sized) sensors that detect the liquid’s molecular composition. It then matches that information to a database of beverages. The company currently inputs this data manually, although it plans to start pulling in outside sources.

It also shows you where, once you’ve consumed the beverage, you’ll be in relation to your ideal hydration level. That level is determined through information about your body, health, and lifestyle in Vessyl’s mobile app. 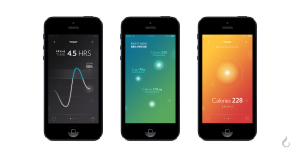 “With activity trackers now being common place and providing some really powerful info … we think that it’s really great information,” Lee told VentureBeat in an interview.

“This is the next phase of what we can be tracking passively that can really be helping our physical health,” he said.

“Pryme,” what the company calls the personalized optimal level of hydration, is at the core of the cup. The idea is that, just as people set “fuel point” goals or optimal activity levels on their wearable trackers, that optimal hydration level will be people’s North Star as they go through the day and consume various beverages and liquids.

Lee’s interest in building the Vessyl can be traced as far back as his childhood, inspired by his grandfather, who worked as a physician in philanthropic hospitals in China. “He was pioneering the usage of X-ray technology in China during the ’50s,” said Lee.

Lee then studied biomedical computing in college. While other people were putting computers into wristbands and other objects, Lee “wanted to put a computer inside a vessel.”

But Lee did more than put a computer inside a cup. During a trip to San Francisco in 2008 (Lee is from Canada), he met famed industrial designer Yves Behar and his fuseproject team and became inspired to create a lifestyle object that would incorporate his interest in health. This eventually became the Vessyl, which fuseproject co-designed.

Taking a closer look at what we eat

Other companies have also been working on tracking and analyzing what we put in our bodies. Orange Chef has garnered some fame for its iPad-connected “smart scale,” which the team designed as a tool for home chefs and folks who care about their diet. The Drop scale, also an iPad-connected scale, focuses on the science of baking at home.

And then there’s the Scio, a crowdfunded handheld sensor that can tell you the chemical composition of any food, drink, and pill.

In contrast, Lee and his team seem to be building a consumer product — not one aimed at advancing exploration, knowledge, and good old science. Sure, there’s plenty of science and technology in the Vessyl, but it’s clear that Lee and his team are spending equal efforts on making this smart cup a natural part of everyone’s life. Lee also said that he was excited to see Apple, a now-iconic consumer electronics brand, launch HealthKit last week and show interest in personal health.

The Vessyl’s preoders are now open, and the company is currently offering the product for $99, though it will later retail for $199.

That pricepoint is one possible hurdle to the Vessyl’s success. While Lee said he “wanted to make the Vessyl as accessible as possible” and that “the value of [it] will justify the $99,” many groups that would hugely benefit from it for health reasons won’t be able to afford this.

But one last question remains: Is Mark One’s team, which includes incredibly talented engineers from top lifestyle and technology companies and even a physician, really just there to build a smart cup with a nice design and an urban vibe, or is there more? Mark One has actually already closed an undisclosed seed round from some prominent investors it declined to name, so this can’t be all.

Lee did hint as much. But in the meantime, the team will continue its internal debate as to whether alcohol consumption is an area it wants to cover with its app (it’s currently not doing so).