(By Yukari Mitsuhashi, The Bridge) – At first glance this tiny device looks like an ordinary accessory, but this product is a little more specialized than it appears. Ontenna is a device that, when clipped to the user’s hair just like a hair pin, can convey the character of nearby sounds to the wearer using light and vibration. The device is being developed as an aid for people who have lost or were born without their hearing.

Sound conveyed through vibration and light to the user’s hair

When I was a kid, I had a few classmates at the school in the US I was going to who were deaf. Everyone in the class knew how to say a few things in sign language like “What?” and “Thanks.” One thing I remember particularly well was the disaster drills. The alarm would go off and it was so loud you had to cover your ears, but they couldn’t hear it at all. They only could tell that something was going on by looking around at their surroundings.

What if someone was alone in a situation like that? There’s no way to know. Ontenna may be able to fix that problem. The concept behind Ontenna is a device that can allow the user to feel sound through their hair kind of like how cats can sense movement in the air with their whiskers.

By translation sounds in the 30dB to 90dB range into 256 different levels of vibration and light, the pattern and quality of sounds can be expressed through light and vibration. Through this, the rhythm, pattern, loudness, and other qualities of sounds can be conveyed to the user. Just by clipping the device to your hair, deaf people will now be able to feel the sounds that they couldn’t hear at all before.

The developer of Ontenna is Tatsuya Honda, a UI designer who began his first job at a manufacturer. Prior to that, he was majoring in information and security in the School of Systems Information Science at Future University Hakodate in Hokkaido, Japan. Having a strong interest in art and design since from then on, in his graduate thesis research he was a member of the design office aiming to solve problems in society with the power of design and technology.

For Honda, the deciding factor with Ontenna was a chance encounter at his university’s culture festival. He happened to see a deaf person at the festival and decided to show the person around the university campus using gestures. Afterwards, upon parting, Honda was handed a business card, and invited to go to an onsen (public bath and spa) sometime (Hakodate is well-known for its onsen).

The person I had just met was the president of an NPO called Hakomimi.net, Hakodate Sound Visualization Research Society. I became very interested in deaf communication and I joined the research society. I studied sign language, volunteered as a sign language interpreter, and established a sign language circle at my university.

Thus Honda found himself exploring a new research theme, using technology and design to convey sound to deaf people, and beginning research at a 4th year university student in 2012 on what would become the Ontenna prototype.

With funding from government grants and 3D printing, 200 prototypes were made 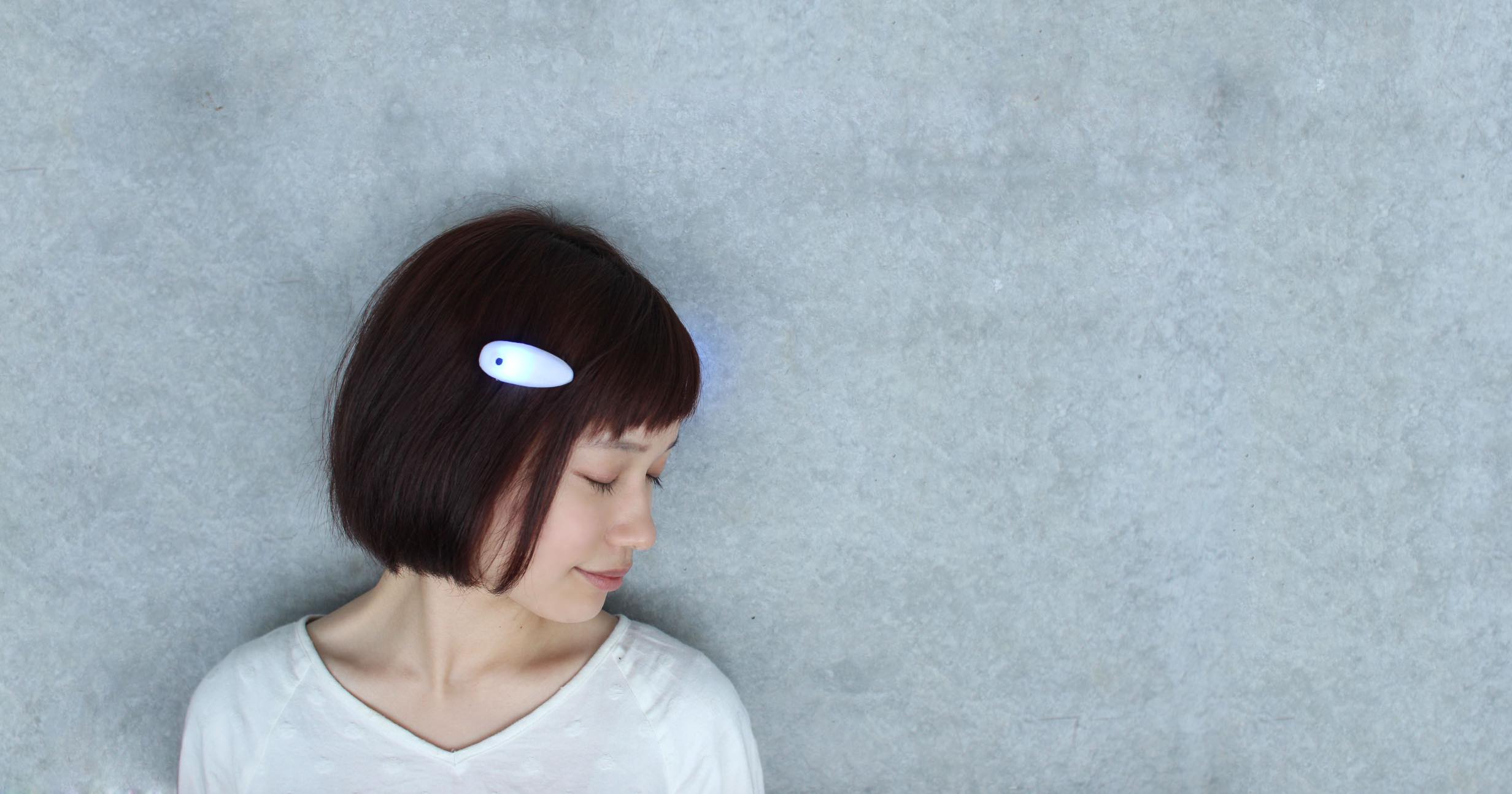 Last year, still continuing his research as a graduate student, he was selected by theMITOU Program, a bi-annual software engineering promotion program run by theGovernmental IT Promotional Agency of Japan. Using the funding gained through this, and by making use of 3D printing, he has produced over 200 prototypes. The result being an Ontenna that can be worn as a hair clip with very little difficulty or discomfort.

Honda’s project has come this far with cooperation and help from many deaf people. Even now, the most recent prototype is being tested through daily use for the purpose of collecting feedback. Though they have cleared many hurdles to get to this point, they say that still the most difficult problems to solve have been the shape of the device, and where it should be clipped.

The very first prototype of Ontenna was just a simple rectangular box in the shape circuit board. After receiving feedback from users voicing concerns about the angular sharpness of the device, the design has gradually come to the soft rounded form of the latest model. As for how to wear the device, feedback suggested an aversion to attaching the device directly to the skin because of possible irritation or discomfort. The next step was to try and have users attach the Ontenna to their clothes, but the result was that it was sometimes difficult to feel the vibrations.

Fingertips, arms… we tried a lot of different body parts. Deaf people use their arms and hands to communicate in sign language, so wearing the device in one of those places proved to be cumbersome. Through lots of trial and error, we finally came to the conclusion that wearing the device in your hair, which could easily sense vibration and wouldn’t directly touch the skin, was the best option.

There are two types of Ontenna models one which is worn in the hair like a clip, and the other which is worn as an earring. Originally there was only the hair clip model, but for deaf people who are old and may not have much hair, that model wasn’t practical, so they created another version which when clipped on the ear feels just like wearing a regular earring. 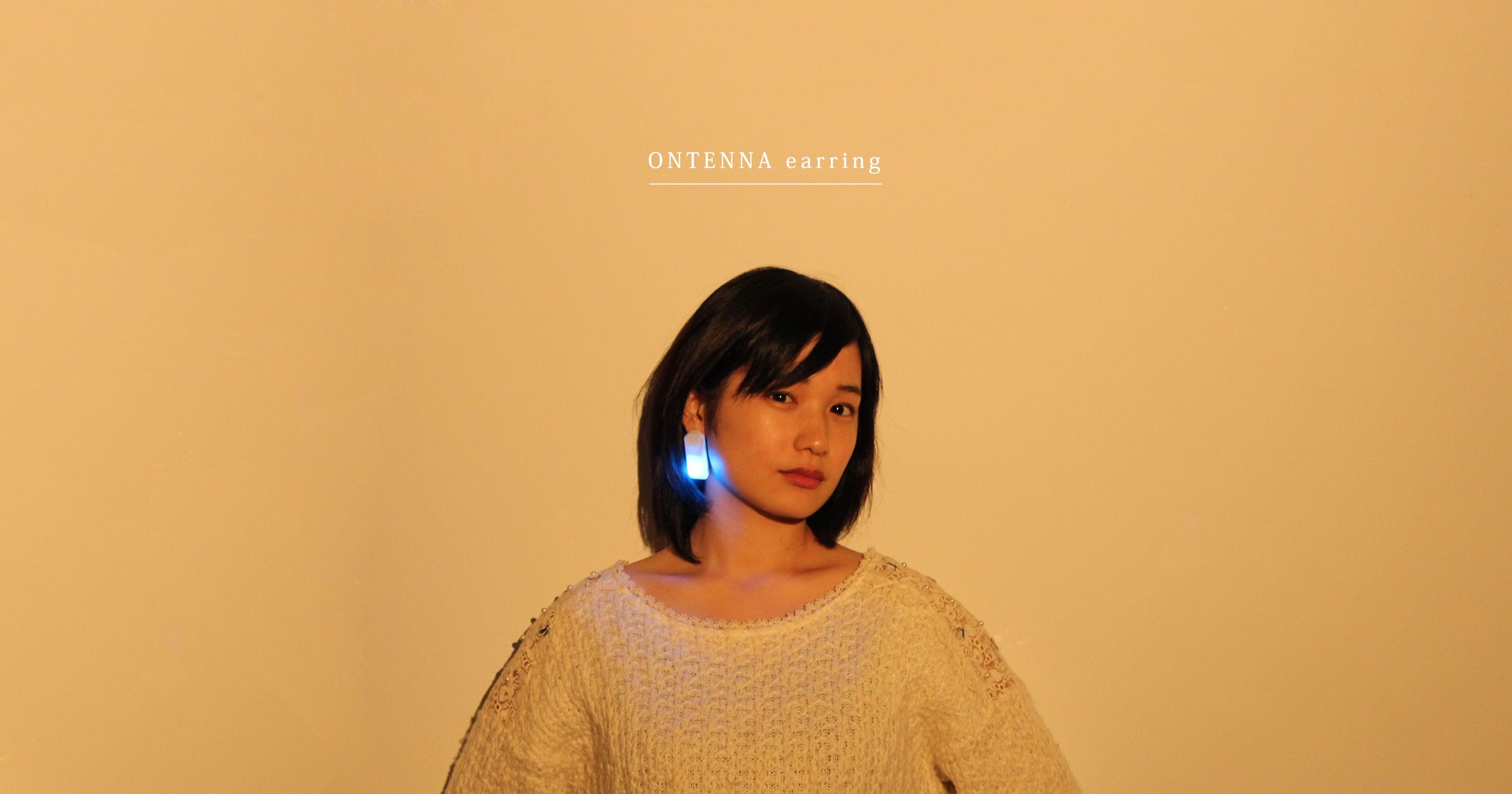 Above: The Ontenna earring model

“I felt like I could hear the sound of cicadas for the first time.”

Another difficulty during the development process was dealing with the strength of the vibration. An experiment was done with both deaf participants and those with normal hearing. With an Ontenna attached to both right and left sides, participants would indicate using a button which side a sound was coming from. In the experiment, it was found that with deaf participants, they could signal immediately which direction the stimulus sound came from and that the vibrations were very well tuned.

If the vibration is too strong it would cause some discomfort, but if it’s too weak it would be difficult to notice. With the current Ontenna model, it is built so that all sounds in the user’s surrounding environment are conveyed, which means if you were to go to a busy, crowded place like Shibuya, the device would constantly be vibrating. Dealing with different environments while still trying to convey sound with the appropriate level of vibration is something they’re still working to solve.

Positive feedback has been coming in from deaf users who wear the device at home or around town in their daily activities. By wearing Ontenna, users have aid they can now tell the difference between the sound of the intercom and the telephone, or realize for example if the cord to vacuum cleaner got pulled out of the outlet (see video above). For these users, by being able to sense sounds, a variety of difficulties are being overcome.

One girl who had tried Ontenna said something that really left a big impression on me. ‘At school I was taught that cicadas make a long buzzing sound, but I never knew what kind of rhythm or pattern that sound had until now. Once I put on Ontenna I felt like I could hear the sound of cicadas for the first time.’ I was really happy to hear that.

Could Ontenna be a part of the 2021 Deaflympics?

Questions from deaf people as well as the parents of children with hearing disabilities wanting to know when they’ll be able to buy Ontenna have been increasing.

That said, Ontenna is still a project that Tatsuya Honda in a collaborative effort has designed and developed at the research level. He still sees mass production as being a ways off, but while keeping an eye on future business cooperation, hopes to get Ontenna into the hands of as many deaf and hearing disabled people as possible, as soon as possible.

One long term goal with Ontenna has to do with the Deaflympics planned to be held in 2021. Not quite as well known as the Paralympics, the Deaflympics are Olympic Games for deaf people.

In the far future, I think it would great if athletes at the 2021 Deaflympics used Ontenna in competition. For example, track and field players could use Ontenna when working on the timing and rhythm of their strides to possibly improve their record. If Ontenna can be a part of these athletes setting new records, that would be so wonderful.

Translated by Connor Kirk and Edited by Masaru Ikeda