Beijing and San Francisco-based startup Landscape Mobile has launched a new app designed to help people “organize their digital lives” using nothing more than the screen grab function on their iPhone.

Available for iOS only just now, the aptly titled Screenshots uses machine learning to automatically pull in all screenshots on your device. It then separates them out into categories depending on which app they were captured in (Safari, Facebook, etc.) and by date, making it easy to find the screenshot you’re looking for.

For each screenshot you wish to tweak, simply hit the “Upload and analyze for text” button, and you’ll then have access to all the text within the specific image, which you can delete, edit, or share to all the usual social networks, or store in a note-taking app such as Evernote. 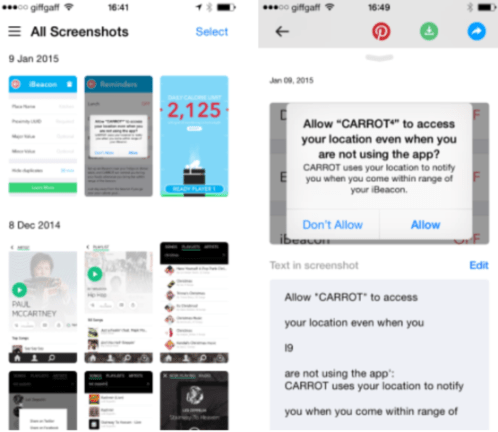 The app basically separates out the core elements of a screenshot, so you have just the image if you wish, just the text, or any hyperlinks contained within.

There are a number of use-cases for Screenshots. Say you see a Facebook post or recipe online that you really want to share by email or to another social platform such as Pinterest. This app lets you snap a picture of the post and remove or edit any irrelevant information such as text or ads.

“A screenshot is no longer an image with pixels, but a rich set of interesting data,” explains CEO Yue Zhuge.

Certainly, Screenshots does do a lot of the so-called “heavy-lifting” required in tearing a screenshot apart into its core elements. And even if you have no desire to share or edit any of your screenshots, the app is a useful tool in itself for organizing your screenshots.

Landscape Mobile was cofounded by Zhuge, a Stanford computer science graduate and former Yahoo and Microsoft employee in the U.S. and China. Last summer, the first fruits of the company emerged in the form of a mobile app called Sight, which lets users clip and save things from the Web to read later using nothing more than screenshots. The company also announced a $1.9 million seed round last year, led by IDG Capital Partners.

But how can a simple screenshotting app with a few value-added functions seriously monetize in the long-term?

“We’ve thought about that,” Zhuge tells VentureBeat. “Screenshots is a tool, so it may play well with freemium model. Once we build up the volume, we could potentially charge premium users.”

So this could mean those who process a lot of screenshots will pay something. For now, things will remain free until they figure out what users actually want, and explore other potential monetization conduits.