But an tiny upstart company in Irvine, California just might unseat them all.

Formerly based in Paris, France, the 11-employee Altadyn moved to Irvine several years ago. And CEO Darius Lahoutifard is competing with much more established players using the web’s secret weapon — free. And APIs, of course.

“We’re WebEx in terms of process, but Google Hangouts in terms of technology and scalability,” Lahoutifard told me this morning about his new product, Business Hangouts. “So we’re able to handle up to millions of simultaneous viewers … and our standard version is free for up to 20 people simultaneously in a session.”

The magic of APIs makes it all possible.

Altadyn uses the Google+ API, the Hangout API, and the YouTube API to make such massive-scale — and cheap — hangouts possible. But the company also incorporated social login with the Facebook, LinkedIn, and, of course, Google+ APIs to make it simple for people to join a conference and not have to sign up manually.

The result is a global video-conferencing system using industry-standard technology which Lahoutifard says is “ten years more advanced than WebEx” … and open APIs to deliver video to tens, thousands, or even millions of people simultaneously. 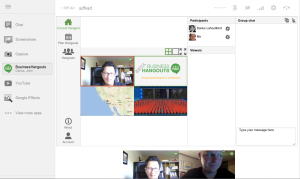 Above: The traditional video-conferencing look

“As far as I know we are the first ones doing this,” Lahoutifard says.

Of course, web conferencing is much more than a Hangout or a Hangout on Air. Businesses expect and require features such as customizable registration pages, logo overlays on streaming video, moderated chat, and host-controlled volume and video controls, all of which Altadyn has overlayed on top of Google+ Hangouts. The company has also added a 3-D avatar version which is somewhat Second Life-ish, allowing companies to hold virtual conferences in virtual auditoriums where you can virtually put your hand up to actually address the group.

The company just launched into public beta last week, fine-tuning the technology with a few thousand test users, and will launch publicly as soon as it freezes the feature set.

When it does, this little-known company has the potential to shake up web video conferencing, because creating an account and starting small-scale videoconferences with up to 20 participants is free, does not require a credit card, and uses technology and processes almost all of us are already familiar with.

“It’s bridging the gap between traditional webinar platforms and Google Hangouts — which is very innovative, by far the most advanced technology, able to handle up to millions of simultaneous viewers —  but which has been designed for Google+ for casual and informal hangouts,” Lahoutifard says.

The company is targeting both existing Hangout users who are bumping into Hangout limitations such as no real registration model, no ability to make private recordings, and limited management capabilities, as well as the traditional webinar creators who “have had enough” of WebEx type solutions.

Of course, there is a revenue model.

“Plus, being in the Google Hangouts ecosystem you can mix us with other apps,” Lahoutifard told me. “You can activate a prepared logo, namebar, and presentation title, or you can show a PowerPoint.”

“Sorry Google, I still use PowerPoint.”