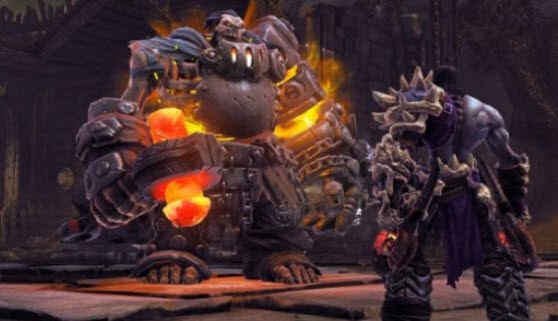 Struggling video game publisher THQ reported a smaller loss than analysts expected, but it also warned that some of its upcoming titles need some extra polish. That could mean some delays for several of its future games.

THQ said on the call it will no longer provide earnings and sales guidance, and it is withdrawing its previous guidance for 2013.

“Clearly, THQ faces a number of opportunities and challenges,” added Brian Farrell, THQ’s chairman and CEO. “I am confident about the opportunities that lie in our robust slate of games and in our studios. But we also face challenges operating with limited capital resources in the highly competitive market for games, and we are working diligently to resolve those challenges.”

In a conference call, Farrell said that Darksiders II sales were below expectations, but that THQ saw better sales of catalog games such as Saints Row The Third, which has now topped 5 million copies sold. Other digital sales of catalog games were also higher than expected. Meanwhile, big cuts to the staff resulted in a better bottom line.

Digital revenues for the second fiscal quarter were $19.1 million, or 21 percent of total sales, and up 34 percent from $14.3 million a year ago. THQ ended the quarter with $36.3 million in cash and borrowings of $21 million on its line of credit.

THQ said that Darksiders II, which received a Metacritic (aggregate review) score of 83 out of 100, shipped 1.4 million units in the quarter. THQ said it delayed South Park: The Stick of Truth — a major game in the works — from March 5, 2013 until early fiscal 2014. And both Company of Heroes 2 (see our preview of the game here) and Metro: Last Light have been pushed back to ship in March, later than originally planned. Part of the reason is that the games have been reviewed by new company president Jason Rubin, and he asked for some changes in the games.

“When I joined THQ the company made a public commitment to quality titles. We always expected that in some cases this would mean that more time would be needed to make sure that every title is of the highest possible quality,” said Rubin in a statement. “Our fourth quarter releases are the first titles that I have had the ability to materially impact, and experience told me that the games needed additional development time to be market-ready.

Rubin added, “I believe South Park’s market opportunity is significant. It is shaping up to be one of the most anticipated titles of calendar 2013. It is also an expansive title, encompassing multiple television seasons’ worth of content. We have been working closely with the co-creators of South Park, Matt Stone and Trey Parker, to make sure all of the game’s content performs to the high standards of the TV show, and this takes time. THQ is committed to giving gamers no less than the rich South Park game they have been waiting for and deserve.

“We are also inspired by the potential for Metro: Last Light and Company of Heroes 2. I believe Metro: Last Light is a title that should set standards for visuals with its stunning atmosphere, unique location, and cutting-edge style. Company of Heroes was one of the highest rated [real-time strategy] titles in history, and Relic insists that the sequel live up to its pedigree. Giving both of these titles time to reach their full potential is the right thing to do for the products.”

Finally, Rubin said, “THQ is excited about our position and pipeline of games beyond fiscal 2013, including the sequel for Saints Row: The Third, Homefront 2, and the as-yet-unannounced game from Turtle Rock Studios. In total we have 10 titles in development for fiscal 2014 and later, almost all of which are based on our own IP. We intend to announce more details about our future slate in the coming months.

“I firmly believe releasing our fourth quarter titles without extra time for polish in the current environment would lead to underperformance that could in turn lead to future additional capital shortfalls. But extending development schedules in order to make the best possible titles also has financial implications. Yet there can be no doubt which path has the greatest chance of leading to the long-term success of the company. We must follow the course that generates the highest quality games, and will establish THQ as a mark of quality for the consumer.”