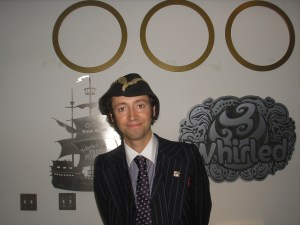 It’s the latest casual online gaming site to let players build their own virtual rooms, create virtual goods and games, and cash in on those virtual products. Rather than a continuous virtual world, it’s more like a collection of virtual rooms.

In Whirled, you can set up a shop in your own room. You can create your own mini games or animated Flash-based objects and sell them either for “Bars” (which users purchase with real money) or another currency dubbed “Coins” (which players earn via achievements in the site’s various mini-games). You can also accumulate a third currency, Bling, which can be traded in for real money. Three Rings handles all of the necessary billing and payments. Having three currencies equalizes the fun for players who may not have a ton of cash, and it also gives players incentives to create virtual goods. 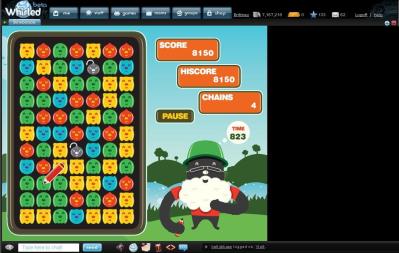 The site features 12 “example” games that show players what is possible as they create their own games.

Creators set their own prices for the goods they produce and get a third of the virtual transaction price, Three Rings keeps a third, and a third goes to the affiliate (shop owner) who initiates the sale. Typical items go for maybe 10 cents.

Since launching the Whirled beta in March, there are 15,000 active users logging in each day. So far, 60,000 have registered with very little promotion.

While other virtual room sites focus on socializing—Vivaty, WeeWorld, Lively by Google, IMVU, Gaia Online and Habbo Hotel—Daniel James, chief executive and founder of Three Rings, said that Whirled will focus on games and virtual trading.

Slowly but surely these virtual room sites and others like Club Penguin, Neopets, Meez, Metaplace, and Runescape are proving that alternative business models can work in the video game industry. San Francisco-based Three Rings (named after the Elven rings in The Lord of the Rings) has delivered successful games in the past, but its challenge with Whirled is to attract a large-scale audience so it can compete with the much bigger players in this crowded market. 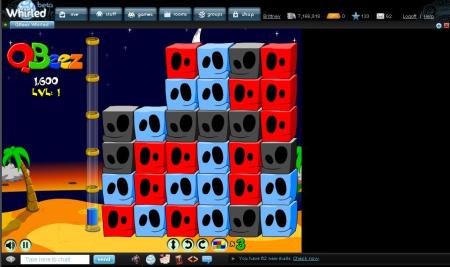 “This is a new media, and my hope is that small independent companies like ours will define it, just as Google grew up and defined search,” said James. “I believe that in 10 years, the virtual goods model will be the dominant platform in games.”

The site is browser-based and has a considerable amount of open-source software. Three Rings is publishing the details so that developers can create their own applications on the Whirled platform, which runs on any browser. The rooms are pseudo 3-D places that users can decorate. Users can build their own cartoon-style avatars, or characters, and fashion themselves and their rooms with virtual clothing or furniture.

James was an early believer in the virtual goods business model. He founded Three Rings on a shoestring budget in 2001 and pulled off what seemed impossible: creating a massively multiplayer online game as an independent developer. He did so by focusing on simple, casual game interaction at a time when other MMO companies were creating truly massive virtual worlds.

The company launched its first game, Puzzle Pirates, in 2003 as a game with free play as well as larger sections that required a paid subscription. In the game, players sail pirate ships and solve puzzles to perform basic tasks such as raising the sails, pumping bilge water, and attacking other ships. In 2005, the company added micro-transactions, where pirates could sail the oceans and pay with doubloons, a virtual currency in the game, for as little as 20 cents per transaction. Players can go to islands and harvest wood or fruit and then turn it into a virtual good that they can trade.

The game was a success because the new micro-transactions enabled the company to extract money out of the entire base of players, not just the ones who signed up for subscriptions. Today the pirate game still has 200,000 active members, including 75,000 who subscribe. The game generates about $350,000 a month in revenue and its gross margins are about 80 percent. Three Rings followed that up with the wild west game Bang! Howdy, which wasn’t as successful. Altogether, Puzzle Pirates has generated more than $14 million in revenue.

Those numbers aren’t much to brag about, and it’s an example of how long it takes for virtual goods sites to take off in the U.S. compared to China and South Korea. But James is quite happy with the growth and the lessons that have come with being a scrappy pioneer in the market. Fostering his pirate image, he loves to dress up as a buccaneer, donning his pirate hat and outfit at numerous video game conferences and parties.

“What matters is not the numbers, but how engaged we can keep our core group of users,” James said.

The company now has 39 people on staff and has raised $3.5 million in funding. Investors include True Ventures, Amicus Capital, Mercury Capital Partners, angels and Chance Technologies, the Accel seed fund run by Richard Wolpert. James said he doesn’t expect to raise another round until about the second quarter of 2009.

“VCs are looking for real traction, with revenues and not just users now,” he said. “There is a flight to quality and we think that will play into our strength in monetizing users.”