Through the Darkest of Times has the simplest of graphics. It has black-and-white hand-drawn images for its art. But it is a very moving game about the darkest period of German history, starting in 1933 when Hitler came to power.

Your job is to take command of a small resistance group in Berlin. You have to survive and challenge the Nazi regime until the end of World War II. It’s not a Wolfenstein shooter game, but it is intense and scary in its own way.

The turn-based strategy game is coming from Handy Games, a German game publisher that was recently acquired by THQ Nordic. It is being created by a Berlin-based studio dubbed Paintbucket Games, which includes former Yager developers who worked on Spec Ops: The Line: Jörg Friedrich and Sebastian Schulz. I played it at a THQ Nordic preview event, and it will be on display at the Electronic Entertainment Expo (E3) game trade show in Los Angeles this week. 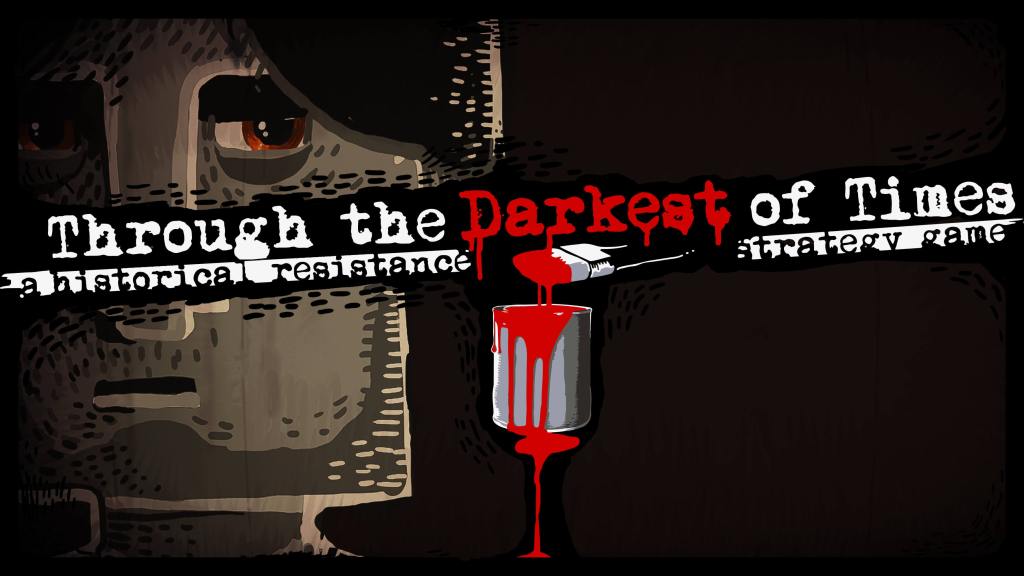 Above: Beware of the secret police in Through the Darkest of Times.

The title is a strategy game where small choices matter, as you have to gather support from the population by taking risks, but you can expose yourself to danger if you are caught. The game ends for one of your resistance members if the Gestapo comes knocking on your door.

You may ask if this kind of game is “fun” or not. But it certainly is meaningful. Earlier, I emailed the Handy Games CEO, Christopher Kassulke, about why he greenlit the title.

“As a German, long born after World War II, I had to answer often the question to foreigners around the world how that could have happened and why no one stood up against such an evil regime. When I look around the world not naming any specific country or president I have the feeling that we have not learned a lot from the history,” Kassulke said. “Games are one of the most powerful media of our current generation. You will think several times if your decision is right or not in Through the Darkest of Times.” 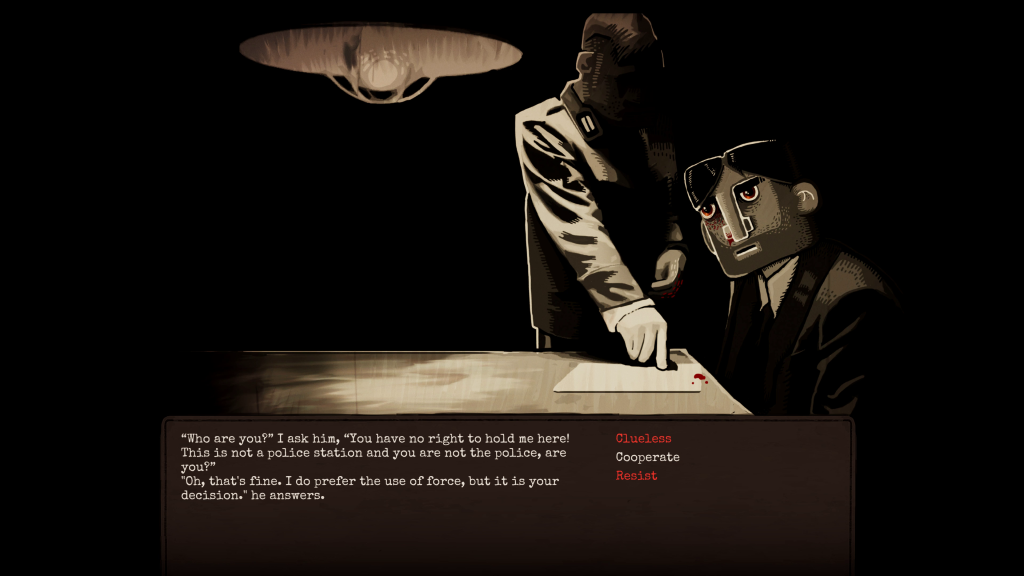 He added, “You will think so often how would I have reacted nowadays — would I really have done that? It is ‘just a game’ but so powerful and important. I heard from several publishers that the game is great but the topic is too complicated. In their opinion you just cannot do such a game, it would not sell well and partners and press will not support it. Honestly, we as publisher had to do it and we as a team would do it again.”

I first saw the game at PAX East and interviewed Florian Emmerich, a spokesman for Handy Games at the event in Boston. And now I’ve had a chance to play. Above: A map of Berlin with tasks to do.

I started out with a cell of five people. They were illustrated in a “Weimar” style as ordinary people who were carrying a weight on their shoulders. Each of the five people had different skills. Some were good with people. Others were skilled in a trade. They were not trained fighters. They had roles in everyday life like a plumber, a lawyer, or a clerk.

Each of your team members has 3 different attributes: Secrecy, Propaganda, and Empathy. Every mission requires one of these stats, and as your characters gain experience, their attributes will continuously improve. You also have various resources such as money, supporters, morale, and energy. You can lose the game if all of your supporters become demoralized.

They have to achieve certain tasks or risk losing people who are supporters. They need to raise money, but even going out and asking friends in a network for money is risky. If the Gestapo suspect you, then they may bring you in for questioning. 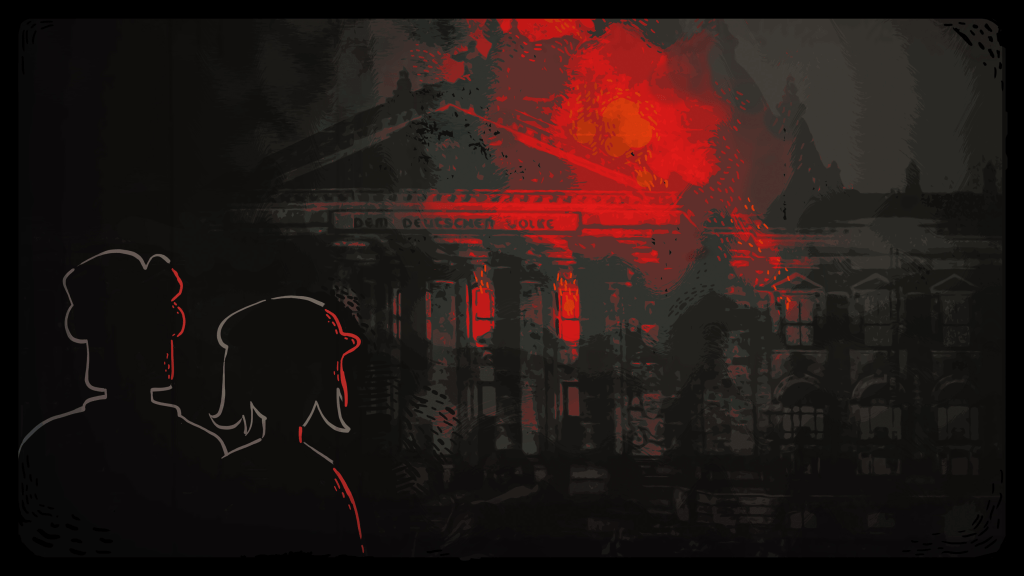 Above: The burning of the Reichstag was blamed on the Jews and communists.

That happened to one of my followers. He was arrested and then died in custody. The game’s map of Berlin is pretty crude, with some buildings and abstract representations of tasks. The missions are color coded. If it is marked green, it is low risk. For higher risk, it is yellow, and for the highest risk, it is red. I performed a bunch of the green missions, and I was successful.

I sent my people out to raise money. And I sent some out to drop leaflets, print propaganda, paint messages on walls, and to spy on the Nazis. There was no option to get guns and march in the streets, as that would have been suicide.

With each turn, you get some bad news. The Nazis burn books, arrest Jews, or the Reichstag, the home of the legislature, burns down. You can choose to find out more about what has happened, or you can go home and lie low. It seems random as to whether or not you are discovered. But that seems realistic in terms of what Nazi Germany was like. But the question is whether you can truly achieve much in the game without losing your head.

In the first playthrough of the game, you follow the course of history. But in a second playthrough, you can unlock other options for a different outcome in history.

It’s a very simple game, but it carries an important message. Right-wing governments are gaining power in the world, and that’s a troubling thing. It’s troubling to play Through the Darkest of Times, but it’s also eye-opening. It gives you an appreciation for what it was like to live under a totalitarian government and to attempt to take it down.

The game will debut on the PC, and a launch date has not been set. I’m very anxious to see what it’s like to play the full game.