About $47 billion’s worth of items are lost each year, and most people spend nearly a year of their life looking for their lost things. That’s according to Tile, the San Mateo, California-based startup that today announced it closed a $45 million in series C funding led by private equity firm Francisco Partners (which has acquired a minority stake), with participation from existing investors GGV and Bessemer and new investors Silicon Valley Bank and Bryant Stibel. CEO CJ Prober said the infusion, which brings Tile’s total raised to over $100 million following a series B totaling $43 million across two rounds, will accelerate international growth and the onboarding of new partners while providing a runway for forthcoming products in new categories.

“Millions of users already trust us to safeguard their belongings and find misplaced items — we will continue to deliver on that promise and more,” said Prober. “This investment ushers in a new chapter for Tile: With new products and expanded partnerships, we can better solve the everyday pain point of losing or misplacing the things that matter most to our global customer base.”

It’s nothing short of a miraculous turnaround for the Kickstarter-backed Tile, which in early 2018 laid off dozens of employees from a workforce of over 100 after disappointing holiday sales. Prober, a longtime GoPro veteran, replaced Tile cofounder Mike Farley as CEO in September, who then became a strategic adviser to the company.

Last October, Tile refreshed its flagship trackers — the Tile Pro and Tile Mate — with Bluetooth 4.0 models featuring coin-cell batteries and plastic exteriors that can withstand high humidity, water exposure, and 1,000 cycles in a tumble dryer. (They complement the Tile Slim.) The Mate has a range of 150 feet (up from 100 feet) and a speaker that’s 100% louder than the outgoing model’s, while the Pro boasts double the range (300 feet, up from 200 feet) and a speaker twice as powerful (90 decibels) as the new Tile Mate.

As with the company’s previous trackers, the latest Tile devices can be located beyond the 100-foot Bluetooth range using so-called “crowd GPS.” If an item with an attached Tile is reported lost and comes within range of another user’s Tile, the nearby user’s Tile companion app will send the item’s owner an anonymous update of that item’s location. 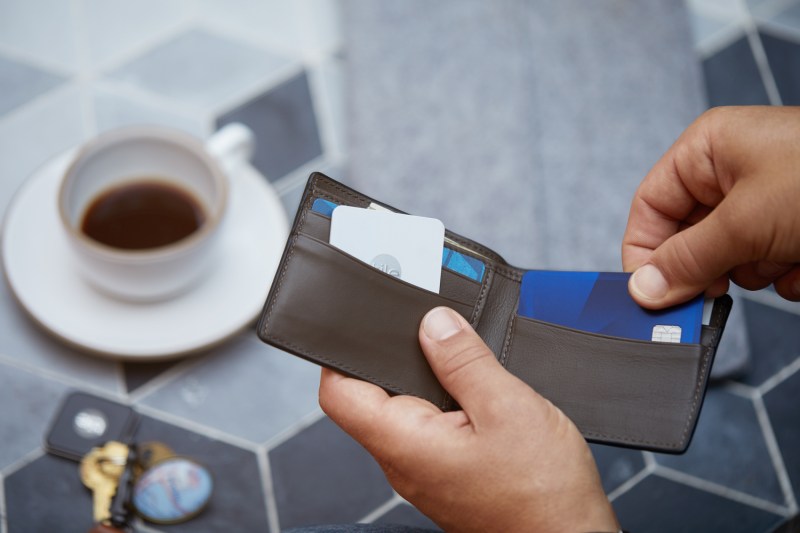 Above: The Tile Slim.

Tile also announced last year Tile Premium, a $30-a-year (or $3-a-month) subscription service that adds functionality to the company’s new and existing trackers. There’s Smart Alerts, which notifies users with a text message when they leave a geofenced area (e.g., home or work) without a Tile, and Location History, which shows a map of addresses of all the places Tiles have been in the last 30 days. That’s in addition to priority customer care via phone, a battery replacement program that supplies Mate and Pro owners with new batteries once a year, and an extended three-year warranty program.

Premium was partly motivated by Tile’s growing partner business, through which it supplies tracking tech to third-party manufacturers like Herschel, Bose, Nomad, Skullcandy, Sennheiser, Qualcomm, and Blunt Umbrellas as well as semiconductor giants like Qualcomm, Nordic, and Dialog. It doesn’t charge a licensing fee, and so it hopes to recoup some of the ongoing costs from end-user subscriptions.

Tile is far from the only smart tracker startup looking to expand its slice of the global market, of course. It’s got competition in TrackR, which last December rebranded to Adero and launched a new connected tag system with proactive notifications, and Chipolo, which in January launched a water-resistant tracker — Go — that combines Wi-Fi, LTE, and Bluetooth for improved tracking. That’s not to mention Lugloc, Lapa, LassoTag, Pebblebee, Innova Technology’s Protag, Tago, ThinkRace Technology, Pixie, and dozens of others.

Tile isn’t concerned, though, and perhaps it shouldn’t be. To date, it’s sold more than 25 million Bluetooth-enabled trackers (up from 10 million in mid-2017), which locate 5 million unique items daily across 230 territories with a 90% success rate. Its devices make up 90% of retail distribution. And last year, Tile teamed up with the San Jose Airport to track items across the facility and strategic investor Comcast to locate Tiles through its xFi Advanced Gateway routers.

“Tile pioneered the smart location category,” said Francisco Partners partner Andrew Kowal. “With Bluetooth technology projected to be included in nearly 30 billion devices shipping in the next five years, Tile is poised to deliver an embedded finding solution for a rapidly expanding market. We are extremely excited to be partnering with Tile as the company enters the next chapter of its growth story.”