Tilt Five is picking up where CastAR, the augmented reality startup that shutdown in 2017, left off. And now Tilt Five, run by CastAR cofounder Jeri Ellsworth, is launching a new Kickstarter crowdfunding campaign for a new set of AR goggles for tabletop board games.

Ellsworth said in an interview with GamesBeat that she and a small team managed to acquire the assets of CastAR from a bank that owned them. That small team of five people has been working on making a new version of the AR glasses to launch for $300 next year. The glasses project 3D holographic images in front of your eyes, and that makes it feel like you’re seeing a virtual layer on top of the real world or like you’re immersed in a virtual world.

“We got crashed into the ground really hard, but the core team knew it was a good product,” said Ellsworth, in an interview. “So myself and some other folks pulled our money together and then got to work. We were not ready to let it go. A group of us went to negotiate to get the content back. It was an unfortunate situation.”

She added, “But in the long run, now that I am the CEO, I get it [and can] run the company the way I want and focus it.”

Ellsworth is CEO of the new company, which is based in Santa Clara, California. She and Rick Johnson dreamed up the technology for CastAR while at Steam creator Valve. But Valve opted to focus on virtual reality instead, and it spun the technology out to Technical Illusions, a company that Ellsworth and Smith started. In 2013, they raised $1 million from 3,000 consumers in a Kickstarter campaign. But the company developed broader ambitions.

In 2015, the renamed CastAR raised more money from Android creator Andy Rubin, moved from Seattle to Mountain View, California, and returned the Kickstarter funds to consumers. The company brought aboard new executives and hired a game development team from the closed Avalanche Studios, which shut down in 2015 after Disney canceled its Disney Infinity products.

The company grew to more than 90 people, but it eventually ran out of runway and collapsed. Ellsworth said a bank took ownership of the assets. But she and some others who believed in the technology — like cofounder Amy Herndon — bought back the assets from the bank and then began working on the new company in November 2017.

During a break between the companies, Ellsworth, a self-taught hardware designer, worked on a flight computer for a rocket. But she decided to go back to the AR technology in part, she said, “because it’s not rocket science.”

A focus on tabletop games 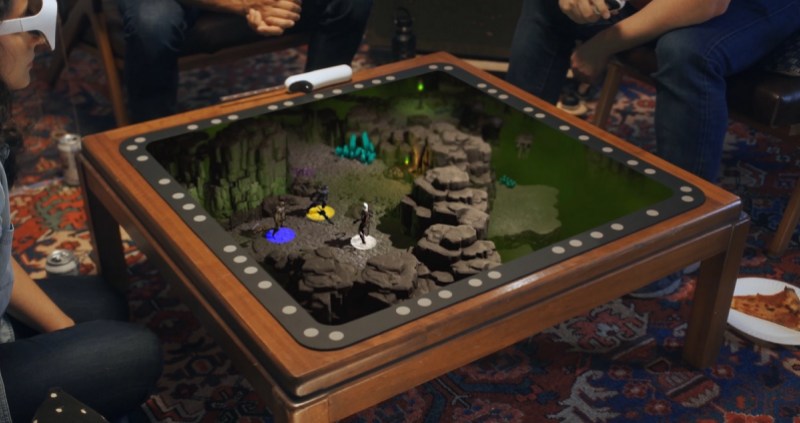 At Tilt Five, Ellsworth decided to focus on the tabletop gaming market, which is in the midst of a revival. The idea is to combine digital gaming with the social nature of tabletop games — much like what rival The Last Gameboard is doing with Gameboard-1. But Tilt Five is working on its own games and with other developers to make AR games that use the CastAR technology.

Players of cardboard tabletop games will be able to enjoy the advantages of digital games, like saving the games when quests run too long. The players will be able to stream their games to fans on Twitch, Mixer, and YouTube.

The Tilt Five glasses will be the lightest on the market, coming in at around 85 grams, Ellsworth said. That makes it easier to wear the glasses during long campaigns. The optics have a 110-degree field of view, and players will be able to look at their game characters up close. And with stereo speakers and a microphone, players will be able to converse with friends remotely.

Tilt Five will ship with a variety of free single to multiplayer action and party games, and the company has already lined up content from third party developers, including Fantasy Grounds, the most supported virtual tabletop with official licenses for an extensive variety of role-playing games.

Ellsworth hopes that it will be a better time to launch the technology, since virtual reality hasn’t paid off like everyone expected.

“Devices like the Oculus Go are pretty darn cool, like when you want to jump around the room and play Beat Saber. I think we’re positioned differently,” she said. “This is something where you can have your whole family around you, playing it for hours. There’s a certain type of person that will like VR. I think we cover a bigger market.” 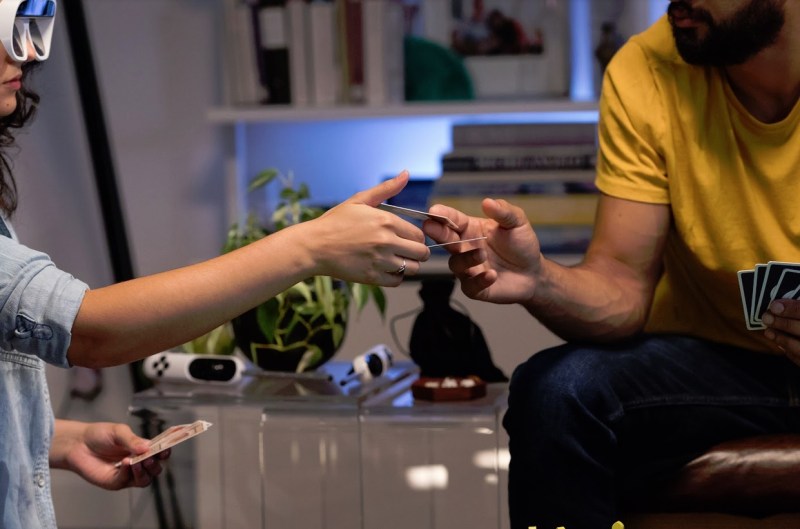 Above: Tilt Five’s working to make card and tabletop games work with an AR tabletop.

Tilt Five glasses are for tabletop mixed reality. The glasses have two HD micro-projectors that project out to a special retro-reflective game board creating a volumetric, holographic display.

Wearers can still see the physical world around them, allowing for truly shared experiences. Due to the nature of the retro-reflective material, each wearer has their own unique, and private, view. Multiple wearers can be around the same game board at the same time, with each wearer having their own perspective.

There are two tracking cameras in the glasses, one for head tracking and one for tracking tangible objects, such as playing cards, tokens, figurines and even hands. The tangible tracking camera will be accessible to developers who wish to use their own tracking algorithms to create mixed reality experiences for their games.

The glasses will have latency under 6 milliseconds, providing for stable images. Due to the nature of projected AR, with the utilization of the retro-reflective material, the glasses don’t suffer from screen-door effect or fixed focus issues. Focus is correct over all distances, from within centimeters to a few meters away from the game board, providing a real sense of presence, and allowing for comfortable tabletop experiences and hours of play.

The glasses will come with a variety of nose pieces to accommodate different nose shapes and to allow the Tilt Five glasses to be worn over prescription glasses. A 6DoF wand and retro-reflective game board come with the glasses, rounding out the Tilt Five system. Other game controllers can be used with the system as well.

The glasses can connect to a mobile device, tablet, or PC via USB 3.0. Windows 10, Linux, and select Android devices will be supported at launch. Additional platforms will be added shortly after launch. The Tilt Five SDK exposes C APIs for native code on all supported host platforms. As well, plug-ins will be provided to developers using Unity 5.5+ or Unreal Engine 4. 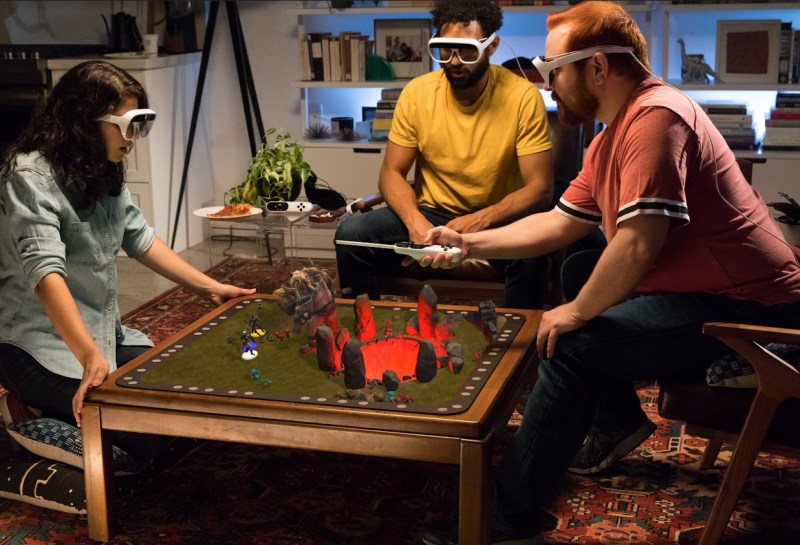 Above: Watch out for that ogre!

Ellsworth showed me a working system that had very good 3D graphics. I was able to view some demos like a Marble Madness-like game where you could tilt a playing field and roll marbles across it. And I played around with a wand, which I could use to grab little cubes and spawn new ones. Everything worked fine.

I didn’t see anything as you can see in some of these pictures, but the images were sharp.

I could see my hands and the world around me while I looked through the glasses.

“We like to say we are compatible with pizza, as you can see your hands with our headset on,” Ellsworth said. 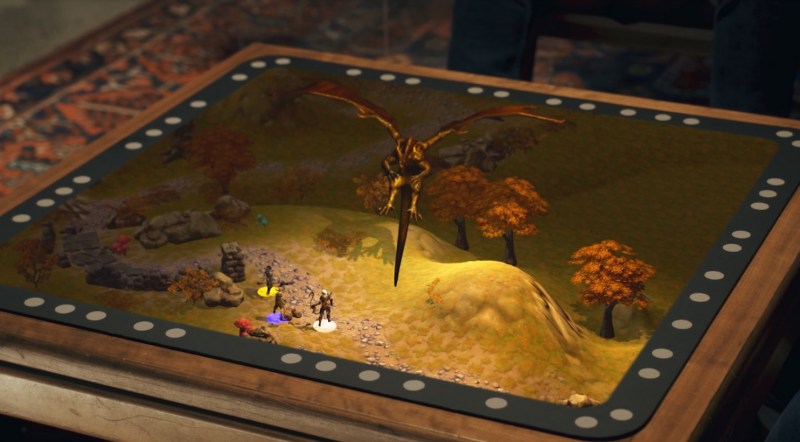 Ellsworth has raised a little money but she is not planning to go the same route with venture capitalists, as she did before. The company plans to ship beta glasses to its crowdfunding supporters in February and then final glasses in the second quarter of 2020.

The new hardware is based on CastAR’s technology, but Ellsworth has been better putting cheaper and faster components into the system. The glasses can now plug into standard Android smartphones via USB wires.

“I changed a bunch of stuff,” Ellsworth said. “So the projectors are higher quality. You can see the edges really well. We’re able to reduce the cost down a lot.”

“The big difference between here and CastAR is that they made us go super wide,” Ellsworth said. “Then we lost our identity. We’re really focused on tabletop entertainment today.”