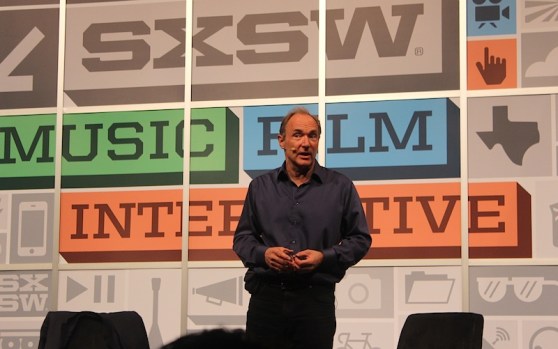 AUSTIN, Texas — There’s a direct line of descent from the NeXT machine, which is what Tim Berners-Lee used to create the World Wide Web, to the iPhone.

That was the beginning of a rapid-fire, enthusiastic, often technical talk about the history of the Web and the virtues of the open Web as a platform, here at South by Southwest Interactive, an annual conference/festival of geekdom.

His talk, “Open Web Platform — Hopes and Fears,” played to a large crowd, although the conference hall it was held in was only half full. (It wasn’t clear if the bleacher seating at the back was closed off or not, but only a handful of people sat there.)

Berners-Lee took the stage after an introduction by John Perry Barlow, who told about his first encounter with the Web in its earliest days, when it was still just emerging from CERN. Then, TBL — as he’s often called — talked extempore for the next 50 minutes without stopping.

The Web was open by design from the very beginning, Berners-Lee said.

“HTML, HTTP, and URLs: The idea was, they had to be universal,” he said. There were no restrictions on the programming languages people could use to generate Web pages, as long as they were compatible with the basic standards. And those standards were made to be familiar to people using already-existing standards. For instance, he put tags inside angle brackets so it would look familiar to SGML people. HTTP headers are similar to other communications protocols. URLs were made to be compatible with domain name system.

Berners-Lee made the system declarative (like CSS), not procedural (like JavaScript), following what he called his “principle of least power.”

“If it’s a Turing complete system, you can’t limit it,” he said — and that can lead to security problems.

Berners-Lee spent the bulk of his time talking about the value of HTML5 and the Open Web Platform, and encouraging people to develop mobile web apps rather than native apps.

“It’s got all the power of HTML5, like easily-inserted video, and in the future, easily-inserted conferences. … And it’s got the APIs,” for accessing hardware and other capabilities on the device, such as a smartphone’s accelerometer, camera, local storage.

“HTML5 is everywhere,” Berners-Lee said. It’s even being used in signs, like you might see on an electronic highway billboard or kiosks in airports.

“I wonder whether people will still continue to print stuff like this,” he said, indicating the backdrop behind the stage, “or whether the conference hall will just be pixels.”

One of the reasons the Web was successful, he said, is because it followed the basic openness of the Internet protocols that preceded it.

“When they developed TCP and IP, they did a wonderful thing, which is they completely ignored how it would be used,” he said. “They didn’t design it specifically for sending email messages, or for file retrieval.” 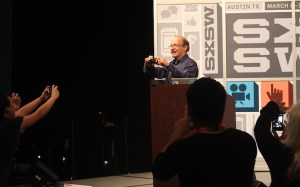 Above: TBL takes his own shots at the crowd.

While he was being fitted with a microphone onstage before his talk began, fans started walking up to take pictures of one of the heroes of the Internet. Shortly, Berners-Lee turned his own camera on the crowd. From the stage, he aimed a small point-and-shoot camera back at the photographers in front of him, snapping pic after pic as they snapped him.

Before long, the crowd of photographers had at least doubled in size. People (including myself) were apparently unable to resist the meta-ness of the moment, photographing the Web’s inventor photographing them.

He was clearly enjoying his fame — and enjoying turning it on its head.

Some other nuggets from TBL’s speech:

Looking back on the Web, Berners-Lee offered some perspective on what the Web means most to him.

“The kittens are great, don’t get me wrong,” he said — but he went on to say how much more he valued the Web’s capability to solve international, global problems.

“Remember, when you do that … keep an eye out, and spend a certain amount of time fighting for net neutrality, and fighting spying and blocking.”