When publisher, tech guru and part-time social entrepreneur Tim O’Reilly prescribes a new business model to heal the shattered global economy and its equally-bruised ecosystem, should tech execs listen up? Only if they want to be in business five years from now.

O’Reilly’s Emerging Technology Conference (ETech) has become an epicenter for many of the memes and movements that are molding the high-tech sector today. Still, it came as a surprise to many of this year’s attendees that the conference focused so heavily on opportunities at the intersection of the country’s economic, social and environmental crises.

O’Reilly’s keynote speech, titled “Work on Stuff that Matters,” set the tone for the event, outlining a bold strategy for identifying and applying creative solutions to the energy and resource shortages the U.S. will soon face — as well as new business models that can use these solutions to jumpstart and even radically transform our flagging economy. 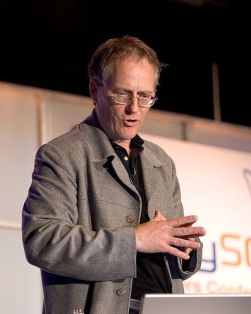 O’Reilly (right) attributes the global financial crisis to what he calls a “reality bubble” that blinded bankers and other executives to the dangers of a growing income inequality and a decline in the competitiveness of Western economies. In short, it was a symptom of an unsustainable cuture. But lessons have now been learned — lessons that await the pioneers building the foundations of a stable and sustainable economy today. His brief talk spanned these issues, as well as ideas distilled from the hacker sensibility that fueled much of the last decade’s innovation.

His talking points provide a clear set of principles that can be used to evaluate any technology or business plan’s viability in these troubled times. In true O’Reilly fashion, here’s his prescription for a new economy in a nutshell:

Work on something that matters to you more than money. O’Reilly suggests that while making money is important to the health of any business, it is often mistaken as the sole measure of success. He also questions whether the conception of a business as being more or less permanent is appropriate anymore in today’s rapidly changing landscape. He urged the audience to consider an “unsustainable business model,” quoting famous triathlete Mark Allen, “You do great stuff while you can, and when you can’t do it anymore, stop.”

Create more value than you capture. Citing Bernard Madoff’s $65 billion Ponzi scheme and the fall of the mortgage-backed securities as prime examples of the smash-and-grab philosophy that has infected the U.S. economy for the past decade, O’Reilly asserted that the days of businesses mining the market for value without putting anything back in are over. Instead, companies that focus on delivering as much value to their customers as possible will be the ones that ultimately survive.

Build a simple system and let it evolve. In the new business ecosystem, good products will be the ones that provide platforms for customers, collaborators and even competitors to build upon to suit their own needs and create new products and services. O’Reilly pointed to the original PC platform, the World Wide Web and, interestingly, Twitter as harbingers of this mentality.

Be friendly to those who extend your reach. Truly nimble systems need to be designed to embrace outside innovation. He used Google’s phenomenal success with allowing mash-ups of its mapping services for real estate sites like Zillow as an example. According to O’Reilly, companies that jealously guard their technologies and users from others will be less viable in the long-run, and eventually displaced by those that rely on more open, cooperative strategies.

Be generous in supporting the work of others. Strong relationships with trustworthy, like-minded individuals that allow them to share in the goodwill and traction you’ve built, will be vital to rebuilding this depressed, divided economy. Cultivating a large circle of trust creates a larger base of potential customers and community members for all parties.

So that’s O’Reilly prescription for the economy as it struggles to get back on its feet. The question is — will the tech gurus and money men who formed their habits and ideals during the bubble rise to the challenge to change?