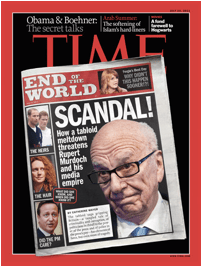 Time magazine is about to make itself somewhat harder to read. It’s adding a pay wall that will keep non-subscribers from reading print editions on the web site for three months after the issue hits the newsstand. On the flip side, it’s making it easier for readers to subscribe to digital and print editions.

This Thursday the weekly magazine will release an “all access” plan, giving readers a chance to purchase bundles of access to the magazine in multiple formats. Time Warner calls this its “magazines everywhere” package. You can get the print edition, apps on your mobile devices, and access to Time.com, in various configurations. We’ve listed the three packages and their prices below.

This is the second Time Inc. title to launch a subscription plan allowing consumers to pay once and access their content across multiple platforms. The first was Sports Illustrated. Other companies are taking a similar pay once, consume anywhere strategy: This week CNN announced its mobile iOS apps and website will support live streaming video from its CNN and HLN networks, for viewers who have already paid for CNN through cable or satellite providers.

Time.com has had a pay wall with varying degrees of blockage on its print content for more than a year, sometimes allowing non-subscribers to read the most recent issue and sometimes not. (According to Time, the print magazine only accounts for about 5 percent of the site’s total content.)

At some point after installing the pay wall, Time.com started letting non-subscribers see the most recent issue for free again. That’s expected to change on Thursday, according to All Things D, when a new pay wall will be activated.

In short, Time, like many other publishers, has been trying out a variety of payment schemes for its online content, in search of a business model that works.

The move to add the pay wall and encourage subscriptions just might work for Time. Under Managing Editor Richard Stengel, Time has adjusted better than many of its competitors as the magazine industry searches for new revenue models.

Time is certainly working to provide rich and original content that will help customers get a bang for their bucks, but will readers spring for the new subscription service? This is one of those situations where only time will tell.