It’s been a rollercoaster journey for London startup YPlan, a company that burst onto the scene back in 2012, went on to secure big VC bucks, and now just sold for a paltry $3 million in an all-stock deal to Time Out.

But how did it all start out?

For the uninitiated, YPlan is a super-slick mobile app that partners with artists and venues to sell tickets for near-future events. It’s all about removing the friction, with a two-tap approach guiding users from browsing to ticket in a matter of seconds. In its early days, YPlan was said to have been installed on 30 percent of all iPhones in London, leading the company to launch globally and garner the attention of some big-name supporters.

Shortly after launch Rytis Vitkauskas and Viktoras Jucikas, the company’s two cofounders, were introduced to renowned comedian, actor, writer, and presenter Stephen Fry, who later tweeted his support of YPlan to his millions of followers, though he never actually invested any money. 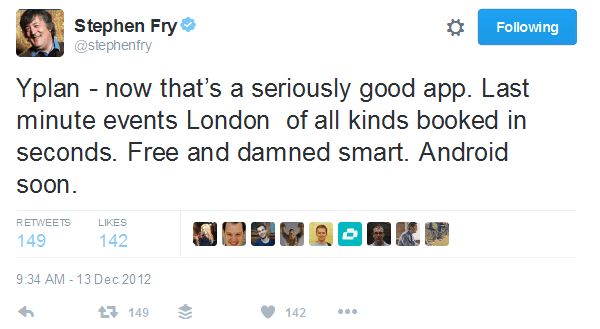 “He’s smarter about 100 things than I am about any single one, and he’s just extremely eloquent, very smart, and passionate about technology,” explained Vitkauskas, in an interview with VentureBeat last year. “When he saw what we were doing, he said he loved it. This was two weeks after we launched. And before you know it, the next day he sent out a tweet.”

Money, markets, and the future

YPlan had already raised a small seed round in July 2012, but the following summer, in June 2013, YPlan closed its first major funding, a $12 million round that saw actor Ashton Kutcher join as an investor. Following an expansion to New York in 2013 and in San Francisco in early 2014, YPlan went on to close a sizable $24 million round of funding, and everything looked to be setting up nicely for the company as it sought to grow globally. As recently as last year, YPlan still harbored aspirations of becoming a billion-dollar company in its own right. But hot on the heels of a swathe of cuts across the startup realm, YPlan revealed it was scything its workforce by 30 percent, with its U.S. operations taking the brunt of the blow.

As of today, YPlan is only operational in London, Dublin, and Bristol, which raises questions over what Time Out has in mind moving forward. Time Out, a publication that’s known for its “things to do” city guides, has built its brand over almost 50 years and has a reach that touches well over 100 million people. The writing is surely on the wall for YPlan as a brand, right?

In an interview with VentureBeat, Time Out CEO Julio Bruno explained that they haven’t entirely decided what to do with YPlan as a brand, but he did confirm that Time Out was chiefly interested in the product’s underlying smarts.

“We love the technology of YPlan and we love the talent at YPlan, and we have been looking at them for a long time,” Bruno explained. “The plan for us is to integrate all their technology, the back office and front office, into our own technology. To be more precise, the way they look at user interface, the simplicity of their app, the ease of using ‘two taps and get a ticket’ rather than the more convoluted white-label solution that we have at Time Out today — that is what is very interesting about them.”

A common problem within many big companies is it can be difficult to properly innovate, which is why startups are often acquired by big companies, or as we’ve increasingly seen in recent years, many firms establish incubators or separate companies where tinkering is encouraged and fledgling ideas are nurtured.

“The way they [YPlan] think as a startup, the speed at which they do things, their algorithms — the plan is to bring all that expertise into the ecommerce area of Time Out,” added Bruno.

So, does this mean that YPlan — as a standalone entity and brand — will be closing down? “Potentially,” said Bruno. “To be perfectly transparent, we don’t know. We’ll get together with the digital team at Time Out and put a plan together. Their app only works in London and Dublin [and Bristol], while ours is worldwide. So it’s not like we can substitute one with the other. That would be impossible. But their technology is going to be used everywhere.”

The long and short of all this is that it makes little sense to keep “YPlan” alive as a brand when it’s operational in just a handful of cities in the U.K. and Ireland. What is most likely to happen is that Time Out will use its technology to supercharge its own events and ticketing operations and leverage its existing mindshare with the 100 million-plus people it already reaches.

As for YPlan’s employees, Bruno confirmed that everyone — including the two founders — will be joining Time Out. “For us, acquisitions is not just about technology, it’s about talent too,” he said.