Online gaming is of more interest to more people than ever. That’s because of casual games — small, low-budget, easy-to-learn entirely online creations that are increasingly becoming a part of online life. 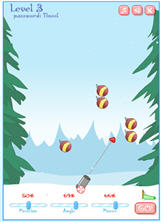 The great thing about casual games is that they’re so casual. They don’t require big time commitments. Most players aren’t geeks. They fit nearly any context, from destination sites like Kongregate, to other places like Facebook, where they capture new audiences.

We spoke to the founders of four young startups who are breaking ground in casual gaming: Andrew Busey of Duels.com, Charles Forman of iminlikewithyou, Raph Koster of Metaplace, and Mark Pincus of Zynga.

The four startups are a diverse mix of the “right now” of gaming, and each has different aims for its games. Here’s a brief description for each:

I’ve organized my conversation with the founders of these games according to themes:

What’s the common thread here? Answer: Be socialWhen I asked Zynga’s Pincus what sort of casual game designs work best right now, he immediately replied that there is no perfect design. “I’d describe it as a free-for-all — you can find old classics like Scrabulous, but even more examples of original games,” he said.

That’s true for basic design, but there’s a different design factor driving casual gaming’s boom: Social interaction. Across the internet on sites like Digg, Facebook and even iminlikewithyou, subtle reward schemes encourage interaction. That’s mirrored in actual games, which are increasingly relying on interaction as their core principle, despite the success of single-player gaming sites like Kongregate.

Iminlikewithyou founder Forman developed a separate on his site, Blockles, an evolution of the popular Tetris, to convince users to have real-time interaction on iminlikewithyou. “It’s not about the site’s content, it’s about your interaction with other people around the content. The focus is on play, and play with others,” he says.

Likewise, Busey created Duels for one-on-one player battles and Pincus says he chose Texas Hold’em as Zynga’s first game because it gave a casino-like social feel, gathering groups of players. “The unifying principle is that we look to put out games that we think are inherently social,” he says.

Of course, on Facebook, playing with your friends is almost a requirement. But even outside social networks, the most successful games are becoming those that can find clever ways to throw players together.

How complicated should a casual game be?
This isn’t an easy question. Every successful casual game must be equally easy, at least in the learning stage. In the first moments on a casual game, fun is linked to simplicity for most players, and they’ll instantly walk away from what’s not fun. “It’s always been the rule of thumb that you have to hook people quickly,” notes Koster, a gaming industry veteran.

With the advent of Facebook, it’s reasonable to ask how much depth and complexity a casual game developer really needs to bake into his game to be successful. Vampires and Zombies, two games on Facebook, would have trouble becoming more shallow. Yet they quickly got hundreds of thousands of users and endless press attention. 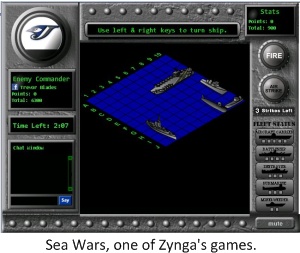 Pincus says the simplicity of games on Facebook is tied to the audience, which consists of people typically following invites from friends. “There’s less depth on Facebook because people care less. If people care enough to go to your website, they care a lot,” he told me. Think of it like bumping into someone of the opposite sex (or whatever your preference) in a grocery store: A pretty face is what gets your attention, not their depth and complexity.

A website is a bit more like a date with a potential life partner; initial attraction is great, but depth is ultimately more important. Complexity is necessary to keep people coming back. Duels relies on a combination of advancement, competition and trading that becomes more intricate over time.

Of course, like many website-based developers, Busey did think of making a Facebook app to draw users. But even a simplified version of Duels hasn’t been a hit there. “There hasn’t been a massive uptake, I think because it’s more complicated than other Facebook games,” he said, also noting that the fantasy theme and general geekiness of Duels tend to turn off Facebookers.

Despite Facebook’s characteristics, we’re likely to see fewer Vampires and Zombies wandering its halls as time goes on. “People are getting sick of the shallow apps,” says Koster. “And if I were developing for Facebook, I’d try to do something richer, because I think Facebook is becoming a lot of people’s homepage.”

OK, so you’ve got players, now where’s the money?
Money is the icing on the cake for developers, of course — but also one of the more elusive parts. It’s easy to slap on some ads and make a few cents, and on the scale of a portal like Yahoo Games, that’ll bring in serious cash. But CPMs (the price paid per a thousand page views) for advertising around games are low, so startups have to be clever to make serious dough.

“I heard these horror stories of 10 cent CPMS, but I figured since people are playing games in a window, you should be able to incentivize them to click away,” says Pincus. That fledgling strategy developed into an in-house ad network for Zynga. When people click on an ad beside the game they’re playing, Zynga whisks them away to another app that has paid for the ad. If the user signs up for, that advertiser pays Zynga a more reasonable amount — 50 cents, say.

The trick is giving players a benefit of some sort for clicking away to another application or website — luckily, that’s fairly easy with games, which often involve points of some sort anyway. However, Zynga’s advertising scheme has also helped it build up its own network of games. Now, says Pincus, “Our business plan is basically the network effect.”

Duels is in a different situation. Ads might annoy its dedicated users, and there’s not a network to promote (yet; Busey is planning two more games). So there’s no advertising to be seen. Instead, players have the option of spending a little money here and there to buy items that may make their duelist more powerful. And some have racked up over $1,000 in purchases. Now ask yourself: Can you imagine someone paying $1,000 up-front for any game, no matter how good? 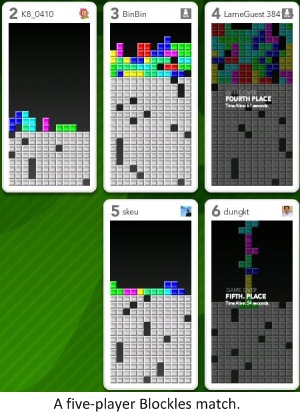 That’s the high potential of micro-transactions, and Busey has been especially clever in instituting them on Duels. His trick is selling items in packages with randomized contents, much like your old Topps playing cards. Big spenders have a much better chance of getting good items, and get more stuff in general. “But buying doesn’t make you the best. At the top, people who are clever win,” says Busey.

Zynga and Duels are both making money directly from their games, but that’s not true for iminlikewithyou. Instead, it’s drawing the same sort of fringe benefit from having a game on the site that Facebook does. Forman says his development of an entirely Flash-based, real-time game have paid off: It has created addicted, returning users (of which I count myself one). “Since releasing Blockles, it’s been amazing. Growth is excellent at this point,” he told us.

Koster, for his part, isn’t saying much specific about Metaplace yet, but an offhand comment he made probably says a lot about his long-term ambitions: “You really clean up when it’s on Xbox Live or Nintendo DS,” he said.

Conclusion
I’ve only managed to scratch the surface. Casual gaming is growing, bigtime. As I reported in October, the industry recently hit $2.25 billion in yearly revenues, and it’s expanding 20 percent every year, according to the Casual Gaming Association.

A lot of that is from the portals, some of which are still growing — King.com, for example, reports that its games were played 190 million times in January, more than double the same time last year.

Still more growth will be enjoyed by the small startups, whether on Facebook or their own sites — which are sucking in growing numbers of players. My guess? Future revenues for the industry may beat expectations. We’re only at the beginning of trying to monetize these sites, and observations of interaction and behavior — tied with ways to let advertisers target these passionate users — will pay off for developers.

Want to talk about your own gaming startup? Contact me.