TimeBridge, a startup that helps coordinate business meetings, announced it has raised $5 million in a second round of funding.

The company’s key idea is that it doesn’t want to replace the calendar you already use; instead it wants to connect your calendar with everyone else’s schedule, regardless of what software they’re using. TimeBridge integrates with products like Google Calendar, Microsoft Outlook, and Apple iCal. That should mean more schedule sharing and automatic calendar updates, with less time manually fiddling with your calendar and fewer meetings that slip through the cracks. On the other hand, the San Francisco company may also be vulnerable as calendars, themselves, make it increasingly easier to share schedules and as competitors like Tungle try to achieve similar goals.

One way TimeBridge is trying to combat that threat is by building more collaboration services around its flagship scheduling tool, which launched in December 2007. Since the beginning of the year, TimeBridge has added cheap web meetings and group scheduling. Not only do those features make the service more useful, they also create more ways for the company to make money.

TimeBridge says it has seen rapid growth over the past year, from 30,000 users to more than 300,000. The new funding comes from Mayfield Fund and Norwest Venture Partners, who also provided the company’s $6 million first round. 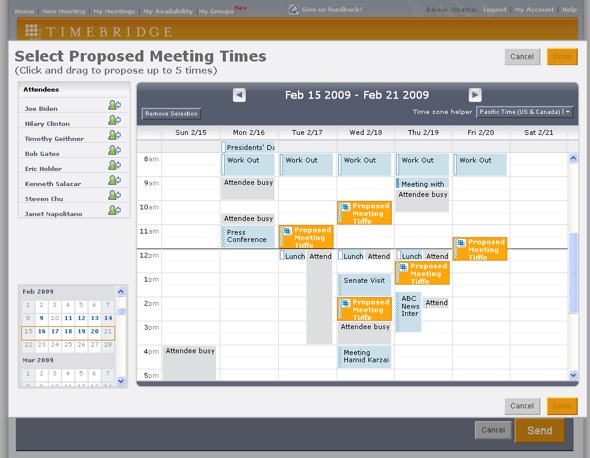