TinyCo and 20th Century Fox are announcing today that Family Guy is going to become a mobile game. That should make the millions of fans who watch the Fox television show happy as mobile is becoming a big platform for favorite mainstream brands.

The success of the mobile game hit The Simpsons: Tapped Out, created by Electronic Arts for Fox Digital Entertainment (part of the Rupert Murdoch News Corp. empire), showed that there’s a big market for funny games. And that’s what TinyCo is shooting for as it builds the free-to-play game and collaborates with Fuzzy Door, the writers of the Family Guy cartoon. 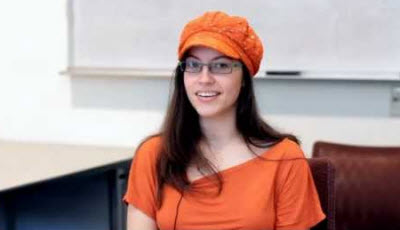 Above: Chelsea Howe of TinyCo

Now Fox Digital Entertainment (part of Twentieth Century Fox) has tapped San Francisco-based TinyCo to build a Family Guy game for launch in early 2014. The show has been a hit for more than a decade, so Fox has entrusted TinyCo with a big responsibility. For TinyCo, this is a chance to put a well-known brand on a game and help it stand out from the sea of competitors in the app stores. But both companies insist it won’t just be a throwaway experience.

“The reason why people love Family Guy is because it’s funny,” said Chelsea Howe, the senior game designer at TinyCo, in an interview with GamesBeat. “All of the mechanics works to serve that idea. Our design goal has been a ‘laugh every session.’ That was an inspirational goal for the design team, and as we play-test it, it is becoming the reality.”

Fox has had good luck in the mobile game business so far by playing the field with gamemakers. It has been launching products in the iPhone market since 2009. It worked with Smule to do a karaoke mobile game based on the TV show Glee. It worked with Rovio to create the Angry Birds Rio game, which had a tie-in with the Fox movie Rio. It did the Simpsons game and the Ice Age Village game with Gameloft.

“We’ve been smart or lucky to pick some really interesting partners along the way,” said Matt McMahon, the vice president of mobile at Fox Digital Entertainment. “We’re very focused in making something intrinsically made for the platform and can hopefully have a nice run on it. It’s not just a repurposed marketing thing or repurposed web experience. People can have our brands and an extension of their worlds in their pockets every single day.”

He noted that TinyCo had “great monetization chops but a vision beyond that” that fit well with the Family Guy brand. Howe said the team made the game more character-driven than a typical TinyCo game. TinyCo’s games have been downloaded more than 85 million times.

“We want to have an experience that is authentic to the brand,” McMahon said. “TinyCo approached us. They competed with 12 or 15 others and made it through the process. We like to keep our finger on big indies that are on the rise in mobile games.”

Andrew Green, the head of business development and business operations at TinyCo, said his company’s team jumped at the chance to work with writers of the show to build the game. Howe said the team is more than twice the size of the usual staff that TinyCo uses for a game, with lots of animators creating a lot of animated content to deliver the game’s humor.

“We flew some of our design team to the Fuzzy Door studio and spent a day a week teaching the writers game design,” said Howe. “That collaboration helped us pull off our ‘laugh every session’ goal.”

“We have comedy writers on staff, and they’re supplementing the work with the writers at Fuzzy Door,” McMahon said.

McMahon said the team is focused on building a strong original story, making the content into a kind of role-playing game for the player inside the world of Quahog. Each side quest is like an episode of the Family Guy TV show. The goal is to make content that lasts for a long time, or several years — far more than a typical mobile game.

Howe said that the developers are shooting for two solid months of content at the very beginning, but the title will be updated continuously. It will debut on both iOS and Android.

“If Miley Cyrus does something crazy this week, we can make fun of that in the game a day later,” McMahon said. “We’ll do content updates every four to five weeks. We’ll do more than seasonal content packs for Thanksgiving or Christmas. We’re excited about the ongoing operations for the game.”

Family Guy star Peter Griffin, said, “It’s really fun. Plus, if you play it for more than three hours, it counts as going outside!”