Two New York startups are vying for the title of top ticket aggregator. SeatGeek is better known, but TiqIQ announced a $1.7 million series A Thursday, giving it almost as much funding as its high-profile rival.

Both companies crunch mountains of data to forecast the price of tickets, helping fans decide on the best time to buy. Both work with publishers to power ticket sales on their sites. Up until now, only SeatGeek had a consumer facing site, which is why it was better known. But TiqIQ has now launched a destination site of its own.

“We were a white label platform for publishers, only nominally competing with consumer facing sites like SeatGeek,” founder Jesse Lawrence told VentureBeat. “But we had all the data, so it made sense to put in the extra effort and go after the consumer market.” 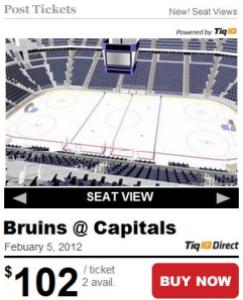 Lawrence and his co-founders are survivors of the dot.com bust. “We ran into 2000,” is how he put it.  After his time as an entrepreneur, he did a stint as a venture capitalist and then worked at the Programming Group for IAC, helping to start or acquire businesses like College Humor, Vimeo, and The Daily Beast. Lawrence runs TiqIQ’s New York office while his co-founders handle the development in Israel.

For a simple idea of how TiqIQ works, you can check out the widget they have embedded on the Washington Post Sport’s page showing the best deal on tonight’s Capitol’s game. The company also pushes tickets through social channels like the WashingtonPost’s Facebook page.

One of the things TiqIQ hopes will differentiate it is offering three options for buying tickets: Fixed Price, Auction, and Make an Offer. “We allow consumers to interact directly with the sellers by making the offer they think is fair,” Lawrence said. The goal is to give fans insight into the market they might not otherwise find. “The SuperBowl is a great example because the highest price tickets are going down in price and the cheapest seats are going up. We expose that information for our users, then let them decide how best to buy.”