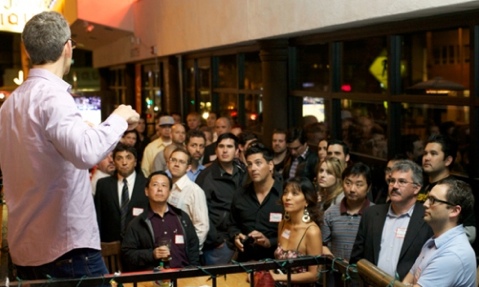 The LA tech scene is hot, and so we hit the town looking for great startups to write about, and to invite to our DEMO conference.

The list of Los Angeles companies making waves is growing: HauteLook sold for $270M to Nordstrom, Riot Games recently sold a $400M majority stake to China-based Tencent, Shoedazzle raised $40M from Andreesen last year, Demand Media went public, and Beachmint just closed another $35M round 2 weeks ago. These, mixed with the LA tech scene’s pre-existing strength in interactive media, has made LA one of the most start-up markets in the U.S. Incubators and accelerators are springing up. Groups like Science are forging startup teams and pumping them out at a quick rate.

Our trip to Santa Monica was part of the DEMO Innovation tour, where we’re traveling in search of the most disruptive products to showcase at DEMO, which is coming up April 17-19. (In fact, we extended the deadline for companies to apply; it’s now March 1.)

Our own Matt Marshall, along with Peter Pham from Science, hosted a feedback session with ten local companies. Later in the evening, over 100 members of the Southern California tech community came together for a lively evening of cocktails, live pitches, and casual networking. Entrepreneurs got up and shouted out their messages, bringing a few curious passersby on the street to join in the audience. Check out the pictures from the meetup below:

Thanks to @timreha and New Media Synergy for the photography.