Today is Martin Luther King Jr. Day, celebrating the inspirational leader who died fighting to bring racial equality to the United States. Since 2015, Apple has commemorated this holiday by replacing its homepage with an MLK photo and quote or reflection. This year’s quote — “the time is always right to do what is right” — is especially noteworthy, as Apple CEO Tim Cook evoked the same phrase in November 2013 when discussing Apple’s social responsibilities as a business.

On this day, it’s tempting to focus on Apple’s broad issues with race. Despite appointing a vice president of diversity and inclusion to improve representation in its executive and non-executive ranks, Apple’s employee diversity hasn’t been improving much, and the company lost both its diversity czar and one of its most prominent black executives last year. But Apple has a much bigger issue: the huge number of Chinese manufacturing employees it has kept at poverty-level wages, despite repeated calls from human rights groups and journalists for change.

Dr. King is best known for focusing on changing laws, but he was also concerned with the impact of economic injustice on human rights. At the March on Washington in 1963, King’s historic “I Have A Dream” speech began by noting that African Americans — despite having been legally emancipated 100 years earlier — were still not actually free, as they lived on “a lonely island of poverty in the midst of a vast ocean of material prosperity.” One goal of the March was to establish a $2 minimum wage for all workers; the minimum wage had previously been created to combat exploitive sweatshops that paid laborers less than would cover the basic necessities of life.

Nearly 55 years later, Apple is one of the largest exploiters of underpaid laborers in the world. In the name of generating the biggest annual profit in corporate history and incredible (over 38 percent) margins, Apple’s manufacturing relies substantially on poorly paid Chinese workers — except for sales in countries such as India and Brazil, which require some domestic assembly to avoid punitive taxation. This is the reason virtually all of Apple’s products are badged “Designed in California, Assembled in China.” Apple, the Chinese government, and key manufacturers Foxconn and Pegatron have cooperated to make this work on a hitherto unimaginable scale.

Consequently, city-sized Chinese factories now exist largely to make Apple products, such that nearly every iPhone and iPad is produced under conditions that have been called slavelike. Over 50 years after King’s call for a $2 American hourly minimum wage — equivalent to $15.88 today — China Labor Watch in 2016 reported a $1.60 average hourly wage for Chinese Apple manufacturing workers after deductions. They also face excessive overtime, overcrowded dormitory-like housing conditions, and other major concerns with compensation. 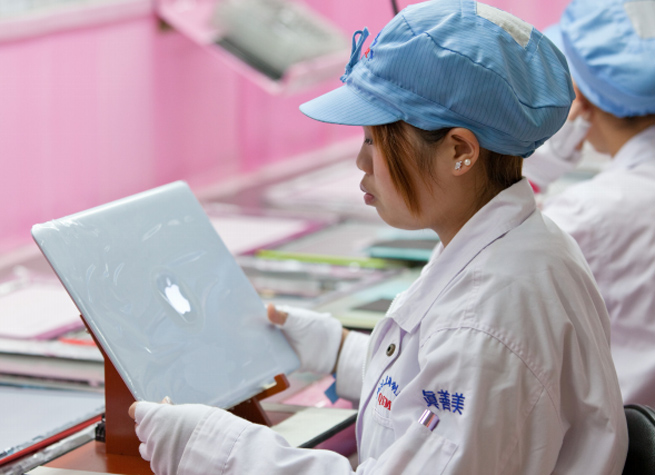 More than battery gripes, processor concerns, and various innovation challenges, human rights issues are the key problems that make some people — even devoted fans — uneasy about Apple’s products. It is no exaggeration to say that Chinese workers today live on Dr. King’s “lonely island of poverty,” as they cannot afford to own the products they make.

Despite its public-facing stance on human rights, Apple is all but unaccountable for these problems. When confronted, it treats the issues as its suppliers’ responsibilities, and typically raises three “yes, but everyone can do better” defenses: Most companies manufacture in this exploitative way, Apple gets criticized more than any other company, and yet it also does more to improve than any other company. Apple produces supplier responsibility reports that tend to show annual improvements but are often questioned by human rights organizations. A sample statistic: 98 percent of Apple’s suppliers abide by a 60-hour maximum work week. At $1.60 per hour, assuming a whole year of long 60-hour weeks, that’s an annual salary of just under $5,000.

Meanwhile, unemployment remains high across Europe, as well as in Africa and parts of the United States. This isn’t to say that Apple must open manufacturing plants in these places, but that an insanely profitable company espousing social responsibility could easily give more back to the communities that consume its products, or to radically improve working conditions and wages around the world.

Some might question whether a corporation has any responsibility to be socially beneficial. Generally, the answer is no: The company is formed, perhaps explicitly, for the purpose of making a profit. However, if the corporation explicitly takes on a social mission or claims that it’s working towards a social good, the answer is a clear yes.

This particular company currently ends every press release by stating that its over 100,000 employees are dedicated to “leaving the world better than we found it.” Even when Apple was selling 1/4 as many devices as it does today, its internal and external messaging suggested that the company’s mission was to make a huge positive dent in the world.

Recently, Asymco pointed out that Apple likely sold 100 million iOS devices in the past three months, and that its App Store business is almost as large as the entire global movie industry. Apple makes an incredible amount of profit, which has recently been used for mammoth payouts to executives and shareholders, opulent construction and R&D projects, and amassing a gigantic cash pile. These profits don’t generally go to workers in the form of commissions, bonuses, or high wages. To the contrary, even Apple workers outside of China have historically complained of low compensation and long hours, both of which Apple executives have justified by citing the prestige of being Apple employees. All of Apple’s employees, regardless of where they live, deserve to be paid fair wages.

As we reflect on Martin Luther King, Jr.’s legacy, and ask what the “right thing” is for Apple to do, it’s impossible to look away from the imbalance of poverty visited upon the company’s laborers versus the riches enjoyed by its executives and shareholders. Rather than exploiting manufacturing cities full of Chinese workers, the time is right for Apple to address one of the central questions of its legacy under Tim Cook: whether the wealth being generated by its famous products is coming at the cost of many of its anonymous workers’ lives. Now is the time for Apple, in MLK’s words, to cash a check on behalf of its people — “a check that will give us upon demand the riches of freedom and the security of justice.”