Smart toilets have been building up to an explosion in the past few years, and now they’re overflowing. At CES 2020, we saw a number of companies that have taken the plunge with new technology for the porcelain thrones of the future.

They’re all about automating tasks such as flushing toilets, cleaning them, and lowering environmental costs. I’m not sure this meets the definition of disruptive innovation, which is our charter at VentureBeat. But it sure fits the definition of technology that makes me laugh, which is really what I like to cover.

I do think that there have been some important breakthroughs with toilets that are not all evenly distributed throughout the world yet. Most of these have been created in Japan, where bidets and butt dryers mean that they don’t need to kill trees for toilet paper. And if you haven’t seen the Netflix documentary on Bill Gates yet, you’ll be happy to learn that the smartest man in the world is working on a sustainable toilet for the developing world as a key to fighting disease and reducing pollution. 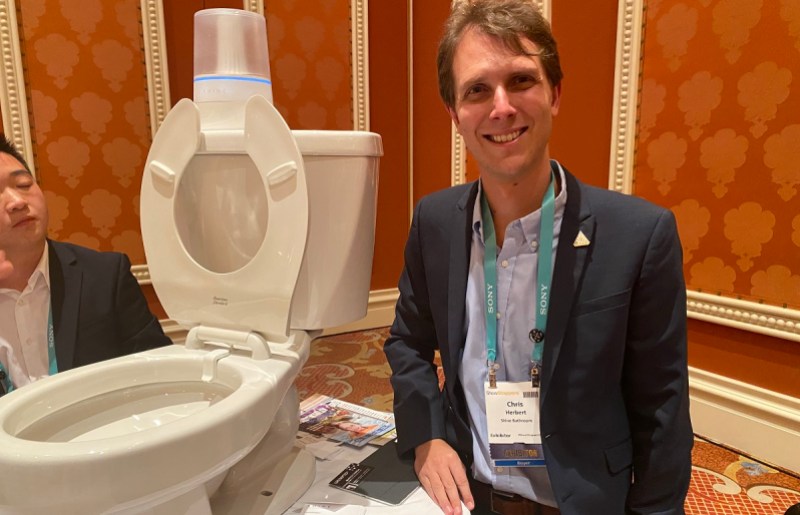 Chris Herbert, CEO of Shine Bathroom, has a gadget that produces electrolyzed water. It takes tap water, adds a salt pod to it, and then zaps the water with an electrical current. The mixture rips the apart the salt and water molecules and recombines them with sodium hydroxide and hypochlorous acid. When a flush happens, it sends a mist of the mixture into the bowl to disinfect and deodorize it. It is as effective as Formula 409 and Lysol, but it doesn’t use any harmful chemicals. Salt water is what gets flushed down the bowl.

The mixture has been around for a while, and it’s the same chemical-free cleaner that has been used for decades to clean sushi. Shine also detects whether you’ve got a leak in your bathroom pipes and sends an alert if it finds one. 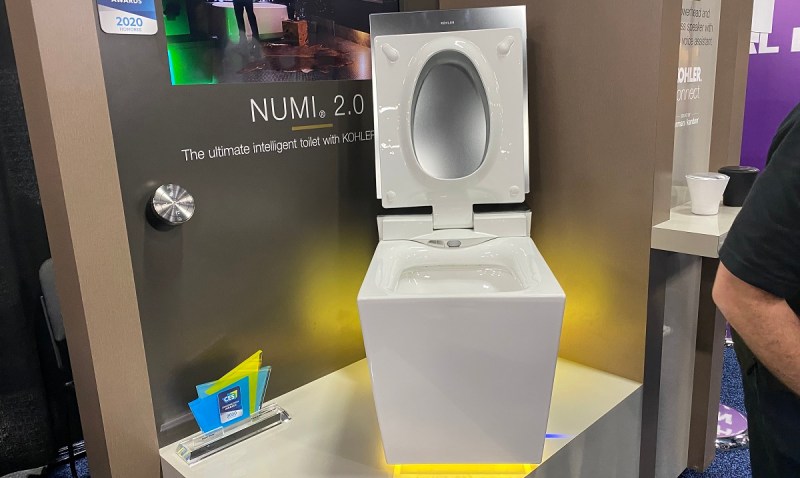 Kohler showed a toilet that has a heated seat, a bidet to clean your bottom, and built-in Bluetooth speakers. It also has ambient color lights and an Amazon Alexa integration, so you can talk with your toilet. 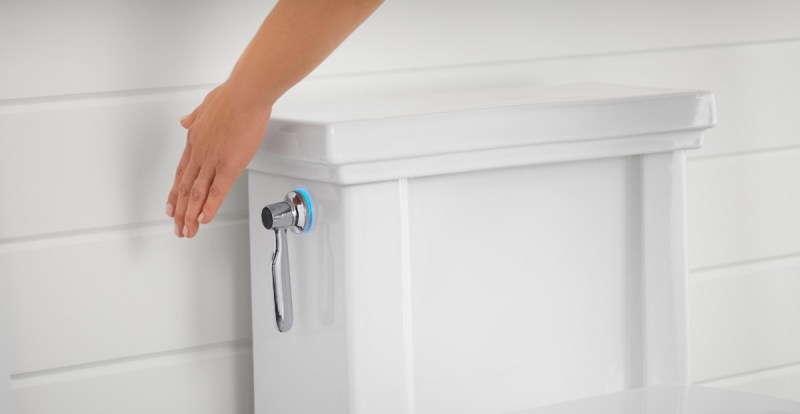 The new Touchless Toilet from Kohler offers touchless flushing through a sensor in the flush lever of the toilet. By hovering your hand in front of the lever, you can flush without spreading bacteria. The flush lever also features a nightlight, which you can adjust through the Kohler app. It’s bringing a tech that is common in commercial bathrooms into the home. 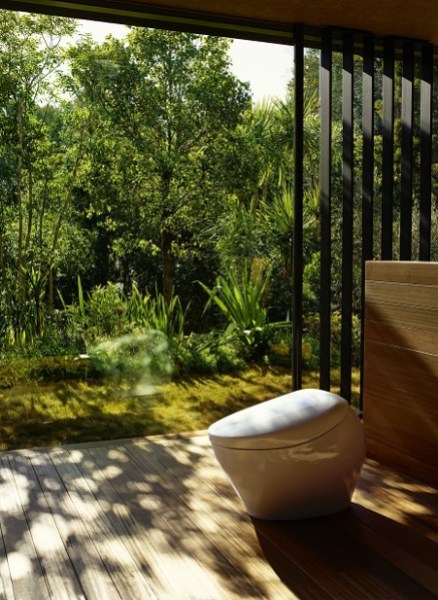 Above: Toto’s Neorest NX is a smart toilet.

Japan’s Toto is the world’s largest toilet maker, with $5.2 billion in annual sales. At CES, it showed off technologies such as Premist, which sprays a bowl with a fine mist of water to reduce the likelihood some — uh, matter — will stick to its surface. It also showed Cefiontect, a nanotech glaze that seals the porcelain throne with an ionized barrier, creating a slippery surface that repels matter, mold, and mildew.

Toto also showed its Tornado Flush System, a rimless bowl that uses only 1.28 gallons per flush. And it showed Ewater, a mist that keeps the bowl, washlet, and Neorest wands clean. Toto already has a wide variety of seat-warming, self-cleaning, and bidet-equipped toilets. You can’t beat the Japanese for toilets.

The Neorest NX2 Intelligent toilet costs $12,800. It has a self-cleaning tank that combines ultraviolet light and a titanium dioxide bowl to get rid of microscopic waste. It also has its own deodorizer.

Charmin had the cheekiest products at CES. P&G’s toilet paper brand rolled into CES 2020 with its RollBot, a robot that fetches a roll of Charmin while you’re on the loo, and SmellSense, which warns you if there are bad smells in the bathroom. And I got to try out the V.I.Pee porta-potty with virtual reality entertainment.

I sat in the premium porta-potty experience enhanced with an Oculus Rift S VR headset. It transported me into the front row of a concert event, so that I wouldn’t “miss a beat while on the seat.” There wasn’t much to see, but if it’s as good as advertised, then I might just sit in that seat all day long.