Two more major video game shows — the Tokyo Game Show and Paris Games Week — have been canceled thanks to the pandemic, but the giant Shanghai expo ChinaJoy will take place as planned for July 31 to August 3.

The end of the physical conferences mirrors the cancellation or digitization of events such as the Game Developers Conference (now online-only in August, the Electronic Entertainment Expo (canceled), and Gamescom (now online-only) because of the coronavirus. We also moved our GamesBeat Summit event to a digital format in late April.

Most of the world is adapting to the no-travel policies by staging a scattering of one-off online events, such as Geoff Keighey’s Summer Games Fest, which held its first installment this morning with the reveal of Activision’s Tony Hawk Pro Skater 1 and 2 remake. And the European Games BizDev Gathering takes place this week to ensure deal flow for developers, publishers, and investors.

Shanghai newspaper Shine said that ChinaJoy will go on, with special measures in place. Those include requirements for a real name and green health QR code. The show staff will also take the temperature of attendees throughout the show.

That sounds like a massive change to the show, which drew 364,000 people last year to the giant Shanghai expo center, but it also sounds like something that the Chinese government can pull off. The exhibits will have staggered positions to provide for more distance between attendees, but the shows I attended in the past had very little room for social distancing at the big booth shows.

China claims that its strict lockdown has eliminated the coronavirus, and it lifted severe measures in early April. But normally a lot of foreigners travel to the event, so it does represent some risk of reinfection. China’s government has also said it will test all 11 million residents of Wuhan after new coronavirus cases emerged. 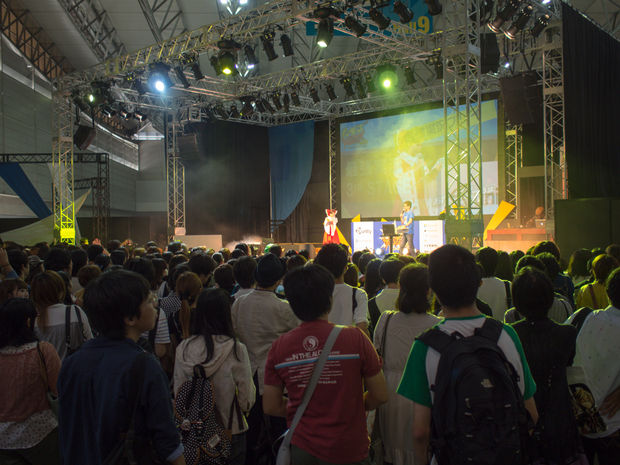 Above: An indie games stage event at the 2014 Tokyo Game Show.

Scheduled to take place from September 24 to  September 27, the Tokyo Game Show has also been canceled. The organizers, CESA, Nikkei, and Dentsu announced at the same time that they will hold an online version of the event.

The organizers of the event at Japan’s Makuhari Messe said they prioritized the health and safety of visitors, exhibitors, and stakeholders. The Tokyo Game Show regularly draws more than 250,000 attendees.

Above: Paris Games Week has been a big venue for PlayStation events.

The show was due to take place from October 23 to October 27. But the technical and complexities of doing the event this year led the organizers to cancel it and say they are preparing next year’s event. Sony typically holds a large event at that show.