The global mapping and navigation giant has partnered with U.K. startup What3words for the initiative, which will integrate the latter’s platform with TomTom’s consumer and business products later this year.

By way of a quick recap, What3words divides the entire planet into 57 trillion 3 meter x 3 meter squares and assigns each square a random three-word address. For example, if you want to find your way to a specific place in the Gobi desert, What3words may tell you that its address is “departed.rumbled.awaiting.” Move a few meters to the left, and the three-word address will change. 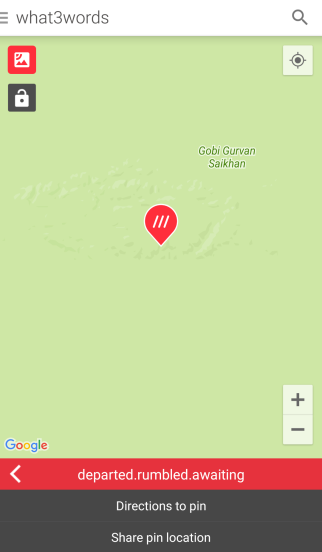 While many tourist attractions and residential/business addresses can be found through a simple keyword search in Google Maps, there are plenty of places whose location can’t be accurately described without resorting to complex GPS coordinates.

With What3words, you can convey the location of a tent in a field, a hut in the desert, a rotting shipwreck, or a house in a sprawling village — even if they don’t have a reliable addressing system. Travel guides, event organizers, service providers, and anyone who needs to convey a hard-to-find location can do so with three simple words.

Though What3words has its own consumer-facing mobile and web apps, it has increasingly licensed its technology to businesses, such as Mongolia’s national postal delivery service; logistics giant Aramex, which adopted What3words for its ecommerce fulfillment operations globally after investing in the startup; and Daimler-owned Mercedes-Benz, which recently became the first automotive firm to integrate What3words into the very fabric of its vehicles, replete with voice commands.

TomTom represents a major step forward in What3words’ mission to become a global addressing system powerhouse. Founded in 1991, Netherlands-based TomTom is best known for its GPS-powered services and devices, including satellite navigation units for cars, and it’s also one of the major global online mapping platforms, alongside Google Maps, Here, and OpenStreetMap.

In short, TomTom could help the What3words system scale globally.

“Whether you’re trying to find an address in the center of Turin or on the streets of Tuvalu, TomTom wants to get you there quickly and efficiently,” said TomTom Automotive managing director Antoine Saucier. “Our collaboration with What3words demonstrates our commitment to embracing new addressing technology that is easy to use and integrates simply into our navigation offering.”

The principle is similar to something like Mapcode, which was actually developed by TomTom’s founders in 2001 as a way to describe locations using just a handful of letters and numbers — in fact, TomTom still supports Mapcodes to this day. Google has also developed a similar Open Location Code system.

But by using easy-to-remember words in its addresses, What3words hopes to gain global traction, and partnerships with major companies such as TomTom could go a long way toward helping it do just that.