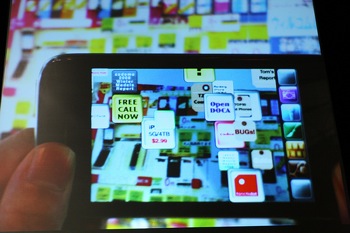 Finally, a decent fundraising round size for an augmented reality startup.

Tonchidot, the Japanese startup behind the augmented reality browser Sekai Camera, raised $4 million from DCM and existing investor ITOCHU Technology Ventures. Augmented reality is a young field that lets you superimpose data and graphics over the real world in a camera viewfinder.

Two things are interesting about this round — Tonchidot becomes the second of several augmented reality startups to raise a venture-backed round this year. It’s a decent size for a first round and four times what Dutch competitor Layar raised this fall. Although a number of startups have launched products this year on the iPhone and Android-based phones, few venture capital firms had gotten their feet wet in the space. That seems to be changing now.

The second thing to note is that Tonchidot sounds like it will take a very different route to monetization than all of its competitors. It will use its augmented reality browser for more game play. Other competitors like Layar and Wikitude will take the advertising route, letting businesses pay for augmented reality tags or ads or sponsor layers in the browser that point to nearby places like fast-food locations or coffee shops.

Like many other mobile technologies, augmented reality will probably evolve very differently in Japan. Users can tag locations with data and comments in the browser that other people can pick up later if they use Sekai Camera in the same place. Ken Inoue, Tonchidot’s CFO, suggests that there might be special virtual goods that users can leave in different places for a fee.

“We think augmented reality provides a really interesting user interface, and a place to combine social interaction, marketing and content creation,” said Osuke Honda, a principal at DCM. Specifically, Honda says Tonchidot’s technology could be used to stage game play in the real world. For example, you could have robots battle each other through your phone on a real physical location like a playing field. Or it could be used in cosplay, a type of performance art popular in China and Japan where people wear elaborate costumes. 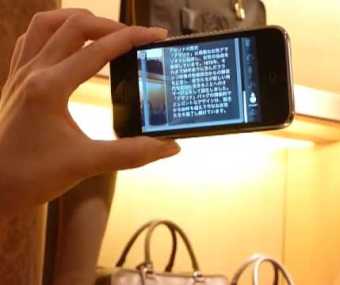