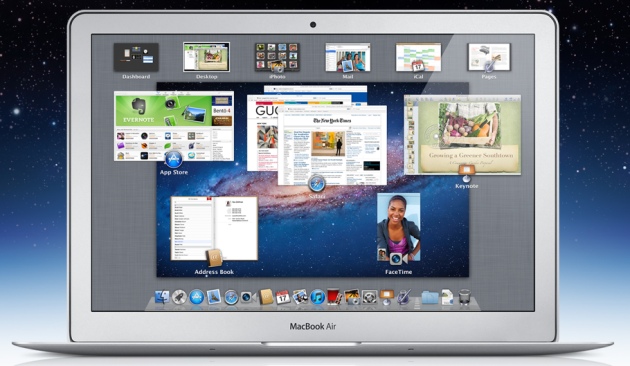 Chief financial officer Peter Oppenheimer let slip that the new OS was on the way during yesterday’s Q3 earnings call, and Apple fans are pumped.

Apple announced OS X Lion back in early June at WWDC. The OS adds more than 250 new features at the surprisingly low price point of $29.

The 4GB Lion upgrade can only be downloaded through the Mac App Store, unlike previous OS releases that could be purchased on disk. So those with slow or metered Internet connections may be out of luck on getting their upgrade now. Apple, poorly attempting to avert complaints, said people could download Lion using a Wi-Fi connection at the Apple Store.

If you have the bandwidth to download the new OS, we’d recommend it because the price-to-new-feature ratio is unbeatable. Here are the top 10 reasons you should download Lion today.

1. Price — One of the most jaw-dropping things about the announcement of Lion is its pricing. Lion adds a lot of great new features and only costs $29, a sign that Apple adamantly wants you to upgrade. And really, what’s $29 when you already paid a premium for your Mac?

2. Full Screen Apps — Lion has built-in support for full-screen applications. Instead of always requiring the control bar, developers can now make a bigger impact with a full screen. This new feature comes in handy especially with things like multimedia organization and editing.

3. Multi-Touch Gestures — With the introduction of multi-touch gestures, users will now be able to use more than one finger to easily launch various actions. Some of the more common gesture responses include rubber-band scrolling, page and image zoom, and full-screen swiping. This function can be used on all Mac laptop trackpads as well as Apple’s Magic Trackpad.

4. Improved Mail App — Any improvement to the mail app is welcome, and Lion promises to refine the mail experience even further. The revamped application now includes full screen coverage, a message list with snippits, and e-mail threading (finally!).

5. Mission Control — This is a handy new function that lets you see everything running on your Mac from a bird’s-eye view. It shows all running apps, windows, virtual desktops, and the dashboard in one spot.

6. Launchpad — With inspiration from iOS, the Launchpad is where you’ll find icons of all applications on the machine, and each app opens with a single click. It’s sort of like looking at your iPhone or iPad home screen except on a Mac.

7. Resume — Now this is cool. If you restart your Mac at any time, all of your open applications and windows can pop back up just as you left them before the OS booted back up.

8. Auto Save / Versions — Auto Save makes your Mac backup your work as you make changes, as long as the app supports Auto Save. So an app like Apple’s Pages, for example, will contiuously Auto Save to help you when you fall asleep at your keyboard and delete your thesis. To access old versions of docs, you use the aptly-named Versions feature.

9. AirDrop — AirDrop is a new app that lets you share files wirelessly with other compatible Macs. It uses a peer-to-peer Wi-Fi network to transfer those files and doesn’t require any prior setup.

10. Lion Server — While it may not apply to everyone, the new Lion Server — which costs $50 rather than $30 — adds a lot of functionality for those who want it. The new version of Server offers enhancements like a setup assistant, improvements to iCal and Mail Servers, and file-sharing capabilities for the iPad.

Will you be downloading Lion today? What feature are you most excited to use?