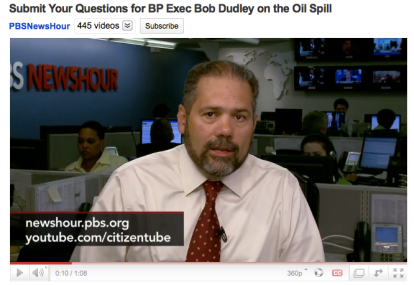 At 12:30 p.m. Pacific time on Thursday, Bob Dudley, CEO of BP’s Gulf Coast Restoration Organization, will answer questions from the public about the oil spill in the Gulf of Mexico and what it plans to do now, via an internet broadcast hosted by Google, YouTube and the PBS NewsHour. Viewers are invited to submit questions for Dudley, who has quickly become one of the most despised executives in the world.

This is the first time that any senior executive at BP has taken questions since the spill began.

Dudley will speak directly from BP headquarters in Houston during the session, moderated by PBS host Ray Suarez. Questions are expected to pour in regarding solutions to the spill — which has been ongoing for the last 71 days — how BP should be held accountable for its role in the disaster, what the company will do to repair and reclaim the surrounding environment, how the U.S. government should respond, and how it will approach deep-water drilling operations in the future.

Users can already submit questions through YouTube’s CitizenTube portal. The site uses a tool called Google Moderator to deliver questions to the people being recorded in real-time. Viewers can also vote questions up and down so that the crowd favorites are asked.

So far, 39 questions have been submitted by 65 people, and 380 votes have been cast. Queries already listed include:

– “Many incredible minds in this country have submitted intelligent ideas to stop the oil leak. Why have none of them been tried?”

– “While other companies, such as Exxon, have relatively impeccable records with regards to regulatory violations, BP stands out as a habitual offender, some reports suggesting that your ratio to other companies is 100/1. How do you account for this?”

– “Is BP standing by your CEO’s promise to clean up ‘every drop’?”

– “Why isn’t BP charged with animal cruelty yet?”

As you can see, it’s going to be a pretty tough crowd.

Google and YouTube have been working to make footage of and related to the oil spill available and easy to find for the public. Soon after the spill came to light, YouTube and the PBS NewsHour teamed up to livestream the gusher. Earlier this month, the internet video site streamed President Barack Obama’s address on the situation through CitizenTube, and allowed viewers to ask real-time questions to White House Press Secretary Robert Gibbs.

PBS says that some of the footage from tomorrow’s broadcast will be used during the televised program that evening. YouTube will probably host more of these types of events as the oil spill persists unchecked, and in the future around other major news items.