Just ahead of the iOS App Store’s 10th anniversary this month, application market research firm App Annie has released a revealing look at the all-time top apps and games, plus the developers behind them. The lists suggest that while big U.S. companies with global footprints led the App Store in downloads for its first decade, Chinese companies have been climbing the charts, in some cases achieving high rankings — and revenues — solely through downloads in China.

On the app side, Facebook utterly dominated the all-time worldwide downloads chart, holding four of the top five positions with its eponymous app, Messenger, Instagram, and WhatsApp. App Annie tells VentureBeat that the Facebook app has seen over 700 million downloads to date. Google’s YouTube ranked third, and Google Maps ranked sixth, while Snapchat, Skype, WeChat, and QQ rounded out the chart. 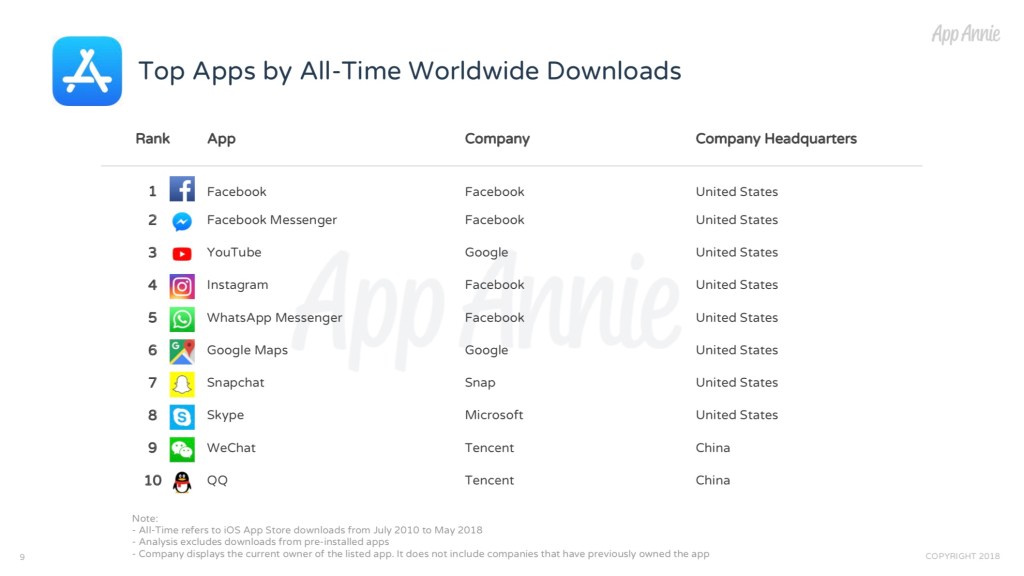 But when all-time worldwide consumer spending was the metric, Netflix was on top with nearly $1 billion in iOS revenue as of May 2018, said App Annie. Spotify, Pandora Radio, and Tencent Video continued the list, followed by Tinder, Line, iQiyi, HBO Now, Kwai, and QQ. If you’re not familiar with some of those names, that’s five video streaming apps, two audio streaming apps, plus dating, communication, and social networking apps.

When it comes to games, there was overlap at the top between the all-time most downloads and all-time worldwide spending lists. With over 280 million downloads, Candy Crush Saga is the most-downloaded iOS game of all time, as well as No. 2 on the all-time consumer spending list for games. The latter chart was topped by Clash of Clans, which App Annie says has earned over $4 billion to date. 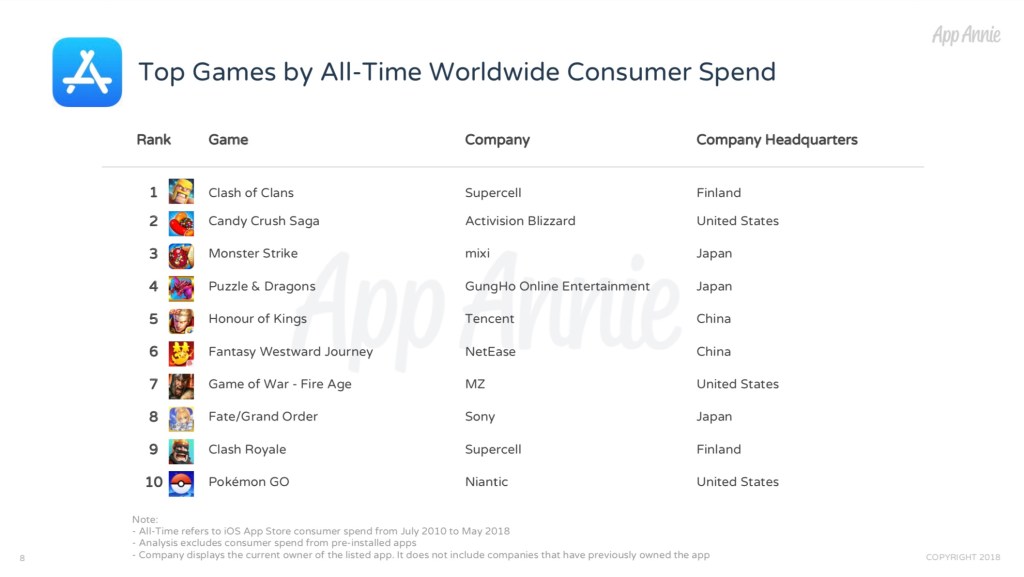 Interestingly, games such as Subway Surfers, Fruit Ninja, Angry Birds, Temple Run, and Asphalt 8 all made the most-downloaded list, but not the top spending list. For spending, Japan’s Monster Strike and Puzzle & Dragons took the No. 3 and 4 spots, while China’s Honour of Kings and Fantasy Westward Journey were No. 5 and No. 6, respectively. Niantic’s hit AR title Pokémon Go was the tenth-biggest earner, behind three war games.

As App Annie pointed out in an earlier survey, consumers in the Asia-Pacific region have become the App Store’s top spenders, and companies in the region have grown dramatically in recent years. Last year, Asia-Pacific consumers represented 59 percent of spending and 49 percent of all downloads, with each number rising annually across seven years. China overtook the U.S. as the App Store’s largest market in 2015, which explains how Tencent Video, iQiyi, and QQ have been worldwide-caliber hits despite their China-specific footprints.

The firm notes that China’s version of Netflix, iQiyi, “remains one of the largest streaming services by consumer spend in the world” in 2018, and that subscription streaming in general has been a major revenue generator for the store. Another big recent trend is social video sharing: 2018’s No. 1 app by downloads is China’s Tik Tok, which lets users create and share music videos. It claims to have over 150 million daily users in mainland China alone. 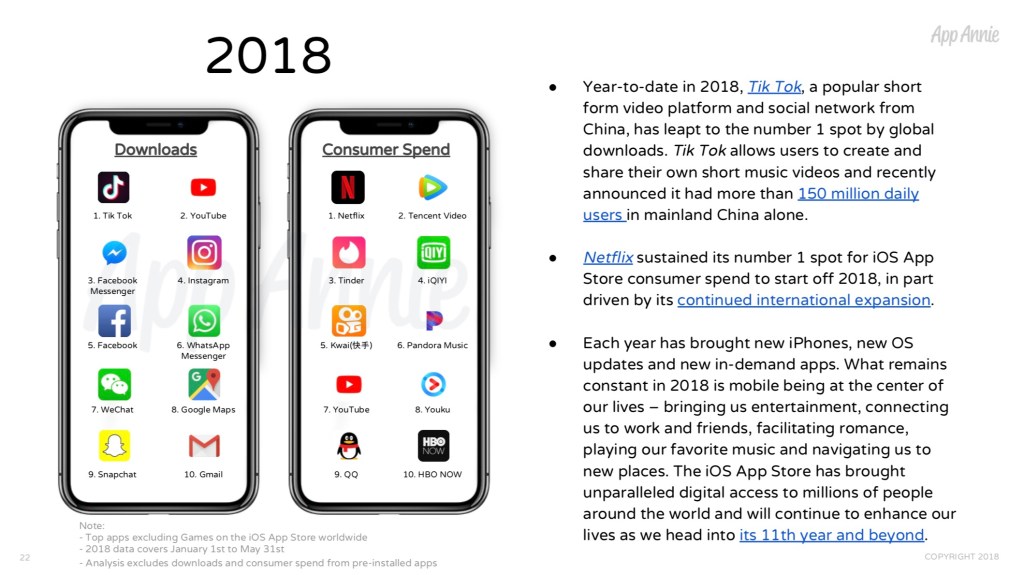 But the biggest story for Asia is Tencent, which was the No. 1 company for consumer spending — both for games and non-game apps — as well as the No. 2 company worldwide for game downloads and No. 3 for non-game downloads. Electronic Arts led the list for game downloads, with Google and Facebook topping the list for non-game downloads. Additionally, InterActiveCorp (IAC) claimed the No. 2 position for all-time consumer app spending, even though its name isn’t recognizable. That’s because it’s the parent company of Match Group, which offers popular dating services Tinder, Match, OkCupid, and PlentyOfFish, a particularly successful category of App Store apps.