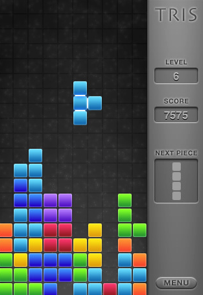 Tetris is one of those games that just works on mobile devices. It worked back on the Nintendo GameBoy, it works just as well now on the iPhone. Case in point: Tris, a variation of the game has been the number one application in Apple’s App Store for the past several days.

Tris, however, is not Tetris — it just looks and plays like Tetris. And that’s a problem. (As the developers of the Scrabulous Facebook application discovered.)

The Tetris Company (yes, there is a Tetris Company) has contacted Apple and asked them to remove Tris from the App Store. “That, I’m afraid, is essentially game over,” Tris developer Noah Witherspoon wrote on his blog today. Witherspoon thinks he might have a case if he tried to fight it, but seeing as he’s a college student without the time or financial resources to do so, he’ll simply give in and let the app be removed.

Witherspoon was nice enough to give everyone a heads up as to when Apple will be removing Tris from public availability: Wednesday, August 27 — as in the day after tomorrow. So if you’re so inclined, rush over to the App Store now and get it.

Did I mention it was free?

You can be sure that plays into this removal request as well. You see, Electronic Arts owns the rights to publish Tetris on the iPhone and it did so several weeks ago. It’s a great version of the game in its own right, with certain bells and whistles beyond the normal game play — but it’s also $9.99.

So, you can add Tris to the list of departed iPhone apps. At least we know why this one is being pulled, and we know about it ahead of time. PhoneSaber is another app that got pulled due to a copyright violation, but by the time word got out, it was already gone. Others, like BoxOffice (now called Now Playing), vanish and come back after correcting the issue that caused them to be removed.

You can find Tris here for the next couple of days.