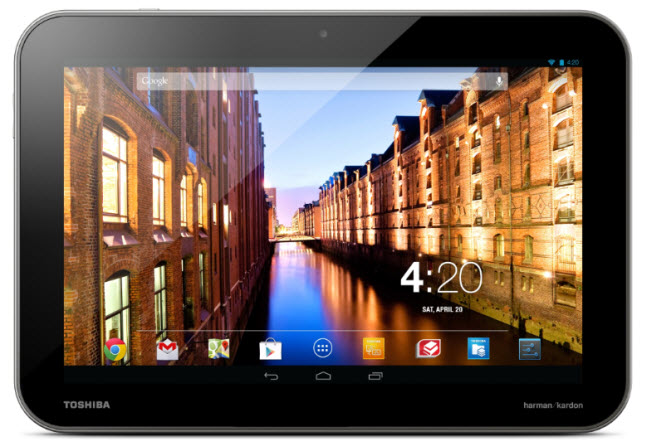 Toshiba announced today that it will refresh its line of Excite tablets with new technology, including a crystal-clearl screen with twice the resolution of most tablets. On top of that, Toshiba is launching a new line of laptops and desktops with Intel’s Haswell-based microprocessor technology.

Toshiba is launching three new Excite tablets based on the Android operating system. Two of the three models include the company’s signature display technology, the 2,560-by-1,600 PixelPure display, which competes with Apple’s own Retina displays for its tablets and laptops. The tablets include the Excite Pro, Excite Write, and Excite Pure. They have 10.1-inch screens, Nvidia Tegra 4 processors, Harman Kardon speakers, and a touchscreen digitizer for precise input and handwriting on the touchscreen.

The Japanese company said all three models are run on Android 4.2 Jelly Bean. Toshiba also launched a series of laptops and desktops based on Intel’s Haswell microprocessor technology.

“With more and more consumers adopting tablets as their go-to devices for entertainment and travel, we wanted to push the boundaries even further and equip our new Excite tablets with the technology and features needed to maximize the potential of these devices,” said Carl Pinto, the vice president of marketing at Toshiba’s U.S. division. “By focusing on boosting the capabilities of the screen – from increasing the resolution to adding a digitizer option – we’re also evolving the way consumers can use these devices from consumption to creation.”

The PixelPure display can cram 4 million pixels into the screen, or 300 pixels per inch. The Excite Write version focuses on productivity apps by bringing a “pen and paper” experience to the tablet screen thanks to the precise digital pen. The TruPen has 1,024 pressure points.

You can write words in cursive on the screen and it will search through your handwritten notes to find a match for your word. The device comes with Toshiba’s own TruNote app for editing and storying notes. It also has ThinkFree Office Mobile for Android for editing and creating documents.

The tablet also includes TruCapture, a Toshiba-developed application that quickly and easily captures whiteboard content using the tablet’s built-in camera and converts the snapshot for easier integration into presentations and documents. The Pro and Write models use the Tegra 4 processor and have an 8-megapixel camera. The Excite Pure uses the Tegra 3 processor.

Toshiba also offers an option of having a keyboard that turns the machine into a laptop. You twist the keyboard around and it becomes a protective cover for the machine. The Excite Pure (with a 1,280-by-800 Autobrite screen) will sell for $299, while the Excite Pro is $499 and the Excite Write is $599. The tablets will be available June 25 from ToshibaDirect.com and from major retailers in July.