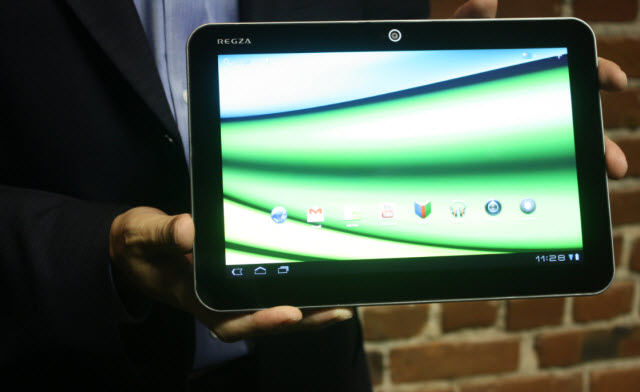 A new generation of tablets will be on display at the Consumer Electronics Show this week, including a 10-inch Android model from Toshiba.

The new Excite X10 tablet from Toshiba is one of the thinnest and lightest of the bunch, at just 0.3 inches thick and 1.2 pounds. The device joins other Toshiba Thrive models that are already on the market, realizing a tablet trend that started with the Apple iPad and is now gaining full momentum in the broader computing market. 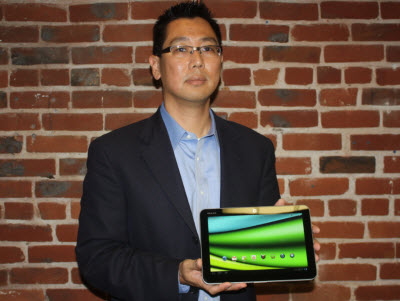 The device has a magnesium alloy on its back, Corning’s durable Gorilla Glass as its surface and a particularly bright and colorful screen.

“This is one of our new concept products for the year,” said Phil Osako (pictured) director of product marketing at Toshiba’s U.S. division.

In contrast to the Apple iPad, this machine has a lot of ports, including Micro HDMI, Micro USB, and Micro SD so that it is easy to transfer files onto and off of. It has a two-megapixel front-facing camera and a five-megapixel rear-facing camera with a flash. On the sides are a power button, volume up/down, and a rotation lock switch.

It has a docking connector so you can add things like stereo speakers. It has a file manager and the latest Android media player, with the ability to play music, videos and pictures. It also has DLNA capability so it can be connected to other devices on the same network, giving you the ability to stream from the tablet to a TV or stereo. You can upscale videos and use Toshiba’s audio enhancement technology.

It uses the Ice Cream Sandwich version of the Android operating system from Google and will be available in the middle of the first quarter. The device has WiFi, GPS, and Bluetooth connectivity. A 16-gigabyte version will sell for $529 and a 32-gigabyte version for $599.

Toshiba’s existing 10-inch Thrive model will also now have the option to use 4G mobile broadband service provided by AT&T. The 4G HSPA+ technology will sell for $80 and will allow users to get on the mobile internet when WiFi isn’t available. Toshiba expects to show future tablets with 5-inch, 7-inch, and 13-inch screens at its booth.

Osako said one of the big changes this year is that Toshiba won’t have any netbooks on display, since tablets and upcoming Ultrabooks have pretty much wiped out that market.

Toshiba also has some new models of Portege laptops on display.