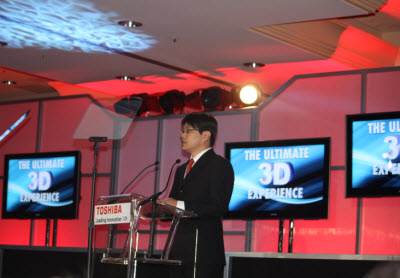 Toshiba is introducing its Cell TV in North America, putting a kind of supercomputer in the living room, the Japanese company said at its Consumer Electronics Show press conference today.

The Cell TV has 143 times the typical performance of a TV and can use that brain power to convert two-dimensional images to 3-D images in real time, or instantaneously. The Cell chip — developed by IBM, Toshiba and Sony — is best known as the heart of the PlayStation 3.

“It is not just a TV anymore,” said Scott Ramirez, vice president of marketing at Toshiba’s North American consumer products division. “This is the one people will talk about when they go into the store and say they want the best.”

A TV with 480 hertz in 2-D mode can be converted to 240 hertz for each eye when in 3-D mode. That’s good quality. The Cell TV will take anything 2-D — like games, movies, Blu-ray films, TV shows — and convert it into content you can view with 3-D glasses. The Cell TV will have built-in Wireless HD networking as well, so you can transfer high-definition video around your home.

If the TV takes off, it will be the second major platform to take off with the Cell chip. In 2010, Toshiba is introducing 10 new series of TVs. The series include the Toshiba, Cinema, and Cell TV models. The Cell has eight processing engines and can do 200 gigaflops of processing. That’s about 10 times more powerful than a typical PC. The chip can eliminate noise from pictures, convert 60 frames into 240 frames each second, and otherwise spruce up your picture on brightness, contrast, color and other details.

Toshiba also touted web-connected TVs. Web-connected TVs will include things such as video phones, better access to video content, social networking, and more. Like LG, Toshiba says 2010 will be a great year for 3D viewing in the home. Toshiba is also introducing a Blu-ray movie player that is capable of producing 3-D imagery on the screen. TV revenues were down 4.5 percent across the industry in 2009, mainly because of huge price cuts. But Toshiba is high on LED TVs, which actually saw a price increase in 2009 because the screens are brighter, consume less energy and are thinner than traditional LCD TVs.