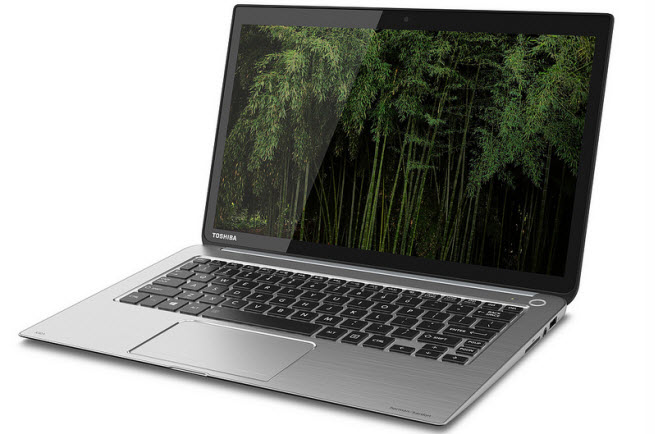 In geek circles, Apple’s MacBook Air is worshipped as a godly gadget. Toshiba is going after that today with the launch of its KIRAbook laptop, a high-end machine that is designed to be nicer than Apple’s object of affection. For Toshiba, this isn’t just the launch of one computer. It’s the start of a brand, dubbed KIRA.

The machine is made of high-end materials and it has a spectacular display that can rival Apple’s Retina Displays. But it’s pricey, starting at $1,599 for a 13.3-inch model and rising to $1,999 for a high-end version. That’s a very steep price for a Windows 8 laptop, which can be found below $600 these days. But it’s a statement that says Apple isn’t the only computer maker that can employ craftsmanship in its products.

The PixelPure display’s native resolution is 2560-by-1440, giving you razor-sharp clarity. No other Windows 8 laptop has such ultrahigh resolution, which delivers 221 pixels per inch on the 13.3-inch screen. That’s a 90 percent increase over standard high-definition displays (with resolutions of 1920-by-1080). When you turn it on and view a web browser with that resolution, everything seems tiny. You have to blow up the text to be able to see everything. That plain text is a lot sharper and easier to read.

It’s great for looking at your own content, but it the machine uses Intel’s HD 4000 integrated graphics, so you won’t be playing heavy-duty games on it. You also won’t find 4K resolution content in large quantities to view on this machine, as Hollywood isn’t quite caught up with that technology yet.

The case is built with AZ91 pressed magnesium alloy and a honeycomb base that makes it feel solid. Toshiba says that is twice as strong as typical aluminum alloy laptops. It also uses Corning Concore Glass, and its exterior is resistant and durable. But the machine weighs only 2.6 pounds and it is 0.7 inches at its thinnest point. The edges of the laptop are stylishly rounded.

The battery life isn’t great, but it’s acceptable. The KIRAbook uses a high-capacity lithium polymer battery. It also has a 256GB solid state drive (flash memory) and 8GB of 1,600 MHz main memory. The machine is fast and responsive.

One of the drawbacks is that Toshiba’s machine is using Ivy Bridge, the combo graphics-processor third-generation Core platform that is nearing the end of its life cycle. Intel is releasing code-named Haswell processors in June, but Toshiba couldn’t wait for that. It will update KIRAbook with Haswell, but not until late this year.

The high-end models have touch screens and Intel’s fastest Core i7 processors, including the high-end 2.0 GHz Intel Core i7-3667U. The sound system has Harman Kardon speakers and DTS audio processing. The machine uses Toshiba’s AirFlow II technology, a thin multi-phase fan cooling system. The hinge is stabilized so when you pound on the touchscreen, the machine won’t lean back.

The machine comes packaged with Adobe Photoshop Elements 11 and Premiere Elements 11 software, and it has a two-year subscription to Norton Internet Security, Norton Anti-Theft, and Norton Online Backup. Photoshop will shine on this machine, as you’ll be able to take advantage of the high resolution by looking at more content at the same time.

Toshiba is providing its Platinum service and support. It is available today at Amazon.com, BestBuy.com, the Microsoft Store, B&H, Adorama, and on Toshiba Direct. The Kira brand will likely serve as the high-end of Toshiba’s lineup. Other laptop brands include Satellite, Portege, and Qosmio.