Before you other platform loyalists edit that gif to create an angry meme directed at Capcom, do me a favor; have a seat. Relax for a few minutes. Let me explain to you what Super Street Fighter II : The New Challengers – The Tournament Battle is, why you may have not seen or heard of it, and why it may not be a great fit for the other platforms.

Let’s talk about The Tournament Battle 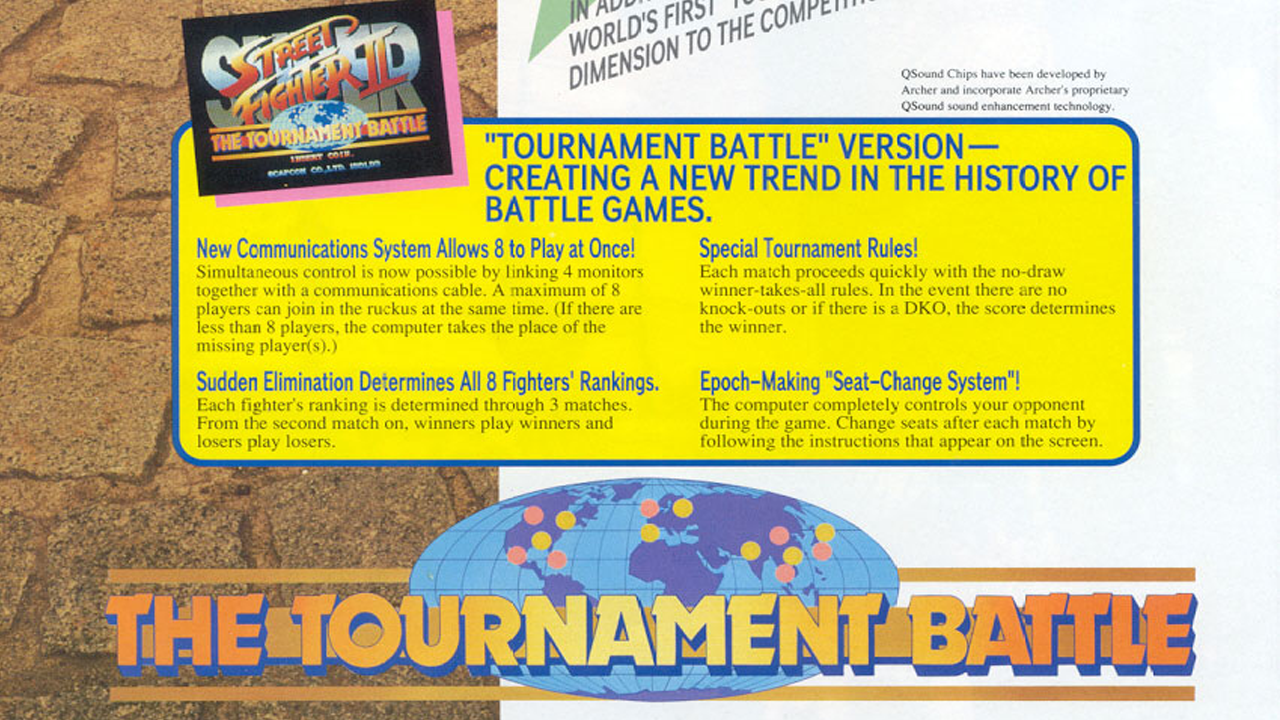 Tournament Battle was one of 1990s’ Capcom’s few well-intentioned arcade flops. On paper, it sounds like a fantastic idea: An arcade operator can link up four arcade machines running a special version of Super Street Fighter II : The New Challengers, which features a tournament mode. This tournament mode would enbale eight players, two per machine, to participate in a single-elimination tournament. When a round in the tournament has completed, the game will instruct players to move to a specific spot on a specific machine to set up the next round of the tournament.

There would be no need for a player to bust out a pen-‘n’-paper to seed and draw out a bracket, because the game will figure that all out automatically.

This was the 1990s. We didn’t have apps or online tournament software to seed and run brackets for us. Tournament Battle, as a concept-of-convenience for event organizers, was ahead of its time. But Tournament Battle also had some significant hiccups that seemed a bit too out-of-touch with what both arcade operators and players needed.

The reality for arcade operators For Western arcade operators, the concept of Tournament Battle was a hard sell. Supporting Tournament Battle meant purchasing four new CPS2 board kits, which back in those days were not a cheap investment. Those four boardsets would then have to have four Street Fighter-ready arcade cabinets, sitting next to each other, to drop into.

The advertisement Capcom put out to arcade vendors to advertise Tournament Battle show the game running on four of Capcom’s deluxe “Big Blue” cabinets. Capcom’s Big Blues weren’t just expensive pieces of equipment back in the day — they were humongous beasts as well!

The floor space required to support a Tournament Battle setup like that made the game unfriendly, and unrealistic, for operators with pizza parlors and liquor stores on their game route. The Tournament Battle concept only really works in a large dedicated arcade with significant floor space.

Keep in mind that Tournament Battle hit during the height of the first fighting game explosion. Developers were flooding the arcade market with their own fighting game titles, and for an arcade operator to dedicate the foot space and revenue of four different fighting games that were independent from each other, for one that tied up all four units per play, was a rare luxury.

The reality for players 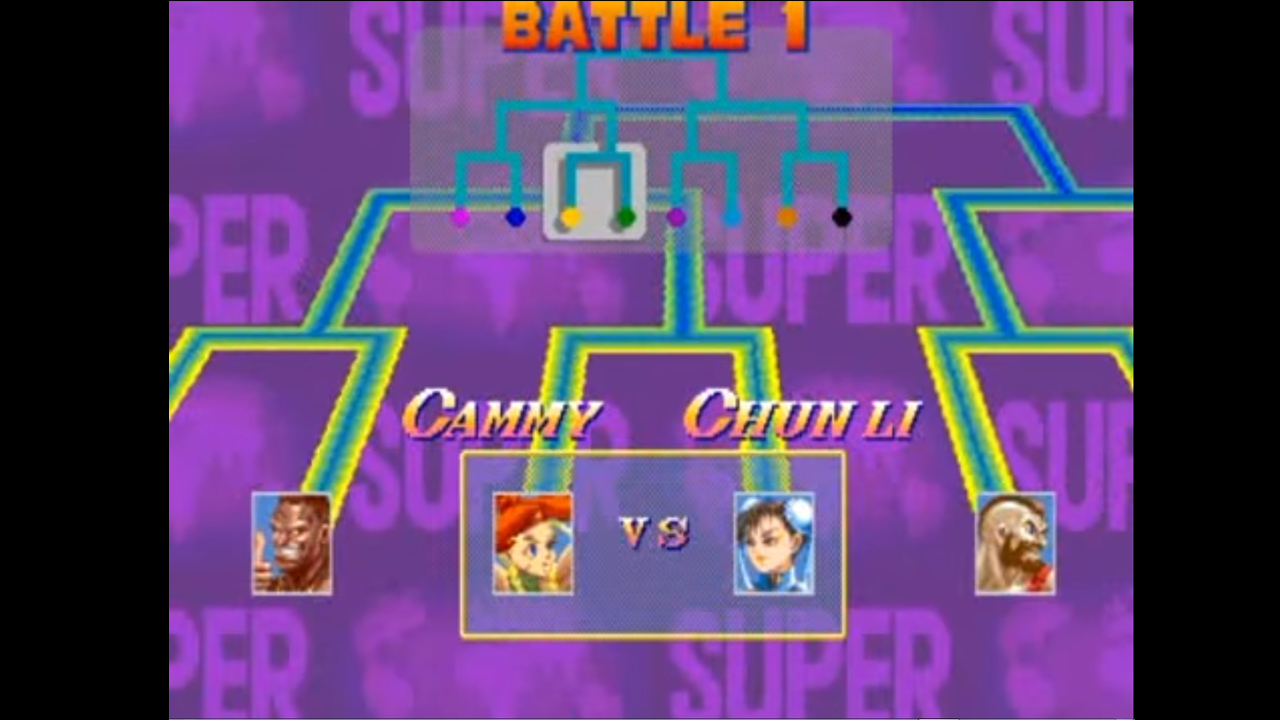 Above: No pen n’ paper required!

On the player side of things, the Tournament Battle experience also has some issues. Although Tournament Battle will throw in an AI opponent if there aren’t enough human players available, the experience really requires eight humans in order to be worthwhile. Otherwise, why not just play regular single-player mode?

Getting eight people together for a tournament wasn’t difficult if someone put up posters, had prizes available, allowed time for sign ups, and overall pre-planned for the event. But Tournament Battle was meant to allow a tournament to come together at the drop of a quarter.

And if you did get eight willing players, as an American teen at the time, I can safely say that the possibility of getting at least two trolls in the mix was 100 percent. Someone was going to purposely screw the tournament up.

And a Tournament Battle session is very easy to screw up, even if you aren’t trying to. After a one-round game versus an opponent, which is pathetically short for competition, players are then given ten seconds to decipher which position, at what machine, the on-screen UI is ordering them to move to.

This sounds straight forward, but I want you to stop and think about the last time you commuted to work or school. I don’t know about you, but on a daily basis I see human beings incapable of making a straight line, ignoring signs telling them to stand on the right side of an escalator, confused about what BART train they just jumped onto while a bright red electrical sign blares the information overhead, and struggle figuring out who should go at a 4-way stop sign during rush hour traffic.

Now imagine eight strangers scrambling around four Street Fighter cabinets and arguing over who is supposed to be at which position, at what machine, while a ten second counter ticks down. Yeah … good luck with that.

The reality for Nintendo Switch owners

So now that you know how Tournament Battle worked, and what it required of everyone involved, it should make sense why Nintendo Switch received this exclusive. The Nintendo Switch’s natural portability makes it a much friendlier platform to link up four units than, say, the PlayStation 4.

It may actually be even more convenient to set up Tournament Battle on the Nintendo Switch than the original hardware. Unless you have four Street Fighter cabinets in your living room, or four SuperGuns with four CRT TVs and four full CPS2 versions of the game. And if you do, I’m jealous! I have a garage full of Street Fighter arcade equipment, and even I don’t have that!

Bonus round: What about Super Street Fighter II Turbo? Well, according to The Cutting Room Floor it seems Super Street Fighter II Turbo did have its own version of Tournament Battle, titled League Battle. According to a note in the CPS2 rom, it was going to be just like Tournament Battle mode, except Capcom was swapping the single elimination bracket for a round robin format. Round robin is where every player plays each other, and the participant with the best win/loss record wins.

Could this be something Capcom could switch on for the 30th Anniversary Collection? I’m not sure, but it would be cool!

I don’t. I appreciate Capcom adding it to the already fantastic list of Street Fighter titles on their 30th Anniversary Collection. In case you haven’t read my previous articles, I love the Street Fighter series. And seeing that Tournament Battle is going to be accessible to everyone (with a Nintendo Switch) is so much better than seeing the game remain buried as a weird foot note, where only the most dedicated arcade hardware collectors are able to experience it.

With that said, it wasn’t a big success either. Tournament Battle represents a time when Capcom had the resources, and the spirit, to take fun and quirky risks. I’m a firm believer that it takes a lot of experimental failure before anyone strikes on success, and Tournament Battle is an example of the former for Capcom.

We’ll all be able to try Super Street Fighter II: The New Challengers — The Tournament Battle, on the Nintendo Switch, when Street Fighter 30th Anniversary Collection launches in May.