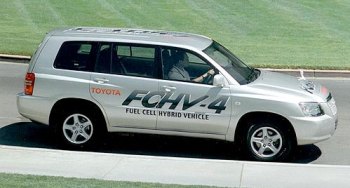 Toyota plans to have more than 100 hydrogen fuel-cell cars on the road by 2013, the company has announced. While most of them will be given to government agencies and universities for testing in California and New York, expanding this pilot program is designed to attract consumers to the idea of hydrogen-powered cars before automakers introduce them to the market in 2015.

This is the third pillar in Toyota’s robust green technology strategy. Already, Toyota’s Prius is the dominant brand in low-emissions vehicles, giving Toyota  the crediblity it will need to successfully launch the revamped, plug-in version of the Prius in 2012. Both Priuses have built a strong foundation for Toyota to move beyond battery technology to fuel cells.

“We plan to come to market in 2015 or earlier with a vehicle that will be reliable and durable, with exceptional fuel economy and zero emissions at an affordable price,” Toyota head of environmental affairs Irv Miller said during the announcement.

The major automaker started testing fuel-cell technology in 2002 with a fleet of 20 vehicles in California. In the last eight years, it has more than doubled the range of its fuel-cell hybrid vehicles (FCHVs). In late 2007, it took of the models on a seven-day road test between Fairbanks, Alaska and Vancouver, Canada. The cars are said to get 68 miles per gallon of gasoline and have a driving range of 431 miles while emitting zero greenhouse gases.

The one snag in Toyota’s plan? It might be hard to find a hydrogen station to fuel up. The company hopes its program, and those being explored by its competitors, will jump start the development of hydrogen fuel infrastructure. Producing the hydrogen fuel cells themselves isn’t too difficult. It only requires electricity and water. The trick will be to accelerate both car production and infrastructure development at the same right and at the right time to achieve rapid adoption, Toyota says.

In September, Daimler also came out with similar plans to get average consumers behind the wheel of hydrogen fuel cell cars by 2015 (and is looking to partner with Toyota in the endeavor). The big challenge, that company said, will be to make them cost-competitive with other automotive options. It hopes to commercialize a hydrogen version of its compact Mercedes Benz B class, which it unveiled at the auto show in Frankfurt in the fall.

It will be interesting to see how much companies collaborate in order to make a hydrogen fuel cell hybrid a reality. Considering the hurdles ahead — both the steep costs and the need for extensive, perhaps policy-motivated, changes to fuel infrastructure — it seems like even the biggest names in the car industry will be willing to partner so that more can benefit.