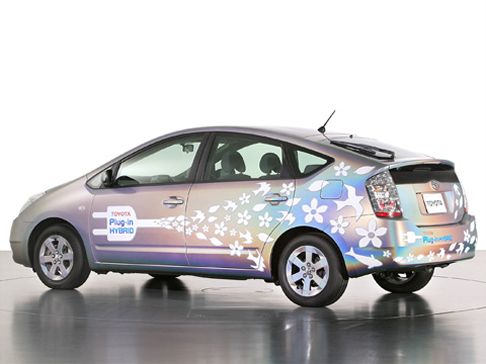 Toyota launched its plug-in hybrid electric vehicle in Japan today, setting it up to compete directly with General Motors’ Chevy Volt, which it resembles operationally. Given that the car has the longest driving range and best fuel economy available in a market-ready car so far, its impressive that Toyota predicts a retail price below $35,000 — making it one of the most affordable advanced cars to hit the market in the next two years.

Toyota benefits tremendously from the name recognition created by it Prius brand — in the last seven years, a million models have been sold, about 75 percent of the hybrids in the U.S. This could give future vehicles an advantage. This new iteration of the hybrid travels 14.5 miles on electric power alone before the gas-powered generator switches on. On paper, the vehicle can travel up to 870 miles with a full battery and tank of gas.

The car represents Toyota’s best and only bet when it comes to the advanced vehicle market. It doesn’t have a fully electric model in the works like Tesla Motors, Fisker Automotive and others. The company argues that lithium batteries are still an imperfect science, allowing too small a driving range for too high a cost. Also the lack of charging infrastructure limits their practicality.

Reuters reports that the new Prius PHEV will have a top speed of 62 miles per hour when its running on electricity alone, able to travel 134 miles per gallon. By this measure, the vehicle probably has a 6.75 gallon tank. It’s first Toyota to use lithium ion batteries, which could charge in three hours when plugged into a standard wall socket.

Toyota says the PHEV will be widely released in the next two years. This isn’t that groundbreaking a deadline. Even Tesla expects to be be churning out its Model S sedan by the end of 2011. The company says it will first lease the vehicles to consumers in Strasbourg, France as a pilot group. Beginning this month, about 100 vehicles will be leased there. The city was chosen because it has more than 300 electric vehicle charging stations. Nowhere in the U.S. has equivalent infrastructure despite the efforts of companies like Better Place and Coulomb Technologies.

Before general release, Toyota says it will lease 600 of its Prius PHEVs, 150 of which will be in the U.S. The Toyota brand alone could be enough for the traditional automaker to continue its domination of the green car market, despite near-term releases of the Chevy Volt and Nissan Leaf.