Simon Furman has been involved with Transformers since the brand turned from a Japanese toy into a Western phenomenon in the 1980s. He started on the fan-favorite British run of Marvel’s original Transformers comics, joining the U.S. books later in their run. He wrote stories for later Dreamwave and the acclaimed rebirth of the comics for IDW.

But he’s never written for a Transformers video game before. “Though I, along with Andrew Wildman, had some involvement in the Atari Transformers: Armada game that was released in 2004, creating an in-pack comic book — based on the gameplay — for its U.K. release,” Furman said in an email interview.

He is now. Furman contributed to Transformers: Earth Wars, a mobile strategy game. You build a base and attack those of other players with your Cybertronian warriors. The art borrows from the classic “Generation 1” designs that the ’80s cartoon and comics made popular, and these still exist today in toylines from Hasbro, the IDW comics, and TV series like Cartoon Network’s Transformers: Cyberverse. Heck, these beloved designs are even making it into the new Bumblebee film (just look at that glorious Soundwave and Ravage).

Furman worked on the backstories for two characters: the Autobots’ Sentius Maximus and his sparkbrother, the Decepticon Sentius Malus. They’re two sides of one coin, a guardian once known as Sentius Nobilus. Back on the metal world of Cybertron (the home of the Transformers), Nobilus was a guardian of the relics of the Primes (the leaders and gods of Transformers). He had a great weapon, too, the Sword of Balance. But his spark (that’s the heart-and-soul of a Transformer, and destroying this kills them) ended up split in two, as was his sword, birthing Maximus and Malus. They both also carry energy bows and transform into cannons that walk around like crabs.

“Earth Wars is the first direct writing for a computer game I’ve done, and I’ve really enjoyed the experience,” Furman said. Here’s the rest of our email interview. 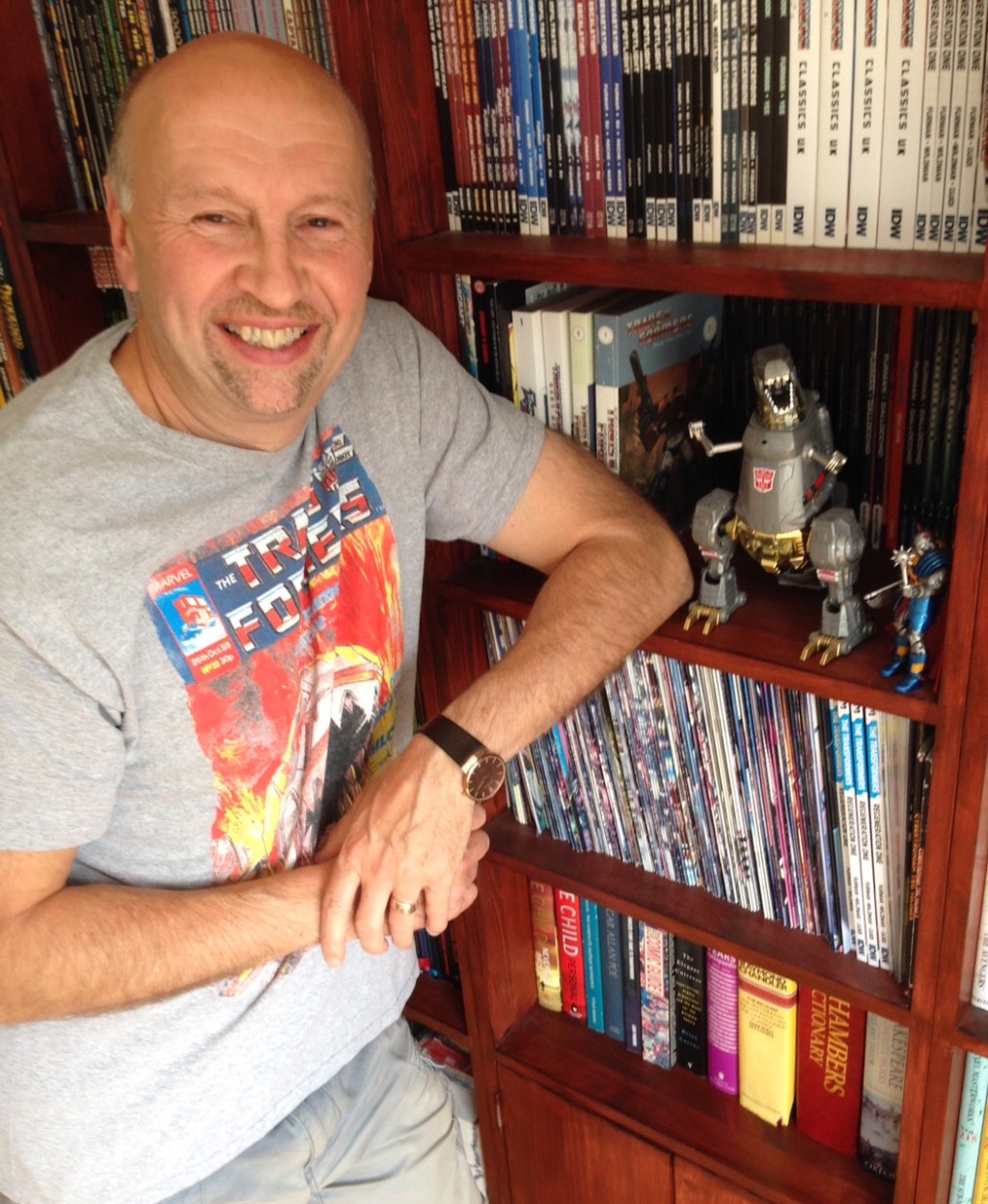 Above: Simon Furman, a writer who made his name in Transformers comics.

GamesBeat: How does writing a character for a video game differ than doing so for a comic? For a TV show?

Simon Furman: For a start, working on Earth Wars has been much more of a collaborative “team” effort than either comic books or TV animation, though the latter has a fair amount of that, too. And I’ve had to get used to writing on spreadsheets, which was strange at first. But I soon got used to it.

The main difference here is that — aside from the basic character poses/motions that go hand in hand with the storylines — it’s more like writing a radio drama, where you can’t rely on visuals to tell the story. It’s all dialogue — so that means the dialogue has to be that much more descriptive of the action, without continually saying, “Oh, look — here’s a big whatever coming over the hill.” It’s been a challenge, but I like that. And I feel very much in the swing of the “form” now.

GamesBeat: How many Transformers games have you played?

Furman: To be honest, not many. We did have a play around with the Atari game but not to any great extent. But I have dabbled in Earth Wars, just so I have a feel for the actual gameplay and trappings, which I can then feed into my storylines.

GamesBeat: How interested are you in writing more for video games?

Furman: Very. In fact, I already have. I contributed quite a few ideas and dialogues to Space Ape’s Fastlane: Road To Revenge. But while comics remains my main focus, I’d definitely be up for more gaming work in the future. The great thing about Earth Wars is that the job is very much ongoing, and we’re building an ever-more expansive and interconnected saga/storyline with genuine impact on not just the game itself but the larger Transformers universe. The current Prime Cores saga has been our most ambitious and far-reaching to date, and we’ve premiered the Dinobot Combiner Volcanicus and the Sentius Maximus/Malus twins. So all in all Earth Wars is keeping me very busy — and challenging me as writer, too.

GamesBeat: When creating a Transformer character, do you think of just how it will fit comics, or do you think about its potential for toys, TV, and more, too?

Furman: Back in the day, we were very fast and loose with the characters we created — sometimes we didn’t even give a thought to what they might transform into — in the stories and comic strips. But nowadays, we’re so much more aware that these characters are going to endure and be used in other strands of the Transformers brand — toys, TV and so on. So it’s a much more measured, hand-in-hand with Hasbro process these days — making sure everyone’s happy with the look and personality and general place in the grand scheme of things.

With the Sentius Maximus/Malus twins, it was a carefully staged process of roundtable ideas, design and redesign, until we got a pair of characters that would work as well in-game as out, fully realized and transformable and connected to the overall mythos that’s been built up for over 30 years now.