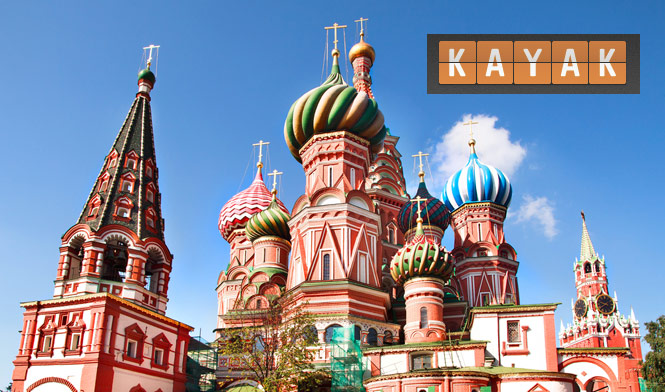 Ahh, LinkedIn we love you.

People can never seem to wait with their profile updates until the public announcement is out. At least, that seems to be the case with Andrew Verbitsky, a former Accenture consultant, venture capitalist, and now Managing Director Russia & CIS for Kayak: 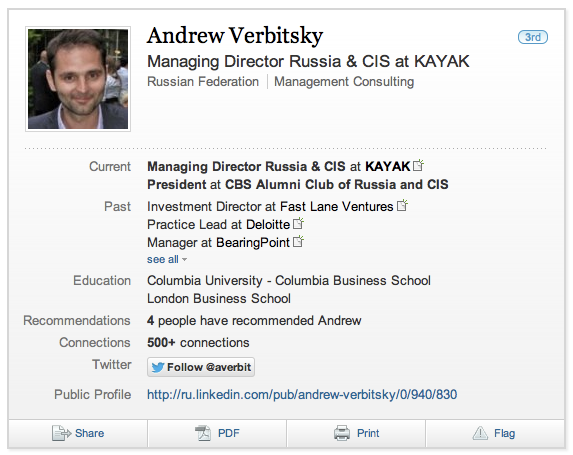 The same Kayak that just priced its initial public offering at $23-25 per share, seeking to raise about $100 million. I just checked the company’s S1 filing for going public, and the word “Russia” makes not one single appearance.

Much of the S1 is pure boilerplate, probably including a fairly generic statement about expansion. However, if Kayak is indeed expanding to Russia, this is where the tip-off in the S1 filing would be:

We may also use a portion of the proceeds to expand our current business through acquisitions or investments in other strategic businesses, products or technologies.

In addition, as Quintura noticed, kayak.ru is now forwarding to kayak.com. Previously, the .ru domain had belonged to an actual kayaking club.

An expansion to Russia makes a lot of sense for Kayak, given that the Russian ecommerce market is booming — growing to $40-60 billion by 2020, and is the largest online market in Europe, with 70 million Internet users. Coincidentally, travel industry research firm PhoCusWright (!) just reported that online booking for travel in Eastern Europe and Russia is growing quickly: faster than 25 percent annually for the next two years.

VentureBeat has contacted Kayak PR for details and we will update as they come in.

Verbitsky, meanwhile, has added just one line to the Experience section of his LinkedIn profile that mentions his current job:

“Having great time swimming against the tide.”

I received an email from Max Kraynov, who is the Managing Director of JetRadar (aviasales.ru in Russia).

I’ve just read your “Travel deals site Kayak entering Russia just prior to IPO?” article and want to offer a couple of insights if you’re interested.

First of all, I’m the CEO of aviasales.ru (AKA JetRadar in other markets), the key competitor of Kayak, Momondo and Skyscanner. We’re the #1 in Russia, hence, as you can imagine, the topic is quite interesting to me.

Secondly, KAYAK started advertising for an MD position in Russia in Feb-Mar 12. They found Andrey Verbitsky in May. He’s ex-Fast Lane Ventures person, and FLV has a mixed reputation since their model is taking Western startups and adapting them to the Russian realities.

Thirdly, they considered regional acquisitions but chose not to do them. (Won’t tell who they were looking at out of courtesy to KAYAK).

Now the interesting part. So far they haven’t got any contracts with the Russian OTAs and airlines. The ITA software technology is pretty much useless outside the US, hence they would have to build something similar to what we’ve done in Russia. They estimated their time to market to be around 4-5 months, but in reality (unless they make a fast acquisition, and there’s no one for sale on the block) if they want to make a product and not just put a lipstick on a pig, this would take 8-12 months.