Skyscanner, one of the internet’s oldest and largest travel search engines, has announced that it’s pulling together its various search smarts under one roof, meaning that you’ll now be able to dig out the best prices on flights, hotels, and rental cars from a single app. 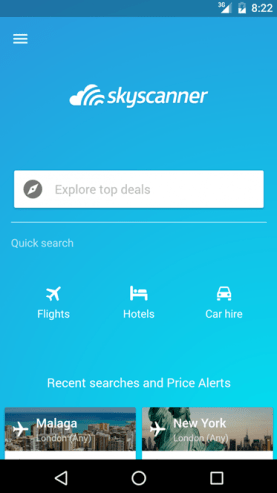 Though Skyscanner started out as a flight search engine, aggregating the best prices and dates for destinations around the world, the company has been edging into related travel territories, but so far has kept them separate with standalone apps for car hire and accommodation. Today, the company is updating its Android and iOS apps to bring them all together.

The apps also come with a host of new features, including a Top Deals section highlighting bargains for summer holidays, city breaks, and more. It also sports an upgraded Quick Search function that automatically syncs hotels and car hire with flights, to save the user from having to re-enter times, dates, and destinations.

Founded out of Edinburgh, Scotland in 2003, Skyscanner went on to become Europe’s largest flight search engines by traffic, and one of the world’s largest after Kayak. Today, the company claims 50 million monthly users, with 700 employees across the U.K., Europe, Asia, and North America. Earlier this year, Skyscanner raised $192 million — its first substantial outside funding — reportedly elevating the company into the coveted “unicorn” club.

Consolidating its core travel services into one app makes absolute sense, and in many ways it seems odd that it would not have done this from the get-go. Why wouldn’t a flight-search company include hotel and car hire searches in the same app once the decision was made to expand its coverage beyond flights? According to Skyscanner CEO and cofounder Gareth Williams, it was all about trying to keep things simple.

“As with much of what we do, the move [to consolidate] was greatly informed by our customers,” Williams told VentureBeat. “Previously, we’d had three separate apps to ensure we could give travelers the right level of detail in their search. As such, we’ve worked hard to ensure this combined travel search app continues to have that same detail without being too data-heavy for smartphones.”

So Skyscanner was initially cautious about bloating its core flight-search product by keeping things separate, but the bottom line is it makes sense for the company to be able to cross-sell additional services, while keeping them all perfectly in sync and ready to book.

This also bucks a trend we’ve seen elsewhere in the tech realm, with numerous companies unbundling features into standalone apps. Back in 2014, Foursquare split its location-sharing and business-discovery offerings into separate entities, Facebook infamously spun out Messenger as its own standalone product (similar to what it did with its Groups feature), and Line made its Vine-like video feature an app unto itself. More recently, Uber launched a separate app for ordering food called UberEats, while BitTorrent spun out its Sync business as a new unit called Resilio.

While keeping things separate can — and often does — make a great deal of sense, in some cases the respective services are just too complementary to keep apart.