Travel search engine Kayak has taken on $196 million in additional funding from a prominent group of investors.

It has separately purchased main rival SideStep for $180 million, as well as $20 million in the company’s bank account for a total of $200, Techcrunch first reported. [Update: We now hear from a source that the total sale was for slightly less: $175 million plus $18 million in cash, for a total of $193 million.]

Together, the companies will aim for a “tremendous” initial public offering next year, said Woody Marshall of Trident Capital, an early investor in SideStep, confirming the news.

[Update: The company itself is demure about the possibility of an IPO, saying instead that it wants to focus on being the number one travel site in the coming year.]

There has already been “strategic interest” in both companies — potential acquirers — Marshall said.

Norwalk, Connecticut-based Kayak and Santa Clara, Calif.-based Sidestep are the two market leaders in this search vertical (see Hitwise graph below), and have mostly separate user bases, according to Marshall (note: He’s no relation to Matt Marshall, VentureBeat’s editor) .

Smaller travel search competitors include Farecast, Mobissimo, cFares, Tripit, niche travel products, off-the-beaten-path vacation search Tripology, and many others. The larger of these startups may now be acquisition bait, as leading travel sites like Expedia and Orbitz or large internet companies like Yahoo and Google look to expand their travel search services.

Kayak will be the main brand, and Sidestep will use Kayak’s search technology, although Sidestep will keep its brand, Marshall said. Key members of SideStep will join Kayak’s team. The companies say they will combine travel data, such as travel rates and availability, and other services. Affiliate partners of the companies include: About.com, Comcast, LonelyPlanet, Rand McNally and USA Today.

The advantage of an IPO will be to boost the company’s brand awareness. Cash isn’t the paramount consideration, since the merged company already has ample funds for further expansion, Marshall says.

Both companies have racked up venture capital funding. Kayak took funding from General Catalyst, a Boston firm that first looked at Sidestep (see here), as well as Sequoia (Michael Moritz was the lead investor, and will now join Kayak’s board), Accel Partners, and AOL. Our previous coverage here. 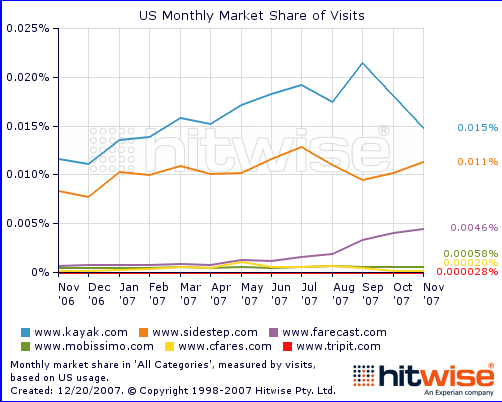