TreSensa has launched Creative Builder, a design tool that enables game developers and marketers to easily create and distribute playable ads, or ads that enable players to instantly try mobile games and then download them.

Rob Grossberg, CEO of New York-based TreSensa, said in an email that the tech is becoming easier to use at the right time because playable ads are going mainstream, as evidence by endorsements of the general technology by companies such as Google, which is using them for the Google Play store. Facebook also launched playable ads last year.

“TreSensa has been extolling the virtues of playable ads for years, and it looks like the hard work is paying off, as playables are finally going mainstream,” said Grossberg.

The tool is targeted at game studios, publishers and brand marketers so that they can easily create and distribute playable ads with no coding or training required. During the past few years, playable ads have evolved from a novel alternative for testing to a “must have” advertising vehicle for mobile game advertisers, Grossberg said.

With TreSensa’s user interface, brand and app install marketers can now create interactive ads in minutes and deploy them to thousands of mobile app destinations including Facebook, Snap, Google UAC, Unity, and more. 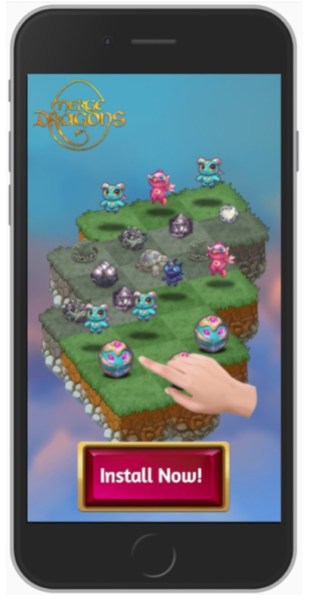 Plus, with its cloning and editing functionality, Creative Builder empowers marketers to easily create dozens of variations of premium quality playables that can be rapidly tested and optimized to drive optimal performance.

“TreSensa’s Creative Builder has brought impressive efficiency to our Merge Dragons playable marketing efforts,” said Tatyana Bogatyreva of Gram Games, in a statement. “We are able to build and version high quality playables at lightning speed, and automatically package them for distribution to our preferred mobile marketing channels. This efficiency has allowed us to quickly optimize our creatives, translating into superior overall business results.”

Grossberg said the company has come a long way. In 2011 to 2014, the company focused on its core creative technology. During that time, ads were a very small part of the overall app economy, with in-app purchases dominating monetization in mobile. During those year, TreSensa focused on distributing games on the mobile web. From 2015 onward, TreSensa shifted toward playable ads, particularly as mobile game developers tried ever harder to reach players who were resistant to many types of ads.

Brands like Mars Petcare, New Balance and Western Union, have adopted the playable ad format to help achieve their mobile marketing goals. The Interactive Advertising Bureau (iAB) is on board, as Grossberg is co-chairing (with Facebook) a new playable ads working group. TreSensa has 25 employees, and it has raised $10 million in two funding rounds.