Here’s a secret: Most Call of Duty players go straight to the multiplayer online combat and skip the single-player campaign. So when Treyarch decided to remake multiplayer in Call of Duty: Black Ops III, it was a big gamble. GamesBeat had a chance to talk to the studio’s leaders about the decisions they made as well as other changes to the rest of the game.

The next installment in the multibillion-dollar video game franchise is being built by a team of hundreds at Activision’s Treyarch studio in Santa Monica, Calif. By the time Black Ops III ships on Nov. 6, Treyarch will have worked on it for three years, a year longer than usual for a Call of Duty game, since Activision now has three studios trading off the duty, including Treyarch, Infinity Ward, and Sledgehammer Games.

Call of Duty has generated more than $10 billion in sales for Activision over the course of 12 years. And the prior two Black Ops games within the franchise have been played by almost 100 million players. In fact, more than 9 million still play those games every month. The question at hand is whether Call of Duty: Black Ops III will top those previous games and restore growth to the franchise. The quality of multiplayer will directly affect whether the upcoming triple-A release can top the past games.

Treyarch’s signature has been the Black Ops subfranchise, which is now set in the year 2060 and carries on the military-combat theme that combines realism and sci-fi.

Here’s an edited transcript of part two of our conversation. 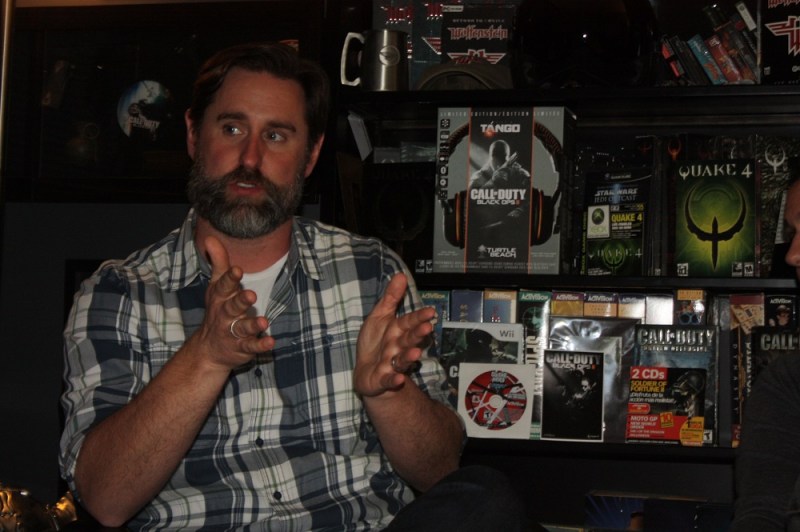 GamesBeat: Do you think multiplayer is easier or harder for people who aren’t terribly skillful like me?

Dan Bunting: I thought you were holding your own. I was watching you. You seemed to be doing pretty good. Generally I think multiplayer is actually easier. We talked about our philosophies about accessibility, even making it fun to fail. That risk-reward loop comes into that fun to fail sort of thing. It’s high-risk to jump into a wall-run, but even if you die in the process it’s just so much fun to do because it feels so good. But because it’s so fluid, people can get into it pretty easily. In general we’ve tried to make it as accessible as possible.

Mark Lamia: One of the things the team did a nice job with is, while the movement is fun — the advanced moves are fun to pull off — it’s not required. The paths are all there if you decide you don’t want to chain movement or wall-run or whatever. I do think you’re going to, because it’s fun and it’s super easy to use and accessible, but for players who don’t want to do that, it’s not a requirement. The game rewards players just fine who are about staying boots on the ground.

If you played Black Ops II, this should feel like a natural evolution of the momentum, but if you want to just play it like you did Black Ops II you can do that as well and be successful.

Bunting: The way the maps are designed, there’s a lot of pacing. We place a lot of cover around to give you safe spots to hang back and watch people approaching the objectives. There’s a lot of opportunities for players who may not be so skilled on the front lines to hold back and hone their skills at targeting.

Lamia: Map design is critical when you talk about accessibility and ease of play and things like that.

GamesBeat: Do you think the skills that players are learning right now playing Advanced Warfare are applicable here? Is that something you look at?

Bunting: We’ve thought about that a lot. As we talked about in the presentation, we started Black Ops III from the beginning around our DLC 1 launch in January 2013. This player movement agenda was something we started right off the bat. We were building off Black Ops II at that point in time.

We’ve watched how Advanced Warfare has evolved and how our own game has evolved a little differently. Players are going to adapt really quickly. We’ve done a lot of testing with focus groups and people who are coming off that game. It takes them about 10 seconds to adapt. The speed of Advanced Warfare is definitely going to get people accustomed to our game, which is slightly slower-paced, but it’s a good pace for Black Ops players. 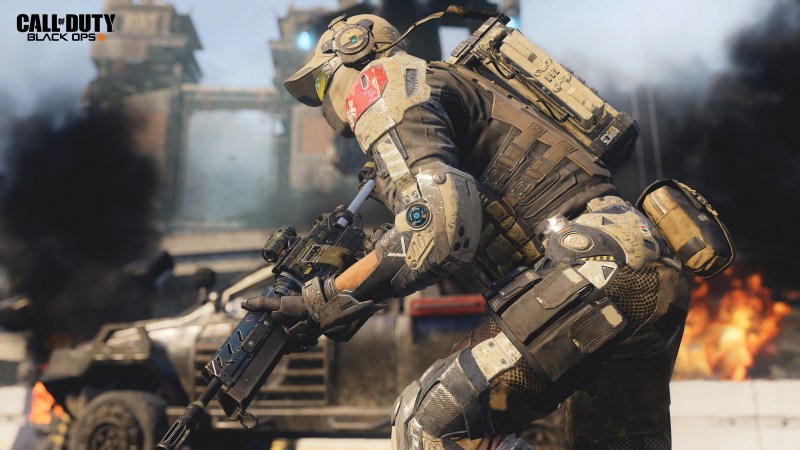 GamesBeat: Were there any major challenges to overcome with all these new abilities and new traversals, as far as the map design and not breaking the balance of the game?

Bunting: Absolutely. The first year of development, probably, trying to understand how to design maps for the new player movement abilities — like I talked about in there, we started getting a lot more verticality. It was breaking that fundamental principle of keeping the combat in frame. It just didn’t feel right. We kept bringing it down, down, down.

If you look at our previous games, we’ve kept combat spaces limited to no more than two stories at any given time. We started bringing it down where you’re still only ever dealing with two stories. You can’t get much higher than that. You might wall-run and get a boost off, but in those opportunities it’s going to be paced in a way that you’re going to keep that combat in frame as you’re focusing on that area.

Lamia: We had the core movement set in pretty quickly, but as far as the iteration — as you point out, movement goes hand in hand with map design. You have milliseconds to think about it. You should be in that map and not really have to think about whether you can pull off a particular move. It just has to be natural. You have to be able to look at it and you’re able to do it. There was a ton of iteration. We had a handful of maps where the artists really wanted to go at it, and we said, “Okay, we’re going to have you do some other work. Don’t detail this map.” Because the maps changed dramatically as we kept iterating to get the maps just right, hand in hand with the movement.

Bunting: Even early on, we were very sparse with our cover placement because of how mobile players were, because of how they were getting up in the air. That made it also not feel very good. As we started placing cover and getting those engagement ranges and the verticality down a bit, it started to feel better. I was watching some of you guys use cover in the game very well. The combat still feels very good as a boots on the ground sort of experience.