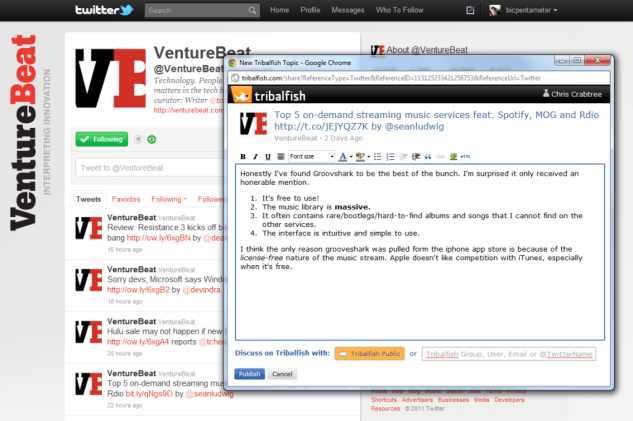 “The whole story is that we hope to extend the billions of interactions that take place on social networks and news sites or e-mail,” Lyle Ball, chief executive of Tribalfish told VentureBeat.

Once installed, the Tribalfish plugin shows a button next to tweets saying “discuss on Tribalfish.” When you click the button and enter your content, a discussion opens up below the tweet. The conversation occurs on the tweet’s designated page (see below image), not in the stream, and allows for anyone to participate if the comment is public. Comments can also be made private to specific Twitter users or Tribalfish groups, but you don’t need a Tribalfish account to post. You only need the plugin. You can access the same conversation on the Tribalfish site, however, should you have an account.

You can also tweet out a link and direct people to your discussion.

Most of our social networks task us with limiting expressions to a short and sweet format. Facebook’s statuses, though not as length-policed as Twitter, are meant to be a quick read on a news feed. Business social networks such as Yammer also keep the conversation minimalist. While you can reply to these messages, even on Twitter, you’re hard pressed to pontificate.

Because comments made through the Tribalfish plugin remain on Twitter, they truly do become an extension of the conversation, as opposed to a stream-clogging “@” war or separate instant message. 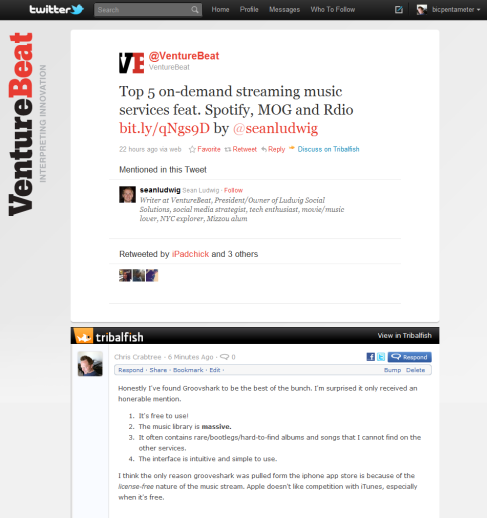 There are long form tweet options, however, such as Deck.ly, which haven’t been seeing the love from Twitter. Only a few days ago, Twitter’s management product TweetDeck killed off its Deck.ly integration, holding strong to the 140 character limit. Twitter has also recently taken on some integrations of its own such as photo uploads, casting off some third party developers such as TwitPic. The social network is, however, allowing third party developers to play with the photo application programming interface (API). We’ll have to wait to see if Twitter will turn its eyes on the browser plugin.

This is just the first in a planned line of integrations for Tribalfish. Next, the company wants to attack the news market and team up with publications to enhance the relationship between Tweets and news content. The company is also looking to raise its first round of funding and is planning for a range between $500,000 and $2 million in capital.

Tribalfish launched at the DEMO conference in Spring 2011 as Speaku. The company has raised a seed round under $100,000 from its founders.