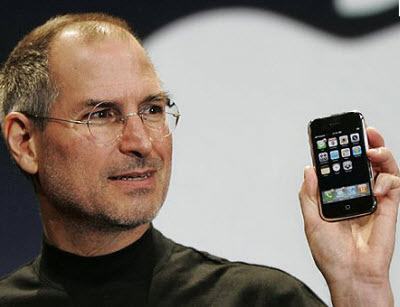 Reactions to the resignation of Steve Jobs are coming in and they aren’t surprising, given Jobs’ influence on technology over the course of decades. Jobs has left a huge legacy on the world’s business landscape, and his resignation is stirring a lot of emotions among business executives who look up to him.

People are having an emotional reaction, even though the market has had a lot of time to prepare for this. Apple’s stock price in after-hours trading is $357.10, down 5.07 percent. Apple’s valuation now is $348.75 billion. The valuation has slipped below that of Exxon Mobil, which is valued at $357.56 billion.

Jobs appears to be universally liked by Apple employees. Jobs has a 97 percent approval rating among Apple’s workers, according to nearly 1,000 reviews by Apple employees on Glassdoor, a jobs and career community. Jobs is the No. 3-highest-ranked CEO on Glassdoor of all CEOs ranked on the site.

“The world owes an enormous debt to Steve,” said Steve Perlman, the creator of Apple’s original QuickTime player and the current CEO of OnLive. “He has spearheaded so many of the tech and design paradigms that today we take for granted. Steve is one of the most influential and inspirational people of our era, and his direct leadership of Apple will be missed.”

“This is bad news.  Steve is a fighter, not a lover, and this means the fight is over,” said Trip Hawkins, who spent his early years working on multimedia at Apple and who is now CEO of Digital Chocolate. “Steve is the most remarkable person I have ever known.  I consider him the greatest CEO in history because he rescued Apple and Pixar at the same time, and both were major turnarounds.  Most CEOs never achieve a successful turnaround or even a pivot, and they are very hard to do in large corporations. Steve defined our generation and if the history books only mention one person from this period it will be him.”

“Sad to see Steve step down, but also sure that Apple will continue to be very successful and that his values and approaches have been effectively institutionalized,” said Neil Young, chief executive of Ngmoco, whose business includes making games for Apple devices.

“I feel overwhelming pain, sorrow and empathy for Steve and Laurene and their kids,” said Bing Gordon, a partner at venture capital firm Kleiner Perkins Caufield & Byers. [I feel] “hope that Apple’s leaders can maintain and grow his legacy. Awe to have lived and worked in the same era as steve jobs. Our industry will be diminished without his leadership.”

“Although we don’t personally know each other, I want to say thank you for being an inspiration to countless entrepreneurs such as myself to go out and “Think different,” said Nathan Lands, CEO and founder of Gamify. “Your story is an amazing and inspirational one, and the inspired beauty and soul you infused into every product is something I think will go down in history. Wishing you health and happiness.”

“Although we have anticipated Steve being gone from Apple, this reality is a harsh reminder of the legacy of Steve,” said Jay Elliot, former senior vice president of Apple and author of The Steve Jobs Way. “I am not sure we ever really thought this would happen. When I first met Steve in his late 20s, worked with him into his 30s and even meeting him several years ago, he is still that “kid” that has so much passion for his products as if time for Steve has stood still. Who else has founded a company and 35 years later is creating products for a new millennium. That is what we have lost.

Elliot added, “Apple will be OK with Tim Cook he is a solid executive who understands the real innovative operations of Apple and is able to execute Steve’s vision. But the “founder” is gone. Hard for me to believe. I view Steve as the worlds greatest consumer advocate we have ever had. Steve’s vision for products transcends all ages from school children to the elderly. Only Walt Disney ever effected us like Steve has!”

Apple co-founder Steve Wozniak also had a reaction in an interview with Bloomberg. “He’s going to go down in history as the most important technical leader ever,” said Wozniak.

What’s your own reaction? Please send it to us at tips@venturebeat.com or write it into the comments.