The first-person shooter Phantogeist has debuted as a social augmented reality game on Google Tango.

In this game from Chicago-based Trixi Studios, a friendly alien helps you identify nasty invading aliens and shoot them in the real world. You hold up a Tango-enabled smartphone, such as the Lenovo Phab 2 Pro, and look into the landscape around you. When you spot an enemy alien, you fire at it. The challenge is to spin around quickly to deal with the attackers coming at you from multiple directions.

“It is a first-person shooter where players can walk around, inside or outside, and fire at virtual enemies in the actual real world around them,” said Trixi owner Chip Sineni in an email to GamesBeat.

Phantogeist is social because it supports two local players at once. A partner interacts with the same creatures you see in the world, making virtual monsters seem more real when they are a shared experience. Sineni said this isn’t just an AR prototype; it’s a full game with story, co-op multiplayer, and survival modes and leaderboards.

The game is a little similar Pokemon Go, which has introduced a lot of people to AR, because it inserts virtual characters in the real-world environment. But it’s different because it’s an action game that requires you to spin around and shoot at creatures as they come at you from all directions.

“It is a glimpse into the future where augmented reality multiplayer games can lead to esport opportunities, where teams of players compete other in the real life world with virtual weapons,” Sineni said, though it’s worth noting that communities, not companies, decide what makes an esport.

Phantogeist also has a mode for using Tango motion-tracking for dynamic “Inside-Out” tracking of the enemy characters and even environments that form around them. This is similar to how future untethered virtual reality will work; the player just walks around a virtual environment with no cables attached to them and no external sensors set-up around them. 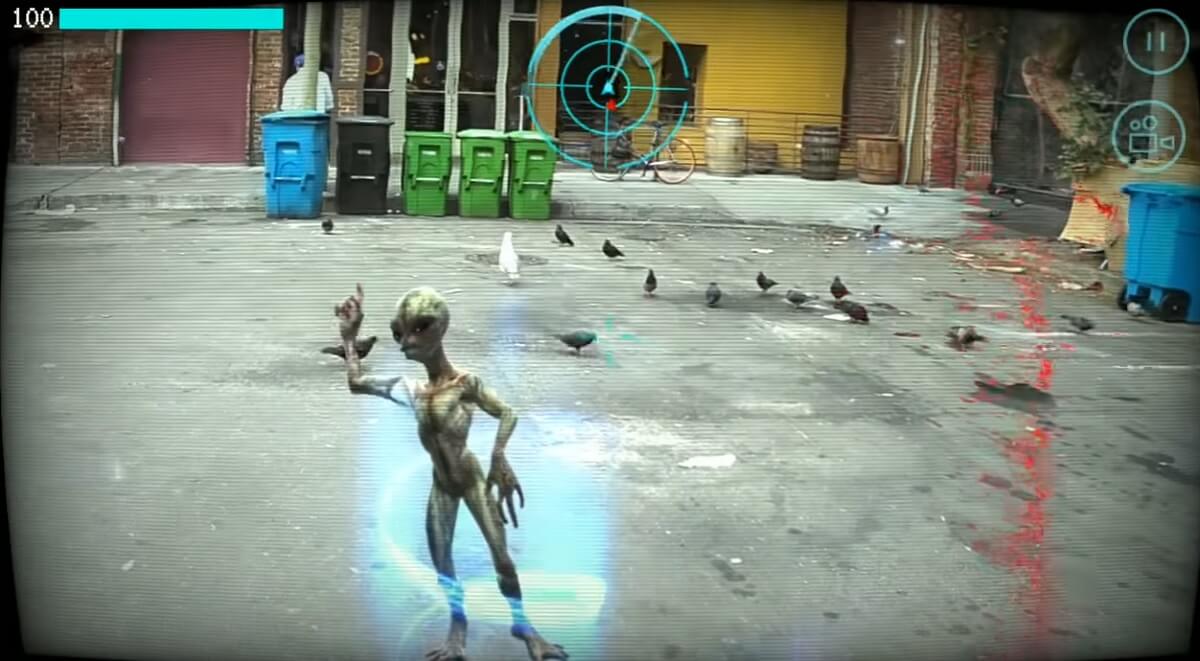 Above: Phantogeist has debuted on Google Tango.

Most AR games require a marker that the player needs to see with a device and keep in frame to play in the game. In Phantogeist, the player is free to play anywhere and move around as needed. Sineni, who has worked in the game industry fro 20 years at companies such as Viacom and Midway Games, acknowledged that AR development is tricky, and it has a big learning curve for developers.

“There is far less as a developer you can control in a user’s environment in AR, and you have to find a way for every gameplay situation to work in every real world location,” he said.

Trixi Studios started this year with a handful of people. The studio is self-funded. Sineni is also cofounder at Phosphor Games, a separate company that created the hit Brookhaven Experiment on Steam and PSVR.

“We really believe AR will permeate everything we do, and very few companies are tackling making polished, non-prototype games for it,” Sineni said. “We started Trixi to pioneer AR and wanted to discover the ways AR will work with games.

“There aren’t enough good game developers taking AR seriously enough. We are trying to push this envelope and move the industry forward. AR is fulfilling that dream of every kid who wish they saw a laser beam fire out of their toy gun, or wished that magical creatures really were all around you. AR really does have that potential to bring fantastical things to your everyday.”