TrueAnthem, an ad-supported music download service, is branching out into the world of ad tracking. We’ve always had some reservations about TrueAnthem’s service. The San Francisco-based startup works mostly with small, unsigned artists and has them read spoken ads in front of their songs, which really ruins the listening experience — at least for me. But it’s managed to sign up several big brands, like Nestlé, to its service. Now it’s providing tools to those brand marketers to help them track the performance of their viral campaigns.

Dubbed “Viral Brand Genome,” the new tool uses the company’s music/video tool, trueWidget. The widget can be embedded on social networks and lets users play and download artists’ songs for free, often with those nasty pre-song ads incorporated into the tracks. If the widget is embedded on, say, a Facebook page, the Viral Brand Genome tool lets advertisers compile details like which cities and regions are using the player most, or which users were instrumental in spreading it. 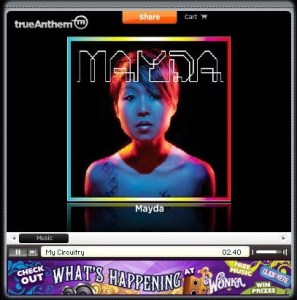 This information can be used to quantify the effectiveness of a given ad campaign, as well as characterize its success on a regional level. TrueAnthem has always had access to these analytics behind the scenes. But it hopes that by repackaging the information for advertisers, it can build value around its core product.

Adding to that value will be a forthcoming suite of additional performance tracking and customer relationship management  tools. However, for now, Nestlé will be leading the charge with Viral Brand Genome by using it to track its WONKA viral campaign.

In terms of monetizing music on the web, it makes sense for TrueAnthem to play matchmaker with emerging artists and big brands and to funnel those partnerships into an easy-to-use distribution/ad platform. But again, having the artists read/perform ads prior to every song is fundamentally grating. So while pairing its distribution tools with analytics services (much like TubeMogul, Visible Measures, Brightcove, etc.) is fundamentally a smart move, as far as I’m concerned the company’s success hangs more on it’s ability to clean up the listening experience than any extras it offers its advertisers.