Truecaller has unveiled a notable update to its eponymous iOS mobile app today, one that promises to bring spam identification to millions more people.

For the uninitiated, Truecaller has built a solid reputation for its crowdsourced community approach to helping users identify unknown telephone numbers, flag rogue callers, and automatically block accounts deemed as spam. Given the differing permissions available through Android and iOS mobile operating systems, the Swedish startup’s app has always been more functional on Android than on its Apple-owned counterpart, but that is about to change.

First announced at WWDC 2016 back in June, Apple’s new CallKit framework is a notable facet of iOS 10, which will be rolling out to the masses shortly, following an extended beta period. CallKit is made up of two key parts — one aimed at third-party VoIP companies, letting them build a tighter integration between an iPhone’s native interface and the VoIP app. The second element is the Call Directory extension, which allows Truecaller and similar companies to serve a pre-defined list of known spammers to the native phone app, so that incoming calls will display information from the Truecaller database — including whether the number is from a known spammer.

So with Truecaller and iOS 10 installed, your phone screen should look a little something like this, with users able to tell whether a call is legitimate or the number has been previously identified as spam. 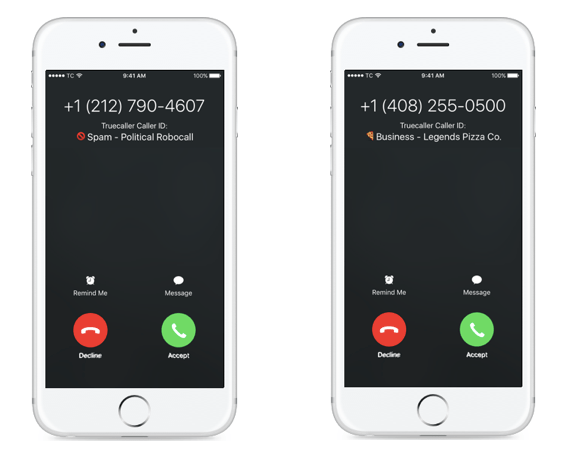 Additionally, Truecaller also now offers a My Block List feature that lets users see which numbers they’ve blocked and manage those numbers. To enable the new features, head to Settings>Phone>Call Blocking and Identification. 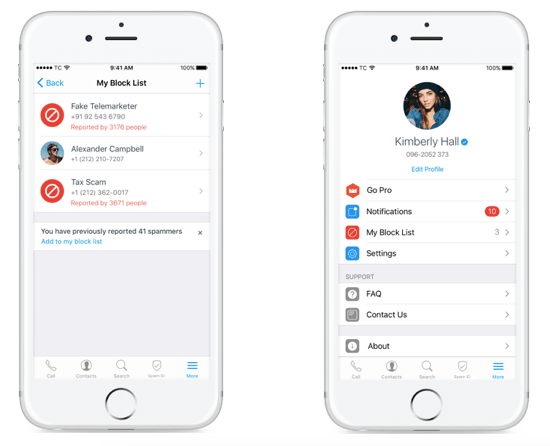 Truecaller has competitors — Facebook’s Hello app for Android launched last year, and app development agency Rocketship yesterday announced its new Callblock app for iOS 10. But Truecaller is probably the biggest and most recognized brand in the space, so its early move to embrace CallKit is noteworthy. Indeed, Truecaller actually worked with Apple on its development of the extension.

“Working closely with Apple over the past few months, we’re proud to bring a call solution to your iPhone to provide safe and authentic communication,” said Tom Hsieh, VP of partnerships and growth at Truecaller, in a statement. “With the massive increase in robocalls, telemarketing, and phone scams, it’s more important than ever to know who’s calling you. In our early testing, we’ve seen spam detection rates on iPhone increase by more than 50 percent in some markets, reaching upwards of 90 percent of all spam calls made to our users.”

Back in July, the chairman of the Federal Communications Commission (FCC) asked technology and telecom companies to “take immediate steps to make technology that blocks unwanted automated calls available to consumers at no charge.” A month later, Apple, Google, Microsoft, AT&T, and more than 30 companies joined a new “Robocall Strike Force” to work with the FCC with a view to thwarting rogue callers. So today’s move can be viewed within that context — as a shared push to use technology in the fight against spam.

Though Truecaller for iPhone is getting close to its Android brethren, it still lacks some smarts, including a full-featured live caller ID. But with its latest update, Truecaller could be about to find itself many more fans from iPhone users hoping for a little peace and quiet.