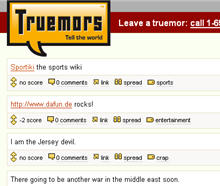 Guy Kawasaki’s new company Truemors, has launched, and it is a sort of Twitter for rumors.

It is noteworthy, because its a raw experiment at letting anyone post anything and letting the top-voted post float to the top in a section called “greatest.”

However, the site has been overrun largely by nonsense and spam — for example, rumors that a war is going to break out in the Middle East, to spam for “Sportiki” and “Dafun.”

Here’s how it works: You can call in a message to Truemors (or you text, or email), and leave your rumor. Kawasaki, a long-time consultant and investor in start-ups, was philosophical about the negative response even in the chatter leading up to the launch.

There’s a lesson here. The site had no focus, and thus no community. A moderator is also a good idea for such sites, because otherwise spam will prevail. There may still be hope for the “greatest” section of the site, where the most popular posts are ranked, and thus presumably only the best material is sifted. When we last looked, however, the top post was about how terrible Truemors is (update: the post has since been deleted). The site is worth watching, but as of now, a long shot.