If there’s a social/content network that could be voted as most likely to succeed in 2014, it just might be Yahoo’s biggest recent purchase, Tumblr.

That’s perhaps odd to say, as the massively popular network of microblogs currently hosts almost 150 million blogs, sees 99 million posts every day, has over 65 billion posts, and has a very nice site ranking of fifth in the U.S. In other words, it has already succeeded.

Monetization has lagged, however. But that may be about to change.

A new Adobe digital ad study has found that Tumblr’s value to advertisers has been undervalued by a huge margin — as much as 450 percent. That’s due to both the nature of the network itself, and to its place in the digital purchasing pipeline.

“Social media is often not the last thing you do before you buy … it’s often the first thing,” Adobe’s digital ad analyst Tamara Gaffney told me last week. “So advertisers are undervaluing social … especially Tumblr.” 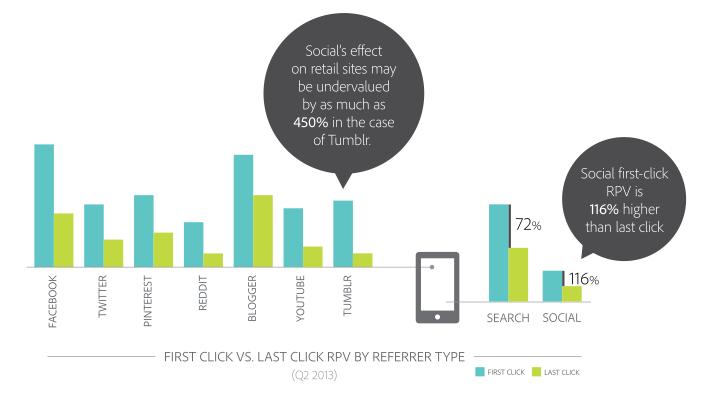 Advertisers measure the return on investment of marketing activities in many ways, including first click and last click. As web buyers navigate through a purchase decision, they may hit five or six sites to gather information about a product, competing products, and the best place to buy. Often a buyer’s first click, and first influence, is a social site. But currently, due to the state of revenue attribution tools available today, those early clicks are undervalued.

As it turns out, Adobe says, the eventual revenue per visitor of people whose intent to buy originates on Tumblr is huge. But since it’s not the last click, that value is under-appreciated.

That could change soon — as soon as 2014. “Next year, we’ll see better attribution tools,” Gaffney says.

There might be a good reason why Tumblr is so effective at driving sales. It seems to be the place you go when you want to rave about something good.

“We wanted to see who was the happiest network,” Gaffney told me. “Turns out it was Tumblr — Tumblr is the happiest social network … you don’t go to Tumblr to rant.” 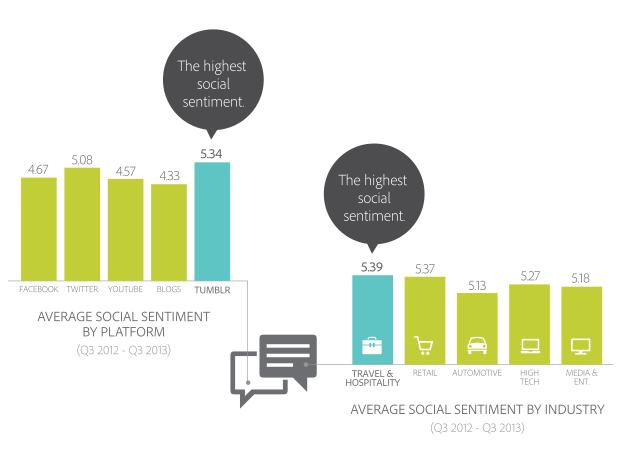 Adobe’s study is based on 130 billion Facebook likes, over a billion Facebook posts, 2.3 billion comments, likes, and shares, and more than 400 million unique visitors to social sites, so the company has a pretty good view of what’s happening in social and in advertising.

And it seems like very good news for Tumblr — and Yahoo.